Rather than create a physical exhibition in a gallery, the charity has taken to the web and launched one online,  telling the story of its work and history. 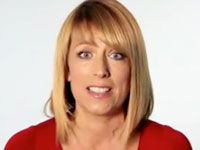 The main feature is a shareable infographic, covering the entirety of the charity’s work. This acts as the homepage to the website. From there, visitors can explore 40 multimedia stories covering five different themes: emergencies, education, child sponsorship, supporters and campaigning.

What’s special about it?

Visitors also have the opportunity to upload stories about their experience of the charity on Facebook.

The charity has also enlisted the help of its celebrity supporters, including the actors Fay Ripley (above), Samantha Womack and Katherine Kelly, to narrate a short film talking about the charity’s greatest achievements throughout its 40-year history. Several celebrities, such as Gabby Logan, have also filmed separate videos in which they were challenged to tell a story in 40 seconds. At the end they ask the visitor to watch the ActionAid video documenting its history.

Why has the charity done it?

Stuart Fowkes, head of PR at ActionAid UK, said: "As we approached our 40th anniversary, we were thinking of how we could get people to find out more about our history. Deciding to hold the exhibition online meant that our work would have a wider reach.

"The infographic will be regularly updated, making it a living and breathing ‘about us’ section on the website that is engaging and shareable."

The infographic is a more lively and interesting way to present information about the charity than plain text. Making the content shareable is a great way of encouraging supporters to spread the word about the charity, while asking the public to write on its Facebook wall makes the campaign more interactive.