- The actor Amanda Redman has become a patron of the Blond McIndoe Research Foundation, which carries out research into the treatment of burns patients. Redman suffered third-degree burns to 75 per cent of her body at the age of 15 months when she was accidentally scalded in the kitchen by a pan of boiling soup. "I am thrilled to be able to help this charity, which means so much to me," she said. "Having experienced a burns accident myself, I have some insight into the needs of burns patients and a desire to see treatments improved so patients can be healed more quickly and effectively."

- The Paralympic swimmer Ellie Simmonds visited the headquarters of Hearing Dogs for Deaf People to meet a cocker spaniel puppy that has been named after her. The charity named a litter of 10 puppies after people who have "inspired a generation" in 2012, including Simmonds and the athletes Jessica Ennis, Mo Farah and Usain Bolt. 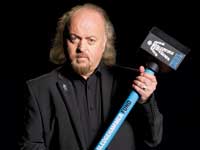 The comedian Bill Bailey (right) is appearing in a series of TV, digital and print advertisements to raise awareness of Prostate Cancer UK's Sledgehammer Fund, which will raise money for research into prostate cancer. Bailey, whose father-in-law has survived prostate cancer, said: "I campaign only for the things I believe in, and I feel very strongly about this."

- The actor Sir Patrick Stewart features in a new promotional film for Macmillan Cancer Support designed to tackle ageism in the NHS. The film, which tells the stories of three older people who are defying stereotypes associated with their age, is part of Macmillan's Age Old Excuse campaign. This calls for older people to be offered cancer treatment based on their fitness rather than their age.

- The boy band One Direction showed their support for the Alzheimer's Society by donating a signed T-shirt to be auctioned to raise funds. The item sold for £1,220 in an online auction.