Analysis: "A crying shame - it should be gifted back to the village"

I ask the man behind the shop counter if the dispute is a talking point, but the woman behind the counter of the post office cuts in.

"We won't make a comment," she says. "You need to speak to Alan Ground at the parish council because it's their baby."

Ground has turned down my request for a meeting, so I talk to a retired man who has braved the rain to walk his dog past the boarded-up school. He declines to be named, but says that he would like to see the building turned into a health centre. He thinks the Diocese of Guildford "just want to see the building crumble and sell it off".

A parent who lives near the school, who also declines to be named, says: "A doctor's clinic would probably be the best use of it - it's a crying shame it's not being used, it should be gifted back to the village. They let it fail as a school - the kids were coming out under-educated."

He doubts that there are enough children in the village to make it viable as a state school. His partner adds that they would be reluctant to take their children out of their current school and put them in a re 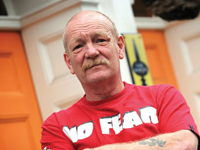 opened Dunsfold school: "It has gone to ruins once - it could happen again."

Katherine Remnant, whose daughter attended the school, says it would be good to have a school again. "It would be nice to have a focal point, and would help people to get to know each other," she says. "Dunsfold is quite a divided place - there are the people who have lots of money, and the people who don't."

She says other community uses could include allotments, but her school-age daughter disagrees. "There's nothing for people my age to do - I think it should be a cafe," she says.

Alan Straffon is enjoying a lunchtime pint in the Sun Inn. "It's a disgrace - it's been left to rack and ruin," he says. "The diocese is trying to get out of its responsibilities. We're never informed about anything unless the school is broken into". Lead has been stolen from the roof, he says. 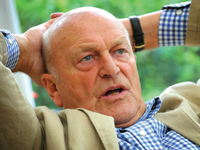 Finally I visit Larry Westland, who founded the music education charity Music for Youth, and his wife and two dogs.

He supports Ground's bid to establish a nursery school, though he sympathises with the Diocese of Guildford's position.

"The church is pushed - it needs more capital in its business, which is understandable," he says. "But they have let it get into a state of disrepair - they could have taken care of the fabric of the building."

If it was used for non-educational purposes, Westland says, he would support a community facility for clubs and meetings.

He would prefer it if the site was not sold off for housing, but says "if it was decided that it would not be used for the village community, then I would support affordable housing for local people".

His main concern is losing any chance of having a school: "A lot of younger people are moving in and there are sufficient children to make it successful."

He is confident that the community would be able to raise funds for the school and highlights the recent rescue of the village shop and post office as evidence.

- See our analysis on the long-running dispute