Analysis: Academy schools - charities, but not as we know them

Academy schools were granted exempt charity status in 2010, but are they are sufficiently independent to be charities? Andy Hillier reports

When Neil McIntosh delivered his leaving speech after 22 years as chief executive of the education charity CfBT late last year, he used the occasion to highlight his concerns about the charitable status of academy schools.

McIntosh, who has worked in management roles in the charity sector for more than 30 years, argued that the academies model potentially compromised "the essential distinctiveness of the third sector".

Academies were granted exempt charity status in 2010 (see "How academy schools are overseen", opposite page), but McIntosh said that they were set apart from the voluntary sector because they had been set up by the public sector, were totally funded by the government and were subject to a regulatory regime overseen by a politician. He contended that academies "are, at their weakest, agencies that are independent in name only. And perhaps not even in that."

McIntosh "is definitely on to something", says Rosie Chapman, an independent consultant and former director of policy at the Charity Commission. "There's a tension between government wanting to transfer public services and direct accountability for those services, while at the same time wanting to retain public sector-style governance and control arrangements," she says.

The points McIntosh raised about academies being set up by the public sector and getting 100 per cent of their funding from the government don't necessarily make them unique among charities, says Chapman. She says that charities such as the Canal & River Trust (formerly British Waterways) were set up by the government, and that others rely solely or heavily on state funding.

Chapman is concerned, however, about the regulatory regime of academies. The Secretary of State for Education is currently the principal regulator of academies and day-to-day oversight of them falls to the Education Funding Agency, an executive agency of the Department for Education.

"I think it's wrong that an agency of the DfE is, in theory, the regulator for them now," she says. "There are some similarities with housing associations, but those charities have a sufficiently independent regulator with a respected chair. With academies, you look at the website of the Education Funding Agency and it doesn't look like a regulator at all."

She adds that it is hard to track down the annual reports of most academies because they don't make them public on their websites.

The government exerts power over academies through the funding agreements that are in place. According to Tom Murdoch, an associate at the law firm Stone King, this arrangement poses some interesting questions because the Charity Commission's RR7 guidance on the independence of charities from the state makes it clear that funding agreements are instruments of potential control that could be used improperly to fetter the discretion of the trustees.

But he adds: "The commission's basic position is that, so long as the influence relates to funding itself, then that's potentially legitimate - and I think that applies to academies."

He notes that the latest funding agreements for academies, issued by the DfE in December, do give them increased independence. "They allow the governors to change their articles of association, which wasn't previously possible," says Murdoch. "They also remove the capacity of the Secretary of State for Education to remove governors. By removing these, they're moving in the right direction."

Mary Groom, a partner at the law firm Bates Wells & Braithwaite, says this change is a significant development. The previous arrangement allowed the education secretary to "reach through the funding agreement into the governance of the academy company", says Groom, which was a "step too far for charity law purposes".

She believes, however, that the memorandum of understanding drawn up between the Charity Commission and the DfE, which lays out which body is responsible for which aspects of regulation of exempt education charities, is a sensible way to regulate academies. "The commission doesn't have the capacity to regulate all of the academies in the country for charity law purposes," says Groom. "A sensible way forward is to work with the DfE around charity and regulation."

The governance arrangements of academies have been another cause for consternation. A report published last month by the Academies Commission - an independent body made up of senior education professionals backed by the Royal Society of Arts and the Pearson Think Tank - expressed concern that academies are required to have employees as trustees, with the head teacher and a representative of the teaching staff expected to be trustees of the academy trust. Most mainstream charities do not have members of staff on their trustee boards. The Academies Commission fears this arrangement is too "cosy" and has called for the roles to be "sufficiently separate", to ensure that the trustees are able to hold head teachers to account.

Speaking to Third Sector, McIntosh says that this arrangement potentially puts many head teachers and senior executives "in too powerful a position", especially when it comes to setting salaries. He points out that there is growing evidence of head teachers and other senior staff who work at academies paying themselves inflated salaries.

"I don't think that some of the people merit the salaries being paid," he says. "Some schools are good at giving people high salaries but not very good at performance management."

He argues that the issue could be addressed by removing the exempt charity status of academies and returning them to the regulatory fold of the Charity Commission, where they would be required to publish their accounts on the regulator's website.

But a spokeswoman for the Department for Education says it is trying to reduce the level of bureaucracy for schools. "While academies are exempt charities, we work closely with the Charity Commission and can still ask it to use its regulatory powers if necessary," she says.

She says academy schools are required by law to publish accounts and the financial accountability systems in place for them are more rigorous than those in place for council-run schools.

REGULATION: How academy schools are overseen

Academies were created as a new type of school by the Learning and Skills Act 2000. Academy trusts, the companies that run academies, are charities in law, and the first 200 trusts were required to register with the Charity Commission.

The Academies Act 2010 granted academy trusts exempt charity status, making them exempt from registration with and primary regulation by the Charity Commission, from 1 August 2011. They are no longer listed on the commission's website.

The Secretary of State for Education is now the principal regulator of academies and oversees their compliance with both charity and education law. But the education secretary has handed over the role of funding distribution and compliance for academies to the Education Funding Agency, which is an executive agency of the department. Academy trusts must also file their accounts with Companies House.

Academies must continue to follow the statement of recommended practice when they prepare their accounts and make them available on request, although they can charge for doing the latter.

As exempt charities, they are entitled to the same financial benefits as registered charities, including relief from income, corporation and capital gains tax. They also receive relief from business and non-domestic rates.

The trustees of an exempt charity are required to perform the same general duties as those of other charities, which include acting reasonably and prudently in all matters relating to the charity.

A memorandum of understanding was agreed last July between the Charity Commission and the Department for Education, outlining their regulatory roles for exempt charities, including academy trusts.

In its recent submission to the Academies Commission, the Charity Commission raised concerns about the perceived lack of financial transparency of academies now they're no longer listed on its website, and said it was discussing the matter with the DfE. The regulator said that academies "could do more" to involve parents and the wider community in their governance arrangements.

E-Act is one of the biggest academy trusts in England and sponsors 31 academies and free schools.

The trust's turnover for 2012/13 will be £130m, and all of its income comes from the Department for Education. 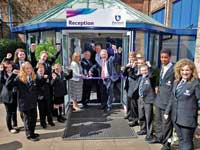 Sir Bruce Liddington, director general of E-Act, believes that the way in which academies are regulated is robust. He says academies are open about their finances, pointing out that they must file their accounts with Companies House because of their status as charitable companies. "I would say that we're more transparent than local authority-run schools," he says.

E-Act used to supply its accounts to the Charity Commission, before that requirement was removed by the DfE.

Liddington says that E-Act's governance arrangements stand up to scrutiny. Five of its board members are chairs of governors at E-Act academies or free schools, and they have been elected to the board by the 31 chairs of its schools. The only member of E-Act's executive team who sits on the board is Liddington, and no principals or head teachers are represented.

He describes E-Act as a "moderate payer" when it comes to staff salaries and says it is open about how much it pays.

"We advertise our jobs widely in trade publications, and how much we pay is traceable through our accounts," says Liddington. "We're a national chain; we find that we can recruit good people without the need to pay excessive salaries."