When charities are forced to make redundancies, some bring in more volunteers. Stephen Cook and Ben Cook discover that it's a sensitive subject in the sector, and Mark Wilding talks to three charities about how they're handling it

Organisational change consultant Lynn Blackadder says the change of wording from negative to positive indicates the strength of debate about increasing the role of volunteers in hard economic times. Is it a bad thing, undermining paid employment and expertise, or a good one, fostering voluntary action and maintaining services that might otherwise close?

The Hampshire example comes from the public sector, but Blackadder says it's a dilemma that more charities and voluntary organisations face as cuts and redundancies multiply. "It's there increasingly in organisations I work with, and people are talking about it a lot," she says.

"As far as I can see, nobody has quite thought about how ethical it is to do this and make librarians redundant", she says. "Nor has anybody considered whether professional services can or should be staffed by volunteers."

Blackadder has started a debate on this, with articles and blogs drawing a distinction between unacceptable job 'displacement', when paid staff are made redundant so volunteers can fill their roles, and 'replacement', when staff leave in the normal way and their roles are filled by volunteers. But when redundancies are unavoidable, she says, the situation is tantamount to replacement.

"They're not being made redundant so volunteers can take over - they're being made redundant regardless," she says. "Whatever we call it, the results are going to be the same. Faced with two undesirable redundancy situations - letting all staff go and closing an organisation, or retaining a skeleton staff and increasing the number of volunteers - I would advocate the latter every time."

She adds, however, that there are always limits to what volunteers want to do and are capable of doing and that the ideal model in any financial climate is a mixed approach, with paid staff and volunteers working together.

Justin Davis Smith, chief executive of Volunteering England, says his organisation stresses the importance of involving volunteers appropriately. "Far from being a replacement for paid staff, volunteers add value, complementing the work of employees," he says. "Volunteers should never be considered as free labour and it is never right to directly replace someone who has been made redundant with a volunteer."

This is clearly a harder line than that taken by Blackadder. But, like her, Davis Smith emphasises how complex and difficult decisions often are. "We do understand that the issue is not always clear cut," he says. "Many organisations are involved in delivering services that people rely on, and it is understandable that they might look to increase the involvement of volunteers before withdrawing the service altogether.

"We maintain that volunteers cannot simply be parachuted into roles that were previously filled by paid staff. But this does not mean that a service can't be reviewed in light of funding changes and a new model developed that increases the involvement of volunteers."

The extent of change in the sector's balance between paid staff and volunteers is hard to quantify. The National Council for Voluntary Organisations says there is only anecdotal evidence; Harris agrees and says: " In any case, most voluntary organisations will be very wary of admitting that they are, as it were, replacing paid staff with volunteers."

This was borne out when Third Sector approached charities about the expansion in the use of volunteers: many declined to discuss it. However, three gave accounts of their experience in our case studies.

The RNLI has traditionally recruited volunteers as fundraisers or crew members. But in 2010, the charity started to look at how it could involve them in more innovative ways.

This led to the publication of a volunteer strategy in May of that year, which said the charity would look into "non-traditional" areas for volunteers. 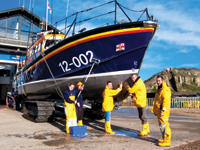 Will Stephens, volunteer strategy manager, says he has been staggered by the number of skilled people who have offered their time. The volunteers with specialist skills include an expert in maritime law, a human resources director, accountants and tour guides.

Chief executive Paul Boissier says the charity is now making use of volunteers in skilled or specialist roles that might not otherwise justify full-time paid positions. He says they are not replacing staff.

"Volunteers are not filling posts that have been made vacant," he says. "But there are little gaps that we need people with specific skills to come and fill. Before we might have had to go out and recruit someone and we would then have had to find them additional work to do after the project was finished."

Last year, the RNLI recruited 60 non-traditional volunteers. This year, 100 have so far offered their time. The charity estimates that these people helped it save £60,000 last year and will help it save £280,000 this year.

Boissier says: "For all of us, paid staff are a real cost-driver. This is clearly the way the charity can work within the bounds of the generosity of the public."

East London HIV charity Positive East had to make some tough decisions this year when its funding fell by 25 per cent.

"We've had to reduce our staff by seven full-time-equivalent roles," says director Mark Santos. "It was a big hit to the charity." Thirty-eight paid roles were reduced to 31. 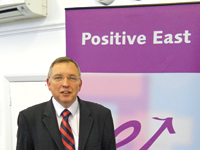 Five years ago, Positive East embarked on a programme to make volunteering central to the charity's activities. "We've really ramped up the number of volunteers," says Santos.

The charity now has 133 volunteers and wants more. "The idea is to continue to increase the number of volunteers," he says.

Santos says the decision to make greater use of volunteers was made long before cuts led to staff reductions, but it has helped to soften the blow.

The benefits of using more volunteers are more than financial. Many are former beneficiaries and have first-hand experience of counselling and peer support.

Mike Reardon, chair of Positive East, says: "In line with the big society, we have found clients have come into the organisation, been supported and gone into volunteer roles."

Volunteers are asked to sign 'contracts', but Reardon says both sides benefit. "Part of the deal is that they get qualifications themselves," he says. "It has to be a win-win situation. It's not just a case of utilising their time without actually looking at what we can do for them."

Community Action Derby used to pay someone to run a volunteer centre but changed the position to a volunteer supervisor role. The volunteer programme costs between £2,000 and £3,000 a year to run, but the number of people registered with it has increased from 1,200 to 3,300 since it was staffed by a volunteer. 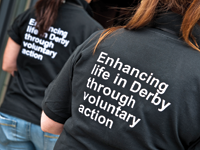 The charity has had to make other tough staffing decisions. "We have a volunteer team running our reception, which was driven by funding cuts," says deputy chief executive Matthew Allbones. "Eight to 10 volunteers cover a two-person reception role."

Allbones says that the charity would not seek to replace staff roles with volunteers. "That suggestion implies a choice," he says. "That's not the case. With the resources we've got, this is how we can best deliver the service to the public."

Allbones says some roles, such as managerial positions, are not suitable for volunteers because of the level of responsibility required. "It's fundamentally wrong to replace paid staff with volunteers, but there are functions within those roles that volunteers can pick up," he says.

He points out that volunteers need training and supervision and replacements must always be on hand. "Volunteers can deliver a whole range of services, but it can be done only within a properly structured and resourced programme," says Allbones.