Election rules were putting charity campaigning under pressure even before the lobbying bill proposed to tighten them. Stephen Cook reports

During the 2010 general election, Stop Climate Chaos, a coalition of charities and campaigning groups, wanted to publish its policy position on its website and to encourage parliamentary candidates who agreed with it to endorse it.

It seemed clear that the proposal did not contravene Charity Commission rules on campaigning and elections, which make it clear that charities can publicise the views of candidates about policies they propose in pursuit of their charitable purposes, provided that they do not encourage support for particular parties or candidates. But SCC was advised by its lawyers that if it wanted to go ahead, it would have to register with the Electoral Commission as a so-called non-party campaigner and to conform to rules on spending limits and reporting laid down in the Political Parties, Elections and Referendums Act 2000.

The coalition decided not to go ahead because it did not want, for public relations reasons, to be registered with the Electoral Commission as a non-party campaigner; it did not want people to perceive it as a political organisation rather than a campaigning group. For the same reason, it also abandoned plans for an interactive forum on its website for fear that it would be caught by the rules if contributors to the forum mentioned particular parties or candidates. So SCC confined itself instead to activities that it was advised would escape the requirement to register, such as encouraging supporters to hold hustings for local candidates - with the proviso that there could be no post-event publicity unless all candidates had attended. It also held a national debate with representatives from the main parties, who offered messages of support. "We are not party political, but we want political support for our policies," says Fiona Dear, the coordinator of SCC. "We were advised that a lot of our material was in danger of being caught. We had to be careful about what we did." 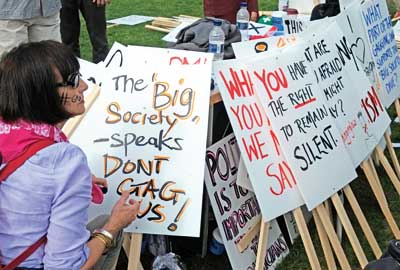 These provisions of the PPERA came into focus again last week because of the continuing battle over the Transparency of Lobbying, Non-Party Campaigning and Trade Union Administration Bill, which had initially proposed tightening the PPERA definition of activity that would require organisations to register with the commission. In the end, the government agreed to go back to the PPERA wording (see briefing, below).

But the spotlight on the issue brought to light growing concerns among charities that even the PPERA wording was a significant brake on what they regard as legitimate campaigning activities. Like Stop Climate Chaos, other charities had problems with the wording and associated guidance from the Electoral Commission in the weeks before the 2010 election.

Mike Parkinson, policy adviser at Oxfam, says it was, for example, supporting the proposal for a "Robin Hood tax" - a levy on financial transactions to finance international development. "But what if a minority party that supported the tax joined in and started saying 'we have got Oxfam on our side'?

"As it turned out it wasn't a major issue because the guidance only came out a few weeks before the election. But there are serious concerns for the future about things charities have often done in the past, such as comparing manifestos without supporting particular parties."

Other examples cited by the National Council for Voluntary Organisations as it argued last week for a softer wording and changes in other aspects of the bill was the fear of the Royal British Legion that it would in future have to stop asking election candidates if they would "do their bit" and publishing their pictures if they agreed to sign a pledge.

"A health charity could publish a leaflet highlighting the dangers of smoking," the NCVO said in a briefing to MPs. "If smoking legislation became a party political issue in an election, this activity could be deemed to have the effect of supporting a party's campaign, and be subject to regulation."

So the first reason why the sector remains unhappy with the bill and will continue to campaign against it as it goes through the Lords is that it is not reassured by the government's reversion to the existing wording because it has realised that the existing wording is already having an inhibiting effect on sector campaigning.

But the second reason is that the reversion to the existing wording comes in the context of other new restrictions on which the government has made no concession - a lowering of the spending threshold at which non-party campaigners have to register with the Electoral Commission, reductions of 60 per cent in their spending limits nationally and at constituency level, widening of the activities that count towards those spending limits, the inclusion of staff costs in the spending limits and stricter accounting.

Like Stop Climate Chaos, many charities appear to be reluctant to register as non-party campaigners with the Electoral Commission because they fear that it will associate them too strongly in the public mind with political parties and the political process. At the 2010 election, only two charities registered with the commission.

But whatever happens to the lobbying bill, it seems highly likely that there will be greater scrutiny of charity campaigning at the next election, with the possible result that some charities will decide to opt out of such campaigning unless the bill is softened in the Lords. Others might bite the bullet and register with the commission in order to minimise the possibility of being challenged.

BRIEFING: THE UNEXPECTED APPEARANCE OF A CONTROVERSIAL PIECE OF LEGISLATION

The coalition agreement between the Conservatives and the Liberal Democrats after the 2010 election included a pledge to set up a register of lobbyists. The Prime Minister, David Cameron, had warned in 2009 that lobbying could be "the next big scandal".

At first it seemed that a wide and comprehensive register was being proposed, and there was debate about whether charities should be on it. But it became clear last year that the register would include only lobbying consultancies.

When the bill to set up the register was finally published on 17 July, it contained two surprises: measures to tighten the rules on spending during election campaigns by those not actually standing for election or registered as political parties, and measures to tighten requirements for trade unions to keep their lists of members up to date. Hence its name: the Transparency of Lobbying, Non-Party Campaigning and Trade Union Administration Bill.

The government said that the new measures were part of its drive to increase the accountability of the political process and to ensure that it did not fall prey to "opaque and unaccountable groups" that spend millions trying to influence elections. But charities quickly realised that these measures could affect the campaigning they do on subjects that have a political dimension. Charities cannot have political purposes or support particular parties or candidates, but are permitted to campaign for political change that furthers their charitable objects.

Part two of the bill originally proposed tightening existing rules in the Political Parties, Elections and Referendums Act 2000, which say that if any organisation, in the year before an election, conducts activities that can be "reasonably regarded as intended" to promote the success of a particular party or candidate, it must register with the Electoral Commission if it spends more than £10,000 in England (£5,000 in Scotland, Wales and Northern Ireland) and spend no more than £988,500 across the UK.

When it was first published, the lobbying bill proposed to change the definition to activities "for the purpose of or in connection with" promoting the success of a party or candidate. It also proposed to reduce the registration threshold to £5,000 (£2,000 in Scotland, Wales and Northern Ireland) and to reduce the level of total spending to £390,000.

It also proposed to widen the range of activities that would be caught from "election material" to specifically include advertising, press conferences and media events, transport, market research and canvassing, rallies and public events.

Charities, led by the National Council for Voluntary Organisations and the charity chief executives body Acevo, protested about part two of the bill because they felt it would inhibit many charities from carrying out their normal, legitimate activities during election campaigns. 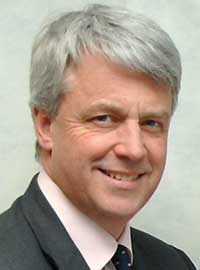 Andrew Lansley (right), leader of the House of Commons, met sector leaders and agreed to introduce amendments at last week's report stage that restored the definition contained in the PPERA - that only activity that "could reasonably be regarded as intended" to favour particular parties or candidates would be caught. However, he did not agree to change the proposed new thresholds, spending limits or range of activities.

The NCVO and Acevo said this did not go far enough and urged MPs to back a Labour amendment saying that activities would be caught only if their "primary purpose" was to support particular parties or candidates. But this was narrowly voted down by the Commons, as were amendments cancelling thresholds and spending limits.

Lansley has said that the government's changes to the bill "should provide some reassurance that if charities are campaigning on any policy issue, from cancer care to war veterans, they will be able to conduct their normal range of activity exactly as they always have". But the bill is expected to meet further stiff resistance when it goes to the House of Lords next week.