Analysis: Cash machines will boost giving - but by how much?

The experience of HSBC suggests that donations by cash machines could top £5m. David Ainsworth explores what the total might be and whether a universal system for adding Gift Aid might be possible

So far this year, HSBC account holders have donated, through the bank's own 2,500 cash machines, £84,000 to the bank's chosen charities, as well as £68,000 to the Disasters Emergency Committee appeal for the victims of the Japanese earthquake and tsunami.

If all of the UK's 40,000 free-to-use cash machines were able to accept donations, the HSBC figures suggest that total giving by this method could total about £5m a year. However, the figures come from a system that allows people to give only at machines operated by their own bank.

With the proposed Link-based system, people would be able to donate at almost any machine in the country. There is, however, no precedent to inform an estimate of the extent to which this might drive up donations. The Cabinet Office hopes the increase will be significant and that donations become a normal part of the 10 million cash machine transactions in the UK every day.

Peter Bull, head of community investment at HSBC, says that the new scheme will not only expand the potential number of givers (only 12 per cent of UK current account holders are with HSBC), but will get them used to the idea.

"The more common it becomes, the more people will do it," he says. "If all cash machines offer the option, it will be more usual to give this way."

The view from the voluntary sector is cautious. "It's another option for donors," says Louise Richards, director of policy and campaigns at the Institute of Fundraising. "We will have to wait and see whether it's an effective tool for growing giving."

James Allen, policy manager at the National Council for Voluntary Organisations, says he is concerned about whether ATM giving will simply replace other forms of donation, and will not actually bring in new money. "I think some people will substitute it for other forms of giving, and some will give who otherwise wouldn't have," he says.

Gift Aid - The technology might not permit a universal system

Another major question is whether it will be possible, under the proposed scheme, for people to add Gift Aid to their donations when giving at a cash machine.

The existing HSBC scheme allows people to add Gift Aid by pressing the appropriate button. This authorises the bank to send the account holder's name and address to the charity that he or she has donated to.

People currently add Gift Aid on only 13 per cent of donations, according to HSBC, but the proportion varies considerably for different causes. For donations to DEC appeals, the proportion with added Gift Aid rises to about half. 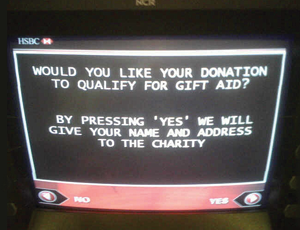 However, the HSBC scheme is much simpler than the proposed Link scheme as it is only offered to the bank's own customers using the bank's own machines. Because the bank already has the details of its customers, it is able to pass on enough information to satisfy HM Revenue & Customs, which supervises the Gift Aid system.

The new scheme will allow donors to give money at almost any cash machine, not just those operated by their own bank. This will mean that much less information about the donor is easily available.

The Cabinet Office says it is discussing with Link and the Treasury how Gift Aid could be made available on all donations at all machines. It says the will exists on all sides to develop an effective solution, but it could prove impossible because of technical difficulties.

The banks will be able to use the "small donations" scheme, introduced in the last Budget, which allows the first £5,000 given to each charity to be Gift Aided without a declaration by donors that they are taxpayers. This will be helpful for small organisations.