Many charities seek celebrity endorsement because they believe it will increase coverage and raise their profile. Dan Brockington's academic research suggests that celebrity stories - now less common in newspapers - impinge on a limited group and might promote the wrong values. In a related article, John Plummer finds charities are still committed to working with celebrities.

Exploring the relations between celebrity and charity produces a number of surprises. The first is how recently relations between charities and the celebrity industry really began to get organised. Most charities appointed their first celebrity liaison staff during the past 10 years, for example. Since 2003, the Media Trust has organised celebrity advice workshops for charities. About seven years ago the Red Pages, which provides contact details for celebrities, began listing celebrities' ailments to help health charities target the right people; in 2007, it also launched a weekly newsletter detailing deals between celebrities, brands and charities. Third Sector's weekly column on celebrities began in 2005, and the websites Look to the Stars and Ecorazzi, both documenting celebrity activity for good causes, were set up in 2006. But despite the fact that these developments are relatively recent, charities are now a recognised part of the celebrity news economy, and celebrity magazines often try to gain access to public figures through their charitable connections.

The second surprise is that these closer relations are not bringing more coverage in newspapers (my study excludes magazines and electronic media). Articles about charity that mention celebrity peaked in the early to mid-2000s and have since declined, according to information extracted from Lexus Nexus, a database that logs every article published in UK newspapers (see graph below). Celebrity is more likely to be mentioned in articles about charity than in articles on most other topics, but this is no longer a growth industry. In fact, it is declining: recent research on the use of celebrity in the US suggests that even the highest-profile figures can fail to get the causes they advocate prominently reported. 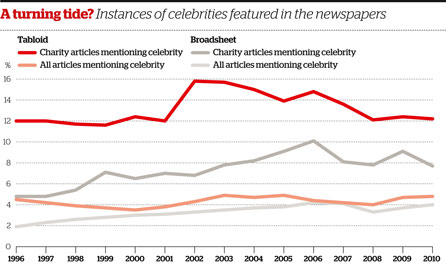 The third surprise is that the prominence of celebrity culture is out of proportion to its effects on most people. We cannot infer that its presence in the media results in a significant impact on most of the population in their day-to-day lives. Articles mentioning celebrity constitute a minority of news coverage. Analyses of large-scale surveys of media consumption suggest that the culture of celebrity forms an important part of the media use of less than 15 per cent of the population, and reaches mainly young women with little interest in current affairs. This emerges strongly in Celebrity Culture and Public Connection: Bridge or Chasm?, an article in the International Journal of Cultural Studies in 2007. It often feels as if we cannot get away from celebrity culture as it floods our free newspapers and advertising, but our interactions with it are not always intimate or particularly engaged. It is populist in appeal, but not very popular. US research suggests that web-based 'narrowcasting' may be much more effective than mainstream broadcasting in attracting attention to a particular celebrity.

So what might keep the culture of celebrity so prominent? One possibility is that it is, in fact, the vigorous interest of elites in the media, politics, other celebrity circles and especially the corporate world that keeps celebrity prominent in the media. And it is that interest that is partly responsible for the prominence of celebrities in the life of some charities and makes the work of celebrity liaison particularly challenging. With limited news space, varied public response, constant eagerness by the elite to meet celebrities, and constraints on the amount of (almost always free) time that celebrities can give to charities, much of what celebrity liaison officers do is about making the most judicious use of the limited access they can get. The work of celebrity liaison is one of constant relationship management - juggling competing demands for access to talent.

This can mean discouraging some work with celebrity. Some of the pressure to work with celebrity comes from within charities from staff who do not understand the practicalities of celebrity work or do not realise that you cannot just add celebrity to make a campaign work. "Half of my job is about managing the expectations of my colleagues," as one of my interviewees said.

The other form of pressure comes from corporates that are courted by charities for their support and in turn are hungry for access to talent. One typical remark from interviewees was: "A lot of the corporates obviously see charities as a way to get free talent." Corporates seek access to celebrity either for publicity, their brand associations or simply the pleasure of their presence at functions. They can exert strong pressure on charities to provide talent, and cases were mentioned to me in which charities had to buy in temporary talent from agencies to satisfy corporate partners.

These findings tie in with one of the more significant critiques of the work of celebrity and charities to emerge in recent years: Finding Frames, a study instigated by Oxfam and published by Andrew Darnton and Martin Kirk earlier this year. They argue that campaigning by charities brings the risk of promoting individualistic and consumerist values at the expense of collective action and citizen engagement. They extend this critique to the work of celebrities with charities. They do not decry it completely - their call is to rethink when, how and why charities should work with celebrities, rather than eschew it altogether; but it is clear that they are, with good reason, suspicious of the long-term values it will promote.

One surprising implication of my own and other research is that rethinking the association with celebrity may in fact require a deeper engagement with the celebrity industry, given that work with the industry requires constant negotiation, under unusual pressures from within and without the charity world. Emerging from that negotiation with outcomes that charities want will probably require a more thorough understanding of the circumstances in which celebrity interactions with charities are produced and communicated.

Dan Brockington is a reader at the University of Manchester. He is researching the interactions between celebrity and international development on a fellowship funded by the Economic and Social Research Council and has interviewed more than 90 charity staff, journalists and celebrity industry professionals, all on the condition of anonymity. More details about this research are available at www.celebrityanddevelopment.wordpress.com

Read the reaction from charities