Analysis: Charity funding is at the crossroads, says Chris Harris

It is difficult to miss the signs of the economic times – the media reminds us constantly how difficult things are. My own favourite indicators, the boarded up shop index (there are more per high street) and the cranes index (there are fewer per town) are flickering from amber to red. More personally, I know a number of people who have been made redundant in the past 12 months and, while some have welcomed the opportunity for change, others are finding that jobs are hard to come by.

A year ago we were being told that the downturn was coming but there was little change on the ground. Now the Labour Force Survey has shown a 5 per cent reduction in sector employment and the value of public sector funding, which has been the great engine of growth in the sector, appears to be faltering.

Clients of my firm, MacIntyre Hudson, are feeling the pinch. The use of prime contractors squeezes out the smaller more locally based providers, and while there have been valiant attempts to remind commissioners to look beyond price, they appear powerless to resist the pressure they are under to find 20 per cent cuts.

If we take a look back over the past decade, while there have been some ups and downs, generally the trend has been one of growth. Figures provided by the Charity Commission show that while the number of charities peaked at 169,300 in 2007, the annual gross income more than doubled over the decade to reach £56bn in June 2011. See Figure 1 below: 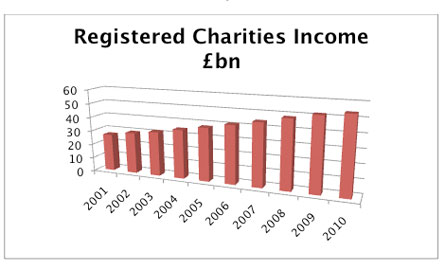 Over this period, the number of large charities (those with annual incomes in excess of £10m) more than doubled from 372 to 883, and their rate of growth was higher than the average for the sector. As a result, their share of sector income rose from 43 per cent in 2001 to 56 per cent in 2010.

The headline rate of growth has slowed for the sector in recent years and, more importantly, when inflation is taken into account the real growth rate turned negative in 2010. This can be seen in Figure 2 below: 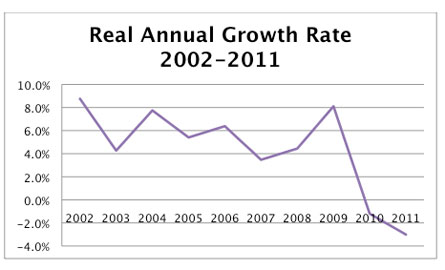 We expect that this new reality is going to be around for a while. Other countries that have experienced a banking bubble, such as Sweden, have taken a decade or more to recover, so while predicting the future can be difficult, it is safe to assume that the UK will have the same challenges for some time to come. This is not to say that there will be no money around, but life is likely to get more competitive and difficult as charities respond to relative scarcity. This will mean rather more hard decisions that affect people’s lives. Restructuring will be a recurring theme and many charities will find they can no longer provide services to so many clients. They may also have to face the prospect of reducing the quality of what they do provide. None of this is very palatable and some managers may feel ill equipped for the change. Most of us find it easier to say yes rather than no to those in need.

When the going gets tough

So the new reality is here and we are going to have to get used to it. Difficult times can focus the mind on what really matters and there is a place for those charities that respond to the real needs that recession throws up. For example, food banks are already seeing a significant increase in demand for their services. The Institute of Fiscal Studies has now confirmed that the government funding cuts do make the poorest poorer and this will affect advice and guidance centres as entitlements for their clients become eroded.

Charity finance managers need to help their colleagues and trustees to make the difficult decisions in ways that maximise the use of the charity's resources. A financial effectiveness review that looks at each area of operation and asks the difficult questions about whether your charity is the best organisation for the job, should be combined with benchmarking and a sound use of quality standards for the fundraising, back-office and management functions.