Charities’ income fell in 2009/10 after growing in the previous four years, according to this year’s Charity Market Monitor, an annual survey by CaritasData of the most recent accounts of the top 500 charities by fundraising income.

Over the past five financial years, it says, the country’s largest fundraising charities have seen "a robust rise and then a marked fall" in income levels, and ended the period with income only 1.5 per cent higher than at the start.

The report’s longitudinal analysis covers only 446 of the top 500 because the rest do not have consistent five-year data. But this sample accounts for about 20 per cent of the combined income of all charities, and is regarded as "highly representative of the main trends in finance", according to the CMM’s author, Cathy Pharoah.

The analysis, in which all figures are adjusted for inflation, shows that most income streams did not dip until well after the economy as a whole. "The various streams to the major charities were subject to different influences, and were not all affected by economic turbulence at the same rate or in the same way," the report says. "This explains the initial relative resilience of income growth after the recession had begun to hit the wider economy in 2007/08."

The best performing stream was gifts in kind, including donations to charity shops, which rose by 18 per cent a year. The worst was investment income, which fell by 5.5 per cent a year.

"The evidence presented here shows the roller-coaster impact of economic turbulence on the major charities’ income," the report says. "The expansion seen in the middle of the decade fuelled perceptions that the charity sector was a potential growth area, and attracted interest from a new range of more socially oriented investors.

"The evidence would suggest that the value of the major fundraising charities today is only slightly greater overall than it was five years ago. The immediate challenge for many will be recovery before they begin to think about new growth."

"The main thing I expect we will see in the next Charity Market Monitor is the impact of government cuts. I would expect to see a slight shift in the balance between philanthropy and statutory funding as the sharp cuts in government expenditure come through. 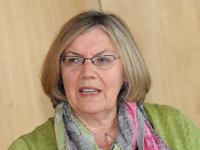 I think we might see some types of fundraising income stabilising or lifting a little, after the falls of the past couple of years, but I wouldn’t be surprised to see an overall drop in the value of donations. We’ve pulled out of a recession, but the economy isn’t robust, so I wouldn’t expect to see big rises. There’s a very strong link between individual giving and the state of the economy, as you would expect, so we might see a smaller sector for another year.

However, charities are adjusting to the changes. They’re recruiting fundraisers or adopting different strategies. Some of the biggest charities are looking at new ways of earning income. Charities are getting more entrepreneurial.

I expect legacy giving to hold up, because the value of legacies is strongly tied to the market. In the long term, people will be dying older, and there are worries about the cost of care eating up legacies – but that’s likely to affect the value of legacies much less than movements in the values of house prices and shares. We will start to see legacies from the baby-boomer generation, and this could change people’s giving habits. These people support different types of charitable causes – arts, international development and the environment, for example.

There might also be an uplift in foundation giving, because they will have more money. Since the publication of their 2009/10 accounts, the value of foundations’ investment assets has risen by 20 per cent. However, one thing that’s come out in other research I did is that foundations rely much more on voluntary giving from major donors than we realised. Grant-making from foundations hasn’t grown this year – that’s quite a good indicator that major donors are giving a bit less."

Legacies grew while all around them fell; donations of goods were up; animal and armed forces charities did well – others did not; and Cancer Research UK still brings in the most money

Most sources of fundraising income fell in the year to 2009/10, but legacies bucked the trend and rose by about 1.4 per cent in real terms. Charity Market Monitor attributes the increase to rises in the value of property and shares, which make up the majority of most legacy gifts, rather than a significant change in people’s legacy giving habits.

Legacy income by charity varied widely: Oxfam’s was up by a quarter; Save the Children’s was down by a similar percentage. But individual donations, which made up a third of total fundraising income, fell by 2 per cent.

Grant funding from trusts and foundations also fell by 1.7 per cent, after many years of rising. CMM says that the income of foundations fell by more than 10 per cent, although that will largely have been reversed in the next set of accounts.

Cancer Research UK was the most effective fundraiser in several areas, including legacies, events, appeals, corporate donations and community fundraising.

Overall fundraising income fell, but causes fared very differently in 2009/10. Risers included animal charities, which were up by 4.4 per cent, and armed forces charities, up by 6.2 per cent. Other risers included hospices, hospitals and chest and heart charities.

Arts and culture charities were down 24.8 per cent, but mostly because the Tate galleries received some large gifts the year before. Charities for older and younger people also saw a fall in their share of income.

The largest cause was health, which attracted more than a quarter of fundraising income – and cancer charities accounted for almost half of that. Other major causes included religion and international, which attracted about 20 per cent and 15 per cent of donations respectively.

The report found major differences in the percentage of total income made up of private donations. Chest and heart charities received 90.8 per cent of their income from such sources; religious, animal, hospital and cancer charities received more than two-thirds of their income this way. Charities for special needs, arts and care of the elderly got less than a fifth of donations from private sources, with disability charities last on 17.6 per cent.