The country's 1,204 masonic charities are likely to be affected by the impending charity tribunal case on benevolent associations because they frequently have as one of their objects "the relief of poor and distressed brother masons" and their families. This is clearly a restricted group and the question will be whether such charities provide adequate public benefit.

But many of them also have an additional object of funding other charities, and Nigel Brown, grand secretary of the United Grand Lodge of England, says that is what most masonic charities do. "It would be very unusual for a local charity to make a grant directly to a brother mason," he says. "In my experience, that's never happened."

The support of masons for other masons who are in hardship, says Brown, is given through four large masonic charities, donors to which include both individual masons and the many local masonic charities. The total spending on charitable purposes of the big four, as shown in their latest accounts lodged with the Charity Commission, comes to nearly £65m.

The first, the Freemasons' Grand Charity, receives regular donations from almost every mason in the country and makes grants both to masons in poverty and to other good causes, such as hospices. It spent £16.7m on charitable purposes in the year to 30 November 2009, according to accounts lodged with the commission.

Most of the beneficiaries of these four charities are likely to be masons or their families, but Brown contends that this is not an "unreasonably restrictive" group because it includes at least half a million people and that masons are therefore acting for the public benefit when they support one another.

As the umbrella body for the local lodges and the 250,000 masons in the UK, the United Grand Lodge has been invited to submit evidence to the tribunal. Brown says he is looking forward to a chance to tell the world more about masonic charity. Masons, Brown says, still suffer from the perception that they are a secretive group interested only in helping one another, whereas in fact lodges give generously to many other causes.

He says there is such a large number of masonic charities because the country has 8,000 lodges. These are loose affiliations of masons who meet up regularly, Brown says, primarily to sit down together "in friendship, equality and humanity", and only secondarily to fundraise. Most have fewer than 100 members, he says, and many, though not all, have their own charities attached.

Lodges have a simple model for charitable giving, Brown says. All donations come from members and lodges do not fundraise in the wider community. Each member donates whatever he chooses, then the lodge directs it to charitable causes, either through a small committee or a vote by members.

"We don't know exactly how much masons give in total, but we believe it's many millions," Brown says. "Thousands of charities in this country have received support from masons."

Penny Chapman, head of charities at Bircham Dyson Bell, a law firm that has advised several clients affected by the Attorney-General's reference of benevolent funds to the tribunal, says Brown's argument about masons not forming an "unduly restrictive" group has merit, but will be tested by the tribunal.

"We're told that to be charitable you must have a big enough class of beneficiaries," she says. "But no one has ever put down hard-and-fast rules about what 'big enough' might actually be. Limiting benefit to members of a single organisation might be seen as restrictive, but there are some very large organisations out there. The masons can argue that their members are a very large class indeed."

'WE'RE PRETTY TYPICAL' - ON THE LEVEL IN SHROPSHIRE

Jeremy Lund, a representative of the Shropshire Provincial Lodge, the central body for the 33 lodges and 1,400 masons in the county, says some of the most popular choices for donations by local masons are the air ambulance, hospices and national disaster relief charities - most often the British Red Cross.

The masons also contribute to a programme that gives teddy bears to hospitals to comfort ill children. Donations usually run into tens of thousands of pounds a year, he says. 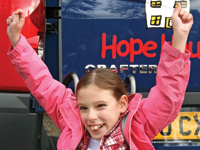 "We're pretty typical of masonic charities," he says. "You will find a similar structure in most of England."

He says the Shropshire masonic organisations, like their counterparts throughout the UK, contribute to the four large masonic charities: the Freemasons' Grand Charity, the Royal Masonic Trust for Girls and Boys, the Royal Masonic Benevolent Institution and the Masonic Samaritan Fund.

"In 2008, we gave £1.6m to one of the four major charities, but that happens relatively infrequently," Lund says. "That was the result of a big campaign over several years."

He is a member of two lodges: the Salopian Lodge of Charity 117 and the Sabrina Lodge 4158. In each, a small committee decides on the lodge's fundraising objectives and members donate to support those causes.