Analysis: Charity Pulse survey - morale is up from an all-time low

This year's Charity Pulse survey shows a slight improvement in job satisfaction among voluntary sector workers. Andy Hillier reports on the overall results - and on the much bigger improvement among fundraisers

After a tough 2012, when job satisfaction among charity staff sank to an all-time low, the annual Charity Pulse survey by Third Sector and Birdsong Charity Consulting shows some glimmers of improving morale in the sector.

Three key percentages stay the same as in 2012: those saying that they would recommend their charities as places to work (56 per cent), that their management is effective (47 per cent) and that they are treated with fairness and respect (67 per cent). Two measures are down: "I receive sufficient training" (down three percentage points) and "I get support to do my job well" (down two points).

Frances Hurst, co-founder of Birdsong, says it hoped for greater job satisfaction. "We've seen very little uplift," she says. "The results seem to show that smaller charities are becoming more attractive - those in smaller organisations are in closer relationships with their leaders and seem to view them in a more positive light.

"Redundancies seem to be easing off compared with the past three years. There has also been a significant uplift in internal communication. Misinformation makes things worse in uncertain times, so it's good that more people feel they're being kept in the loop."

Here are some of the findings in six key areas:

Pay Staff are happier about their levels of pay, with 50 per cent overall saying their salaries are competitive - seven percentage points higher than in 2012. For segmented figures, see chart 5.

Morale Only 31 per cent agree that morale is high - two percentage points higher than in 2012 and 18 points down on 2008. Seventy-one per cent say they are proud to work at their charities - the lowest since the survey started in 2007.

Best employers Only 56 per cent overall would recommend their charities as employers - the same as last year but significantly down on previous years, when about 70 per cent was the norm. Those in large charities are least likely to recommend (see chart 2).

Leadership and communication Fifty-one per cent overall say they feel safe to challenge the way things are done, five percentage points up on last year. Those in small charities feel the most comfortable, those in large ones least so (see chart 3). But only 47 per cent of respondents consider their management effective, the same proportion as last year.

Sixty-six per cent say they feel well informed about changes happening in their charities, compared with 59 per cent in 2012.

- Charity Pulse ran between March and April 2013, asking 46 questions. There were 675 respondents from more than 190 organisations. Further details are at bird-song.co.uk.

* Next week: healthy and unhealthy working relationships in charities

Fundraisers are the most cheerful

Job satisfaction might have improved little across the sector as a whole in 2013, according to the Charity Pulse survey, but it has gone up significantly among fundraisers.

Sixty-five per cent of fundraisers say they are satisfied with their jobs, up from 55 per cent last year; last year, only 24 per cent felt that morale was high in their organisations, but the figure is 39 per cent this year. 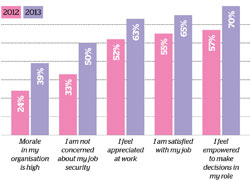 undraisers also feel more valued. Sixty-three per cent say they feel appreciated, compared with 52 per cent in 2012. Seventy per cent agree they feel empowered by their managers, which is 13 percentage points higher than last year.

Fifty-five per cent of fundraisers say they get useful feedback from their managers - up from 49 per cent last year - and 55 per cent say they feel safe challenging decisions, compared with 43 per cent in 2012.

Last year there was a big dip, but this year we've seen an uplift. Charity income is still under pressure, but this is helping fundraisers to feel like highly valued members of staff.

"The way that fundraisers are being led is helping them to feel happier and more valued. They are also feeling safer to challenge the way things are done," says Hurst.

Fundraisers also feel more confident about their job security, with 50 per cent saying they feel secure, compared with 33 per cent in 2012.

Fundraisers are happier with their pay - 54 per cent of respondents say their pay is competitive, compared with 46 per cent last year.

The study was based on responses from 342 fundraisers to this year's Charity Pulse survey.