This year's Charity Pulse survey has uncovered 'astonishing' data on unhealthy working relationships in charities, including the effect that they can have on staff turnover, productivity and job satisfaction. Stephen Cook reports

This year's Charity Pulse survey attempted to gather information on an aspect of working life in charities that is relatively under-researched and hard to pin down - working relationships and the effect they have on people's performance.

Birdsong Charity Consulting, which conducts the survey annually with Third Sector, asked a small number of specific questions on the subject and segmented responses to all its other questions between those who think relationships in their charity are healthy and those who think they are unhealthy.

The results are a surprise to Frances Hurst of Birdsong, who has worked in the area for more than a decade. "We were astonished to discover the level of impact that unhealthy working relationships are having in charities," she says. 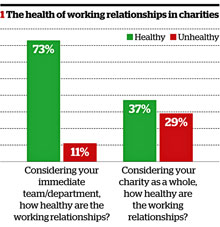 The report says (chart 1 right) that nearly three-quarters of respondents consider working relationships to be healthy in their immediate teams, but the figure slips to just over a third in relation to their charities as whole. The proportion considering charity-wide relationships as unhealthy is almost as high, at 29 per cent.

The disparity is not unusual, says Hurst. "In their immediate department people have more control, but when the issue is between your team and other departments, leadership and senior management are held responsible."

Once it's clear that nearly a third say overall relationships at their charities are unhealthy, it's hardly surprising that few of that group are satisfied with their jobs, think it is safe to challenge the way things are done or plan to be working for the same charity in a year's time (charts 2 and 4 below). 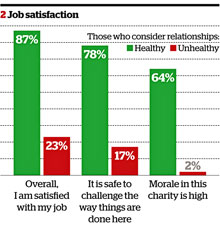 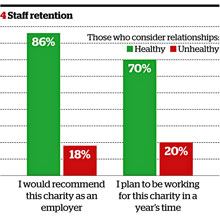 Nor is it surprising that all respondents generally think unhealthy relationships have an emotional impact and drain resources (chart 3 below). 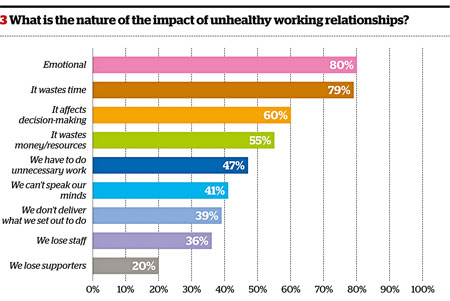 What is more surprising, however, is the sheer range and extent of those dissatisfactions and effects, which seem to overwhelm compensating factors such as passion for the cause. Hurst says the impact of unhealthy relationships is comparable to that of being bullied - something many would consider far more serious.

"Over the years we've come to see healthiness as nice to have, but not something that would prevent people just getting on with things if it's not there," she says. "This survey shows that the impact is far more significant: there are powerful links with people leaving, time wasted, decision-making being delayed." 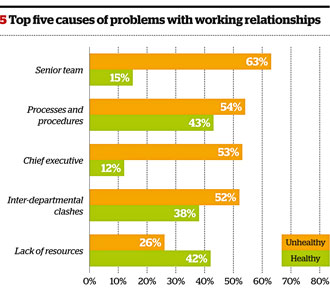 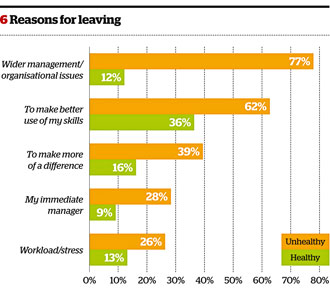 Factors such as these lead Hurst to conclude that the nature of leadership and management determines whether working relationships are likely to be healthy, and that action needs to come from the top. "Leaders need to be taking this more seriously because it's not just about dissatisfaction," she says. "It also has an impact on effectiveness.

"Some leaders are naturally aware of this and think it's important, while others are mainly task-driven and consider the strategy the most important thing," says Hurst. "But, as the management consultant Peter Drucker said, 'culture eats strategy for breakfast'. You can have the best strategy in the world, but if you're at each other's throats, you're never going to deliver.

"Management is still a dirty word in parts of the sector - it's considered to be navel-gazing and is pooh-poohed on the grounds that we should be spending money and time on world hunger or whatever our cause is. So some are trying to do good in the world but alienating half of their staff. We go on about human rights and respect and diversity, but it's often a case of 'charity, heal thyself'."

Hurst thinks that one reason senior managers fail to act on unhealthy relationships is the shortage of published data about the problem and how to address it, in any sector. "Innovative private-sector companies are moving away from traditional hierarchical management," she says. "The voluntary sector, by and large, has not gone down that road. It has rather dated organisational structures, often with a pyramid system with too many decisions made by a few people and too few by everyone else.

"So there's a small number of people rushing round covering vast areas and the rest sitting around who would love to be asked to help. We're often stuck in a dated way of working, and young people who come in and are open and eager to do stuff often find an old-fashioned enterprise that is very constricted in how it does things. It's a shame and it's unnecessary."

- Charity Pulse ran between March and April, asking 46 questions that received replies from 675 respondents in more than 190 organisations. Further details at bird-song.co.uk.