Analysis: Is charity retail bad for the high street?

The increasing number of charity shops in the UK's shopping areas contrasts with the slump in other retail. Jenna Pudelek visits Rochdale to see what's happening on the ground

It's the lunchtime rush in Rochdale and Dorothy Howarth is sitting outside a cafe in the sunshine enjoying a cigarette and a cup of coffee in Yorkshire Street, the main pedestrianised shopping area in this north-west market town.

She can see three charity shops from where she's sitting and says she likes buying second-hand books from them. "People with big families and those on benefits find them useful, and there are a lot of people on benefits in Rochdale," she says. 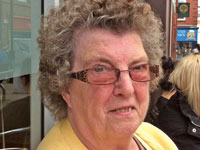 But Howarth (right), aged 76, remembers when it was different: "It used to be nice here - there were independent shops. Recently, shops like Dorothy Perkins and Burton have all shut down as well, with charity shops in their places."

There are in fact eight charity shops in Yorkshire Street, which is about 100 metres long. A Mind sits two down from a Scope, which is opposite a British Heart Foundation furniture and electrical store. There is another BHF selling clothes, an RSPCA, a YMCA, a Barnardo's and a Cancer Research UK. Many other shops are payday loan companies, pawnbrokers and pound shops. Even the pleasant weather cannot disguise a somewhat down-at-heel look.

As the birthplace of the cooperative movement in 1844, Rochdale has a long history of ethical shopping and social businesses. But the concentration of charity shops has become a significant issue in recent years, and concerned traders have got the local Labour MP, Simon Danczuk, involved.

"I strongly believe councils should have powers to determine where charity shops are located," says Danczuk. "We all want to see more diverse high streets, and it's about getting the balance right."

Julian Dobson, a writer and director of the think tank Urban Pollinators, who specialises in regeneration, mentioned Rochdale in a recent blog about charity shops. "It's the visual sign of a place and whole sections of society that have been pushed to the margins," he wrote.

Dobson says the problem is not individual charity shops, but a concentration of them to the exclusion of other businesses and opportunities to set up other businesses. "You end up with high streets that have a feel that is not only downmarket but also lacks vitality and interest," he tells Third Sector.

The lunchtime shoppers are proud of Rochdale and do not want it to be portrayed negatively. They say they like charity shops, but admit the town has too many. Martin, who is unemployed and doesn't want to give his surname, puts it most bluntly: "It's a pound town. That's what Rochdale has become. Ten years ago it was a proper shopping place."

Paul Turner-Mitchell, director of the 25Ten Boutique in Yorkshire Street, says Rochdale has double the national average of charity shops in its high street and believes the high concentration is affecting investment, growth and confidence.

He thinks start-up businesses should enjoy the same 80 per cent rate relief as charity shops. "It is not about being anti-charity: it is about creating sustainable town centres," he says.

Turner-Mitchell says Rochdale experienced a big increase in shop vacancies in 2009 at the start of the recession. "What we don't have in the town now are big-name retailers," he says. "Woolworths shut, which was a national problem, but it was like a domino effect and all the major brands went at that time."

Marjorie Thompson, owner and manager of Chantilly, a lingerie and swimwear store situated just off Yorkshire Street, says the large number of charity shops has not affected her business, but thinks it unfair that they receive the 80 per cent business rate relief.

Most charity shop managers in Yorkshire Street refuse to discuss the issues raised by shoppers and shop owners and refer Third Sector to their head offices, which decline to discuss local concerns and offer statements about being "passionate about our role in the local community", having "brilliant volunteers" or being "incredibly proud" of the role of their shops. 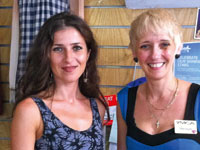 But Janine McGuinness, manager of the YMCA shop, is happy to talk. "There are plenty of empty units," says McGuinness (right, with Olivia Freeman, assistant manager). "We are just stopping another one being empty. There are plenty of business opportunities - it is just that no one wants to take them. The difficulty in Rochdale is that people can't afford a lot."

Meanwhile, retailers in the town have been working to turn around its fortunes and bring new business to the area. Turner-Michell has sublet the floor above his shop to create the Rochdale Emporium, a space for start-up businesses including a cafe, a photographer and a baby clothes shop.

"My hope is that the start-ups will fly the nest and go on to take over an empty shop in town," he says.

Charity retail is booming, with more shops opening year on year and income likely to soar above £1bn in 2012/13. The British Heart Foundation now has more than 700 stores, and Cancer Research UK has 553.

The Charity Retail Association says the total number of shops run by its 350 members grew by 2 per cent to more than 7,000 in the year to March, and their income rose by 4 per cent to 974m, from £940m the previous year. The CRA estimates that it represents 80 per cent of the UK's charity shops.

The growth of charity retail and the problems faced by other retailers have led some commentators to question the 80 per cent relief charity shops enjoy on business rates. The shopping expert Mary Portas, who carried out a government review of the future of the high street, proposed at one point that there should be a limit on the number of charity shops allowed to claim the relief.

After protest from charities, however, her final report said instead that local authorities should be able to give business rate concessions to new businesses as well. "The business rate discount that charity shops enjoy builds a disadvantage into the system that is causing a problem," the report said. "There will be no growth and innovation now or in the future if we don't address this."

Richard Dodd of the British Retail Consortium says business rates are one of the main reasons why shops get into trouble, contributing to the UK's town centre shop vacancy rate of 11.4 per cent. "We need a predictable and affordable business rates system," he says. "It is not about marking out one particular sector or trying to produce divisions." 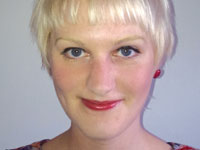 Wendy Mitchell (right), head of policy and public affairs at the CRA, says rate relief is essential to charities' ability to raise £220m a year for a huge range of services. The problems of other retailers are caused by poor consumer confidence and changes to the way people shop, such as out-of-town shopping and the internet, she says: "These problems have nothing to do with charity shops."

Gareth Morgan, general manager for retail in the south of the UK for the British Red Cross, says many landlords would be in serious trouble without rental income from charity shops. "We invest at least £25,000 to £30,000 every time we open a shop to fit it out to a high standard, and we have a strong covenant, which gives the landlord and the high street some assurance of steady occupation," he says.

Mike Taylor, retail director at the British Heart Foundation, says its shops often bring life back to high streets by opening on previously derelict sites. "Without rate relief, we wouldn't be able to continue the life-saving work that we do in the area," he says.

And Simon Ledsham, trading director at Cancer Research UK, which has just opened a new shop in London's Portobello Road, says it considers locations carefully. "We would not open a new shop where there is already a high concentration of other charity shops," he says. "But it is also fair to say that if they are long-running and successful, they must be trading well and have enough customers to bring in donations and purchase items."