Analysis: Community organisers - How we set up a local town team

Andy Hillier revisits a team of community organisers in Bristol, 15 months after they began training, to report on progress of the project, part of a nationwide Cabinet Office initiative

- This article has been clarified; please see final paragraph

Lou Wild freely admits she wasn't always the most community-spirited of businesspeople. She is manager of Pins N Needles, a tattoo shop in Lawrence Hill, Bristol, and until last year she had never really thought about doing anything to help her community. 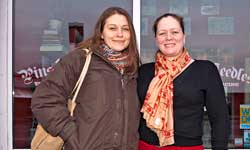 That changed one day last summer when Rebecca Cant (pictured right with Wild), the community organiser for the area, visited the shop and started asking her what improvements she'd like to see in the locality. Less than a year later, Wild is setting up a 'town team' of Lawrence Hill businesses that is trying to smarten up the run-down high street.

"Rebecca kind of inspired me," says Wild. "I was getting more and more grumpy about the state of the place, but talking to her made me realise I could do something to improve it."

Wild is also trying to organise a community dog show. Lawrence Hill is home to one of the biggest Somali communities in the UK, but many Somalis fear the popular pet. "I've seen Somalis literally run away screaming when they've seen a dog," she says. "I want to make them aware of why we Brits love dogs. I also want to use the event to bring the different communities together so they can talk more."

Cant's work is part of a Cabinet Office plan to train 500 full-time and 4,500 part-time voluntary community organisers and have them working in some of the most deprived parts of England by March 2015. Their role will be to encourage people to tackle local problems by setting up action groups and organising events.

Third Sector first visited Cant and three other community organisers when they began their training at the Barton Hill Settlement, a community organisation in east Bristol, in November 2011. Now, only Cant and Steve Crozier, who works part time, remain (see profiles, below). Richard Parkes completed the programme last year but is still looking for a job after the Barton Hill Settlement decided it could afford to appoint only one full-time organiser; Leo Singer left the training programme last year to take a job with the NHS.

Despite the reduction in headcount, there are signs of steady progress. Cant cites the example of a mother from a nearby tower block who wrote to Bristol City Council after it threatened to close a popular sports and activities programme used by her teenage sons. The woman had literacy problems but, with Cant's help, wrote the letter and gathered signatures from concerned parents and young people. The council relented and provided an additional six months of funding for the programme. "Writing that one letter made her feel that she could make a difference - it was a very empowering moment for her," says Cant.

She also encouraged a young mother who described the area as a "dead end" to put on a music and cultural show last year. The woman is now looking into the possibility of setting up a much bigger festival in the area.

Crozier, meanwhile, is working with residents of a tower block who want to make more use of their community room. He found out about the common desire to do something while knocking on doors in the block, and encouraged residents to hold a meeting to discuss their plans. "A lot of what we're doing is building a web of relationships," he says. "We're bringing people together who might live close together, but don't know each other."

He has also helped to instigate litter picks and is supporting a group of residents who live in a block of flats as they formulate a plan to improve a dilapidated play area.

Perhaps one of the organisers' most notable successes of the past year was helping to set up a question-and-answer session with residents who were concerned about welfare reforms. The issue of losing benefits was consistently raised in day-to-day discussions, so the organisers encouraged one of the more vocal residents to hold an event with the help of a local advice centre, with the aim of explaining the changes in simple terms.

Sarah Dailly, a manager of the Barton Hill Settlement, says: "The event was really good. It was held at different times of the day to make it accessible. The council also sent along a representative, which at that point was unusual, because it hadn't spoken to residents directly about the reforms."

But getting residents to take action has required time and effort. Cant estimates that she has listened in depth to about 500 local people over the past year, while Crozier has done the same with about 260 people. Most residents openly share their concerns and visions for an area with the organisers, but few are willing to do anything about it.

Cant says: "At first I thought that everyone was willing to take action, but then you realise that not everyone is ready."

Dailly says that, as with most forms of community work, it can be demoralising at times because it can be slow to get going. Even when residents do look as if they're going to take action, they can change their minds and there's little community organisers can do about it.

"You get to the point where residents are expected to start doing things themselves and it's then that things can get a bit wobbly," she says.

But Dailly believes that having community organisers spend most of their time listening to people in the street or their homes is refreshingly different from much community development work - which, she says, "largely involves sitting in an office".

As a result, the organisers have been able to reach out to some of the more isolated residents in the community and those who don't generally engage in local activities. "I've been here for 11 years and know a lot of people in the area," says Dailly. "But the organisers are bringing in people I don't know."

The community organiser in Easton, Bristol, came up with a league table of concerns based on conversations with residents 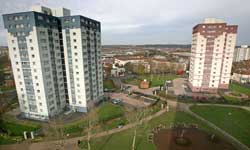 IS IT JUST A TRAINING PROGRAMME? 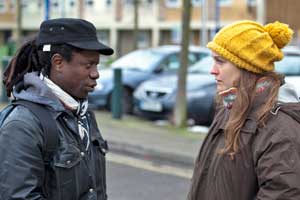 The government first said it would invest £15m in the programme, but last autumn agreed to provide an additional £7.5m in progression grants after it became apparent that many senior organisers would struggle to find employment without support. Locality, the community development body that is managing the programme on behalf of the Cabinet Office, announced last autumn that it was setting up a separate organisation called CoCo to help community organisers find longer-term funding. Jess Steele, innovation director at Locality, says 77 people have completed the senior community organiser programme, of which 60 per cent have so far found jobs in related roles. She says: "There has been a lot of interest in employing community organisers in the voluntary sector and in fields such as the NHS."

Community organisers have had some notable successes, says Steele, but the programme is less about "big wins" than forming stronger communities.

Neil Jameson, executive director of Citizens UK, an alliance of community organising groups that bid unsuccessfully to run the government programme, doubts it will be successful in the long term. "The government tender wasn't worth as much as expected," he says. "This has led to community organisers being given living-wage posts and short-term contracts in the hope that they will get jobs in the long term."

He believes that community organising must use local people and pay them properly. "In my opinion, the community organisers model just isn't sustainable," says Jameson. "It's nothing more than a training programme."

But Steele says many of those who have completed the training are now going on to secure jobs paying about £20,000 a year.

Lou Wild, manager of Pins N Needles, would like to make it clear that she has been involved in other community activities and fundraising events before she met the community organiser for Barton Hill, Bristol.