Analysis: Counting the cost of reform at Samaritans

Samaritans is thriving under chief executive Catherine Johnstone, but progress has been painful, with claims that restructures, payoffs and salary rises for senior staff have created a 'them and us culture'. Stephen Cook reports

In January 2009 Samaritans announced that its chief executive, Dominic Rudd, a former Royal Marines officer, was leaving immediately for personal reasons after less than two years in the job. No further explanation was offered, and the charity's accounts later indicated that he departed with a payment approaching his £90,000 annual salary.

Rudd, now a mountain training instructor, had taken over from David King, who had spent two years implementing a radical reorganisation to bring the number of the charity's trustees down from 235 to 15. It was an unsettled period: annual staff turnover was 33 per cent, and Rudd's sudden departure left the impression all was not well.

Four years later, the charity appears to be on the crest of a wave. Under its current chief executive, Catherine Johnstone, it has increased its fundraised income by 38 per cent, expanded its pool of volunteers, run some inspiring campaigns and won nine awards, including a Third Sector Excellence Award for its partnership with Network Rail to reduce suicide on the railways. Calls to its helpline have increased by 6 per cent. 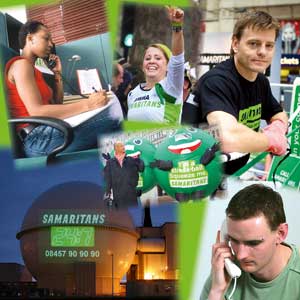 Johnstone, who has worked in the sector for nearly 20 years, was interim chief executive of the government agency Capacitybuilders for nine months before she came to Samaritans, which has a 'central charity' and 201 branches relying on 20,650 volunteers. "It has always been a high-profile brand, but has not operated to its full potential," she says. "We've had a very aggressive change-management process. Samaritans is growing and is much more proactive now. We want to reach more people."

The changes have not been painless, however. Three departments have been restructured, and a fifth of the 100 staff at the central charity have either been made redundant or left under confidential compromise agreements. One employee wrote to Third Sector in January, claiming to have the support of a wider group of current and former staff and volunteers, to say that the trustees had ignored their concerns about "a cavalier expenditure of donors' money".

The main complaints are that an inordinate amount of work has been given to one consultant, that the restructures have been driven by personality clashes rather than business needs and that the salaries of the directors and the chief executive have risen by disproportionate amounts. The letter says these examples constitute "irresponsible expenditure of donors' money at best, or gross incompetence of the executive team at worst". It adds that a "destructive them-and-us culture" is developing.

Johnstone says the complaints come as "a bit of a shock", not least because the two most recent staff surveys put Samaritans in the top quartile of charities for staff satisfaction. "I'm a very accessible chief executive, and there's little that staff don't feel able to express," she says. "Usually any concerns come back to me - it's not the norm for it to happen like this. If there are a few disgruntled staff, it's not what I would want, but we have had a big change programme." She adds that the person who wrote the letter to Third Sector has been identified, but no disciplinary action is being taken.

The letter complains that one consultant was a personal friend of Johnstone and was paid between £200,000 and £250,000 for work over the past three years. "We consider this excessive," it says. "If capacity or lack of skills was an issue, recruiting extra resources would have been a better option, which would have brought in extra support at a fraction of the cost."

Johnstone says the consultant is Carole Claridge of C2 Consulting, with whom she had worked on one previous occasion before she came to Samaritans. She says Claridge is not a personal friend of hers. Since 2009, C2 has been paid £167,000 - half of all consultancy expenditure over the period - for work on the corporate plan, two big telecommunications projects and several other small projects. Claridge was also interim operations director for seven months, bringing the total to about £200,000.

A statement by Samaritans says it sometimes uses consultants, some of them relatively regularly, and that hiring decisions are made by the chief executive and reported to the trustees: "It's not always cost-effective to bring in new staff. Samaritans is a complex federated organisation and there are often advantages to working with consultants who already have experience of the organisation."

The letter to Third Sector says Johnstone has made many improvements, but that "her biggest negative is managing staff. There is now a culture that if anyone puts a foot wrong or is disliked by the executive team, their time is limited and in most cases they end up leaving suddenly. We estimate that between £300,000 and £400,000 has been spent managing people out of the organisation via badly managed restructures and goodbye payments over the past three years."

A Samaritans statement says there have been restructures in the volunteering, fundraising and operations departments since Johnstone arrived, that 11 staff have been made redundant, at a cost of £140,500, and nine have left under compromise agreements, at a cost of £99,000. "These restructures were agreed by the board, had clear objectives and were always done to enable the organisation to have the right roles to deliver the corporate plan in a tight budget," it says.

Johnstone adds: "You have to move people around to respond to business needs. There are a few disgruntled middle managers who wanted to be director or head of team and didn't get those roles. It can be painful, because some people have been working in the organisation for a long time, but it's a case of getting the right people into the right roles."

The third concern raised in the letter is that the salaries of the chief executive and directors have risen substantially while other staff received 1 per cent in 2009, nothing in the following two years and 2 per cent in 2012. "We understand that at times senior management will receive higher increases than the rest of the staff, but the situation has passed what we would expect of careful expenditure of donors' money," it says.

Johnstone says that when she arrived, salaries were at the discretion of line managers and were out of line with similar roles across the organisation and in comparable charities. A company called Croner Reward was employed in 2010 to place each job in a market-benchmarked salary band, which resulted in 17 staff moving to a higher-paid band at a cost of £30,000 and everyone being paid 6 per cent below the market median. The number of directors was reduced by one, she says, and the remaining four received pay rises of between £4,526 and £9,114 in 2010, totalling £25,000. Last year, the trustees identified retention of senior staff as one of the strategic risks of the organisation and decided to bring the salaries of directors in line with the market rate instead of 6 per cent below. This resulted in further pay rises for directors, ranging from £3,353 to £4,100 and totalling £16,500.

Asked what evidence showed loss of senior staff to be a risk, a Samaritans spokeswoman says: "Loss of senior staff when you have a small staff team is always an organisational risk. I would assume this is a common risk for most charities."

Johnstone was initially employed as interim chief executive and did not apply when the job was advertised at £90,000. No appointment was made and she was invited to remain as interim, but decided, according to a Samaritans statement, "to apply for the permanent position as she felt that was in the best interests of the charity. She then went through the same interview process (including testing) as the first-round candidates, and was appointed in July 2009."

One sector HR expert, who does not wish to be named, says this appointment process would not be considered best practice, but is not "a hanging offence".

The letter of complaint argues Johnstone's salary is excessive for a charity with an income of £11m and would be more typical in a charity with an income of £100m. Johnstone points out that Samaritans is a complex federated organisation operating across three UK countries and the Republic of Ireland and that its "value" would be about £80m if the contribution of volunteers and other aspects were quantified.

The charity's statement concludes that it does not recognise the letter's reference to a "them and us" culture and says it has checks and balances to ensure stringent governance and financial management: "As an organisation that receives more than 95 per cent of its funding from public donations, we work hard to ensure those donations are spent in the most cost-effective way." 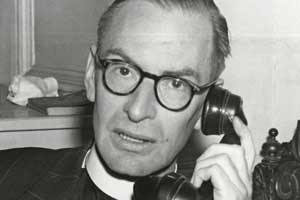 1. Samaritans was started in 1953 by Chad Varah (right), a vicar in south London, 18 years after the suicide of a 14-year-old girl awakened his interest in personal counselling

2. At first it was called "999 for the suicidal", but the Daily Mirror called it "Telephone Good Samaritans" and the name stuck

3. At first, callers got an appointment with Varah, but the service spread with the help of volunteers

4. There are Samaritans signs in and outside the telephone box at Beachy Head, the sea cliff in Sussex where an average of about 20 people a year commit suicide

5. In 2004, three years before he died, Varah said he was disillusioned because Samaritans had ceased to be an emergency service and now offered "emotional support"

6. In 2008 Samaritans drew up guidelines for the media on the responsible reporting of suicide, including 'copycat' risks

7. Someone contacts Samaritans every six seconds; one caller every 52 seconds mentions suicidal feelings

8. Samaritans is piloting a free-to-use number so that people don't need to worry about phone costs