Charities that work with offenders rely on public funding more than those in other cause areas and have been disproportionately affected by the cuts. Chloe Stothart and Stephen Cook report

Five weeks after the Coalition government came to power in 2010, the Justice Secretary, Kenneth Clarke, made a keynote speech in which he bemoaned the growth in the prison population, the rising rate of reoffending and the ineffectiveness of short sentences.

"We want a far more constructive approach," he declared. "The voluntary and private sectors will be crucial to our success. We want to make far better use of their enthusiasm and expertise to get offenders away from the revolving door of crime and prison."

Since then the role of the voluntary sector - invariably bracketed with the private sector - has been a key part of government rhetoric on criminal justice. There were references to it on 22 of the 90 pages of the December 2010 Green Paper called Breaking the Cycle: Effective Punishment, Rehabilitation and Sentencing of Offenders. Crispin Blunt, the prisons minister, has talked of "engaging the voluntary sector to run innovative services that tackle the root of the problems and provide value for money."

Some companies and charities have indeed benefited from new contracts for services in the criminal justice system. But there is little sign so far that the rhetoric has been translated into a general reality. Spending cuts by local and national government have instead dominated the agenda at the same time as public fundraising has become more difficult for most charities and trusts and foundations have less money to give.

The extent of the reduction in funding has been charted by Clinks, the umbrella group of criminal justice charities and voluntary organisations, which published detailed surveys of its 450 members early last year and again a few weeks ago. The latest survey says 95 per cent of organisations have had, or expect to have, a reduction in income, 77 per cent are using their reserves to survive and 55 per cent had made redundancies in 2011 (see main points, below). 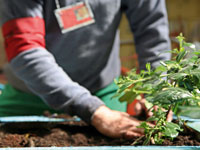 The survey concludes: "Many organisations are now experiencing acute demand for services with decreased resources. There is a higher level and more complex types of need in users. The devaluing of services by using volunteers continues to be a concern. Service users are being impacted by the funding cuts despite the organisations' best efforts."

Charities and voluntary organisations that work in criminal justice provide services ranging from education and parenting classes in prisons to first-night services for vulnerable newly-arrived prisoners, visitor centres for prisoner's families and post-release help with housing, employment and recovery from addiction.

A recent paper by the Third Sector Research Centre, based at Birmingham University, found that 1,743 third sector organisations list offenders as their main beneficiaries and 4,916 say criminal justice was their area of work. Those with offenders as one of their beneficiary groups totalled more than 18,000.

The centre's paper concluded: "Such decreases in funding are likely to have an impact on the services third sector organisations can provide to this high-need group and may ultimately affect the degree to which reoffending can be reduced."

Kate Aldous, programme director at Clinks, says the decrease in income from national and local government comes at a time when other sources of income are also going down and new opportunities for contracting are not materialising as quickly as expected.

"The sector is finding it hard to bid for, and win, the contracts that are available," she says. "The vast majority are going to the private sector and the voluntary and community sector is having to subcontract."

She thinks there are similar pressures in many parts of the voluntary sector, particularly in connection with contracting and payment by results. "We are seeing different concerns in different areas - in health, for example, they are dealing with a different set of changes," she says. "But we're in limbo because plans for outsourcing have not yet come through, and this limbo is fairly widespread."

The main problem caused for Clinks members by payment by results is cash flow, she says: "We think the payment by results part of a contract should be no more than 10 to 30 per cent of the value - that's the difference between making it workable and achieving what the government wants, and it not working for the voluntary sector."

- The Clinks report, When the Dust Settles, is based on 75 responses to an online survey, 109 responses to a survey on payment by results, detailed interviews with 14 members and consultations by three members with their service users.

- It says 95 per cent of respondents have experienced, or are expecting, a reduction in income; 77 per cent are using their reserves. Those that obtained government transition funding found it helpful.

- Payment by results contracts are increasing, seem to favour larger organisations and are regarded as unworkable by some. Problems cited are cash flow, how to define results, the skimming of easy targets and the role of prime contract providers.

- Last year, 55 per cent of respondents made redundancies and 40 per cent have staff on redundancy notices or expect to do so. Morale is low in many cases and volunteers are being used more, which is problematic for some organisations.

- Working in partnership is on the rise. Some organisations are finding local authorities more willing to engage with them, but many small ones are critical of the government's localism agenda and no longer see it as an opportunity.

- Some organisations have changed their business models or governance structures, and some have become more commercial and started providing different services.

- There is acute demand for the services of many organisations whose resources are decreasing. Respondents reported higher levels and more complex types of need in users and were concerned about increased marginalisation and deprivation.

One of this charity's residential drug rehabilitation projects closed down after the local authority cut all Supporting People funding, which paid for the support provided to residents of the project. "The knock-on effect is about 20 people were made homeless - and, ironically, they had to apply for housing to the same local authority that had just cut the funding," says a staff member. Other councils have not cut funding to the same extent, he says, but nationally the charity has lost about half of its Supporting People funding, which used to be approximately a quarter of its total income. Overall, it gets about 70 per cent of its funding from the public sector with the rest coming from rents, donations and legacies.

This charity asked to remain anonymous

- Mentoring for ex-offenders and those on community sentences: Footprints 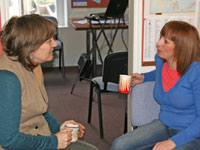 This small charity working in Dorset and south Somerset, has lived "hand to mouth" on a series of grants from trusts since 2008. These have become harder to get, so it is doing more fundraising. It has written to small donors who give at Christmas, and one of its well-connected patrons is hosting an opera event to raise money. The charity does not have public funding, but still feels the effects of the cuts. "It is putting us under pressure because the people we work with are getting less support from other services," says Jo Wells, the charity's mentoring coordinator. One stretched prison asked the charity to do its accommodation referrals so it has applied to the Homelessness Transition Fund for money. 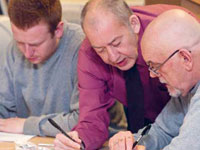 "We have been affected by local authority cutbacks, as have most charities," says Sarah Mallender, Sova's interim chief executive. It did not re-tender for six services where funding was withdrawn, and last month it cut several senior posts in a restructure. Sova is planning to fundraise, especially through corporate sponsorship, which it has not done before. It is a subcontractor for three prime providers in the Work Programme and, unlike some other charities, has received a good level of referrals. Mallender attributes this to getting them from the prime provider rather than from another subcontractor. "We were offered the opportunity to be a second tier provider (that gets referrals from another subcontractor), but we declined," she says.

This charity, which works in 20 prisons, faces closure because it will lose 85 per cent of its funding when the Department for Education ends its grant in April next year. Staff are juggling their normal work with a time-consuming search for new funds. "We are having to complete extensive foundation and trust applications and everyone is going after the same money," says the charity's research manager. Devolution of more public services means the charity has to approach a much larger number of organisations to find work than the handful of central government departments it worked with previously. It is also looking at whether it can get Ministry of Justice funding or charge prisons for its services.

This charity asked to remain anonymous.