Analysis: Is crowdfunding the way forward?

The rise of the internet and the economic crisis have created the conditions for a novel form of fundraising that has had some success. Jenna Pudelek examines its potential

Crowdfunding has been much lauded for its potential to raise money for charities and social enterprises, particularly in these financially straitened times.

Last December, Crowding In, a report by the innovation charity Nesta, estimated that crowdfunding could raise £4.7bn a year for UK charities by 2016.

Crowdfunding - financing projects, charities, businesses and loans through small contributions from many sources - is nothing new. Indeed, Nesta pointed out in its report that public donations have been used to fund, among other things, the building of a base for the Statue of Liberty, mosques on the Indian subcontinent and countless statues worldwide.

But the concept has been thrust into the limelight by a combination of modern technology and the economic crisis. The rise of the internet has made it easier to connect funders with those looking for finance and to bring together people with shared specialist interests.

The success of US-based sites such as Kickstarter, a platform that funds creative projects, and Indiegogo, which raises money for ideas, has led to UK organisations with a social interest exploring the use of crowdfunding.

For example, The Bicycle Academy, a Somerset-based company, raised £40,000 in only six days through the crowdfunding site Peoplefund.it to create a bike workshop. The academy is a for-profit company, but every student will make a bike specially designed for people in Africa under its partnership with the charities Re-Cycle and World Bicycle Relief.

Crowdfunding models include the reward approach, in which funders are offered benefits in return for their donations, and sites that offer funders financial returns for their investment. The way the sites operate varies, but a common feature is the all-or-nothing approach: a target amount must be raised within a given timeframe or the contributions are returned to funders.

Phil Geraghty, managing director of the CrowdFunder Network, which includes Peoplefund.it, argues that there is great potential for crowdfunding in the charity sector.

"Crowdfunding offers validation that a new charity is needed and a new transparency over where the money is going," he says. "People who back these projects have a deeper connection with them and are keen to promote the projects to their networks. I think the landscape for charities is going to change radically over the coming years. The question is, how quickly can established charities adapt to this change?"

Several charities have adapted the concept for their own use. Cancer Research UK set up the website five years ago (MyProjects see case study) and Leukaemia & Lymphoma Research launched its own challenge-based platform, Pledgeit, in November. The idea behind Pledgeit is that existing supporters challenge their families and friends to anything from a triathlon to trying stand-up comedy, and pledge money in return. Thomas Muirhead, head of digital at Leukaemia & Lymphoma Research, says the platform is still in a testing phase, but is already allowing the charity to reach new supporters. "We're using it to encourage action and support, rather than for individual projects," he adds. "With crowdfunding generally, it will be fascinating to see whether it will grow."

Liam Collins, policy adviser at Nesta, says more charities should investigate the potential of crowdfunding but warns that, as with applying for grants, it takes skill and effort to be successful. He advises charities to get a core group of donors engaged with the projects so that potential funders see there is interest as soon as it is launched. "If you have a funding window of 30 days, it's vital to get momentum before your pitch goes live," says Collins. "Be clear about what you are trying to achieve and be realistic about the amount you're asking for. Videos work really well in terms of story-telling."

But Karl Wilding, director of public policy at the National Council for Voluntary Organisations, is cautious about the potential of crowdfunding. It is reaching the peak of its "hype cycle", he says, and will soon move to the "trough of disappointment" before it becomes mainstream. He argues that it will take another two or three years for crowdfunding to become established. Wilding also has concerns about "channel shift" - when donors use mechanisms such as crowdfunding instead of giving by more traditional means. He says: "Very few new fundraising approaches are a cure-all for the sector's funding problems, and crowdfunding squarely fits into that category."

Buzzbnk is a crowdfunding website that helps charities and social enterprises that want start-up or growth funding. The site helps projects raise loans or rewards-based donations. Projects can also offer benefits such as vouchers or pre-sale of goods or services in return for funding.

More than half of Buzzbnk, which is a social enterprise, is owned by leading charities and foundations. Theresa Burton, its chief executive and co-founder, says she was inspired by Kickstarter, a platform for funding creative projects, and Kiva, the peer-to-peer micro-lending site. Since its launch in 2011, the platform has raised £545,841 to fund 61 projects, and 32 projects have failed to secure the funding they were seeking through the website. The average amount donated per user for rewards-based projects is £65; the average loan is £350.

Burton says her fellow co-founder, Michael Norton, who also founded the Directory of Social Change in the 1970s, felt fundraising was becoming too focused on impulse donations. "We looked at the concept of reciprocity," she says. Buzzbnk offers various flexible financing models, including revenue participation and loans with interest, but Burton says "any financial return is secondary". 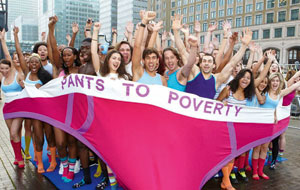 Projects funded so far include a pirate-themed creative centre for young people in Hackney, which raised £7,793. It has also raised £56,865 for the 'Bonk of Pants', a scheme that offers lenders 3 per cent interest each year and other benefits, and then invests the money in Pants to Poverty (right), an ethical underwear brand.

Burton says: "Charities say it's a great way to build their donor base. It is very rewarding, but hard work." She predicts that in three or four years it will be a mainstream way to raise funds.

This case study originally said that Buzzbnk sold shares in the projects listed on its site, which it does not.

Spacehive is a crowdfunding website that was launched last year to raise money for public space projects. Schemes that have received funding include a proposal in Frome, Somerset, to convert an old public toilet into four mini-galleries and a food kiosk. The website also raised £32,000 towards a community centre 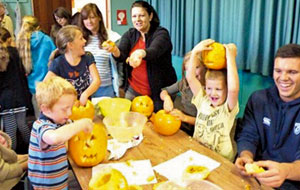 (right) in the former mining town of Glyncoch in Rhondda Cynon Taf, which drew support from local residents, the Wales rugby team, Tesco and the actor Stephen Fry.

Eleven projects have been funded so far, with donations totalling £81,057 from organisations and £4,382 from individuals. So far, only one project has failed to secure funding through the site. Chris Gourlay, founder of Spacehive and a former Sunday Times journalist specialising in architecture and planning, says charities are missing a trick with crowdfunding. "I think charities are probably the sector that has been the slowest to understand the benefits of crowdfunding," he says. "Users are able to back very tangible projects. It is about creating a more engaging experience and reaching new audiences."

About 14 per cent of donations to the site come from organisations such as councils, grant-making bodies and developers. "We see collaboration between the community and it has a powerful effect in drawing the attention of councils and corporates," says Gourlay. "Councils can see what voters want because they are voting with their wallets, and businesses can support projects people really care about."

He admits the platform cannot fund everything in the civic realm, but says it is a great way of funding popular projects. 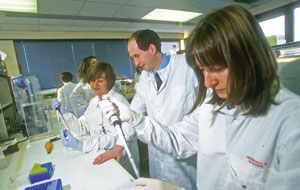 It allows donors to choose which of the charity's projects and initiatives they would like their money to go to. For example, they can specify that their money should go towards funding cancer nurses, or that it is used to help fund a particular research project (left).

Kathryn Toner, head of fundraising products at CRUK, says: "It is a supporter-focused way of looking at things. It is giving people a choice about where their money goes. It is more transparent and tangible." She says its users are a mix of existing supporters and new donors.

The site has raised more than £2m and funded 65 projects so far, which is a relatively small amount given the charity's annual income was £492.6m in 2012. Toner says: "It is not our biggest income stream. It is part of what we want to do at CRUK, which is to ensure our supporters have choice. It is not necessarily about how much income is involved."

MyProjects does not work on an all-or-nothing model, where the individual project listed on the site needs to raise the full amount to receive any money. Instead, the projects that don't raise their target income still get money allocated from the charity's general pot to make up the shortfall. However, donations made through the site to specific projects are restricted to those projects. The charity says the site encourages users to build a community and donors often post comments giving their reasons for choosing a specific project.