Charities are making increased use of doorstep fundraising, their strongest source of face-to-face sign-ups. But the increase in complaints has led to a plan to set up a tighter regulatory regime, as Jenna Pudelek discovers

Doorstep fundraising has attracted less controversy in the past than street fundraising, the more headline-grabbing face-to-face method. But that has been changing recently: charities are doing more doorstep fundraising, complaints are rising and MPs have begun to voice their concerns to the government.

According to the Public Fundraising Regulatory Association, doorstep now accounts for 83 per cent of all face-to-face sign-ups. Meanwhile, street activity has been in decline, with sign-ups down by 47 per cent in 2012/13. The Fundraising Standards Board's Complaints Report 2013 shows that the number of doors knocked on by charities in 2012 was 43.6 million - an increase of nearly 40 per cent on 2010. 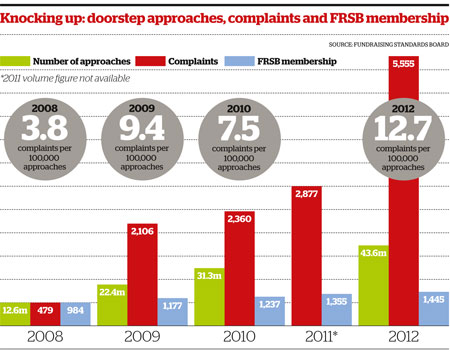 One charity that has been doing more doorstep fundraising is ActionAid. Its marketing manager, Rebecca Parford, suggests that it has become more popular with charities because it gives fundraisers a longer time to speak to members of the public about their cause than they might get in a busy high street.

On the other hand, people can find themselves answering the door at inconvenient times, are unable to walk away as they can in the street and might feel uncomfortable about hearing a charity pitch on their own doorstep. Complaints reported by charities to the FRSB increased by a massive 135 per cent over two years, from 2,360 in 2010 to 5,555 in 2012; the Local Government Association is also concerned about the level of complaints to local councils.

"We would like to see charities and other agencies taking rapid and robust steps to improve in this problem area before councils are forced to intervene to protect residents from poor collectors," says a spokesman for the LGA.

In the past, the PFRA has taken a more hands-off approach to the regulation of doorstep than it does with street fundraising, partly because the former is governed by the House to House Collections Act 1939 and the House to House Collections Regulations 1947, which give local councils the power to issue licences. But the rising number of complaints has prompted the PFRA to devise a new regulatory regime, to be announced at an Institute of Fundraising conference later this month. 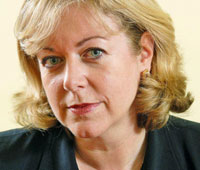 Sally de la Bedoyere (right), chief executive of the PFRA, warned recently that charities were in danger of falling into the same "traps and pitfalls" as they did with street fundraising, including the failure to take media comment seriously or to engage proactively with councils to defuse complaints. "Charities conducting doorstep face-to-face need to get to grips with the issues facing them, not hunker down and hope they'll go away, as some did with street fundraising 10 years ago," she said.

The PFRA compliance programme is expected to be similar to the one it uses for street fundraising, which promotes agreements with councils to limit the number of charities fundraising in an area at any one time. It has already set up a scheme in the London boroughs that allocates "pitches" to charity door-to-door fundraising teams and could serve as the prototype.

The site-management agreements the PFRA makes with councils to govern street fundraising have proved successful in many towns and cities. There are 68 in place, defining matters such as team size, frequency and site locations. A fining regime was also introduced in August last year to penalise charities and agencies that break the rules.

"The laws on house-to-house collections do not give councils a very useful set of regulatory powers," says Toby Ganley, head of policy at the PFRA. "Most councils will provide a licence for the whole council area for three to six months or a year, which does not provide any opportunity to control things such as multiple organisations working in the same place at the same time."

The laws also give local authorities only limited powers to refuse a licence. Grounds for refusal include whether the licence-holder has been convicted of a crime or is being paid excessively from the amount collected. When Cardiff Council refused to give licences to two textile collection firms because the proportion of the proceeds they donated to charity from previous collections was less than 10 per cent, the decision was overruled by the Cabinet Office, which handles appeals.

While the PFRA prepares to announce its new regulatory regime, the FRSB is meeting the charities that reported the highest level of complaints about doorstep fundraising to look at the issues in more detail. According to its recent report, the behaviour of doorstep fundraisers was the greatest cause of complaint; 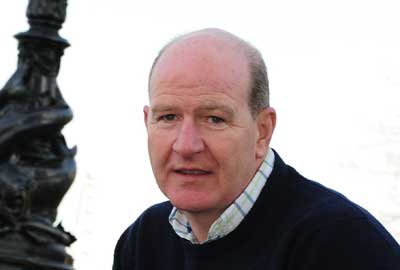 but Alistair McLean (right), the FRSB's chief executive, points out that this could refer either to fundraisers being rude deliberately or causing offence inadvertently.

One complaint, for example, was about a fundraiser who was unsuccessful in securing a sign-up and failed to close the garden gate when he left. The householder, who had disabilities, was very distressed and complained to the charity. "Behaviour is such a broad heading," McLean says. "Nevertheless, it was quite a conspicuous component to the report."

McLean also points out that the Office for Civil Society, responding to the FRSB complaints report, made it clear that MPs had also expressed concerns about doorstep fundraising. "Now is the time for the sector to respond to these issues," he says. "It's for charities to make sure that staff are informed and advised about the Institute of Fundraising code and guidance."

The IoF's Code of Fundraising Practice outlines both the legislation covering house-to-house collections that fundraisers "must" comply with and the good practice guidance they "ought" to follow. Its guidance says, for example, that collectors ought not to approach people who might be vulnerable adults, should avoid causing obstruction, congestion and nuisance to the public, and should operate only between 9am and 9pm on weekdays, and 10am and 9pm at the weekend. National exemption orders.

Another issue is national exemption orders, which allow charities that have obtained licences in up to about 100 local authority licensing areas not to have to apply for a licence each time they want to fundraise. Lord Hodgson's review of the Charities Act 2006 proposed abolishing the orders, but the government rejected the proposal in its recent response to the review. 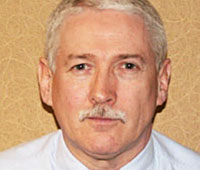 John Miley (right), vice-chair of the National Association of Licensing and Enforcement Officers, says national exemption orders are "the bane of my life - charities can turn up at any time. They're encouraged to notify us, but they don't have to." He says it is difficult for councils to regulate doorstep activity. "We're dependent on people contacting us to complain," he says. "No one has the manpower to watch people knocking on doors, so it's very reactive."

The PFRA acknowledges that some charities with national exemption orders are better than others at notifying councils when they plan to fundraise in their area. Marie Curie Cancer Care is among the 44 charities that have an exemption order: it says its door-to-door agency sends a letter to every local authority where it intends to fundraise, as a matter of courtesy.

Some charities are also taking steps to monitor the behaviour of their doorstep teams. Marie Curie last year carried out an external audit of its fundraising agency to check it was complying with best practice, a spokesman says. It also checked up on training, and a mystery shopping agency shadowed the teams on the doorstep, completing a report about their approaches to and interaction with members of the public, he says: the "shadow" pretended to be joining the team as a fundraiser, but was actually monitoring behaviour.

Rebecca Parford of ActionAid says it insists the three agencies it works with, covering south-east England and Northern Ireland, inform the relevant local authorities about their visits. It is also piloting a small in-house team in London. Parford says: "We train our fundraisers to the highest standards so they understand and follow the IoF's guidelines strictly, and we have not noticed any increase in complaints from using doorstep compared with street or private-site fundraising."