The Third Sector Research Centre has studied the details of higher pay in the sector and compared it to the private and public sectors. Stephen Cook reports

Criticism of the pay of senior staff in charities has been a recurrent theme this year, reaching one of its high points when Gwythian Prins, a recently appointed member of the Charity Commission board, told Third Sector in September: "People are horrified by these mega-salaries - it really is a problem."

The National Council for Voluntary Organisations made a move to defuse the controversy in October by setting up an inquiry, which will next year recommend guidelines for charity trustees, who have the ultimate responsibility for setting top salaries.

Another response has now come from Professors John Mohan and Steve McKay, two academics at the Third Sector Research Centre, who note that the evidence base in the research that has featured in the media was limited and could not be used to draw sound conclusions about pay levels in charities generally.

They point out, for example, that Third Sector's review in March of top salaries looked only at the 150 charities with the largest fundraising income, and that a year-by-year comparison of chief executive salaries by the consultancy nfpSynergy looked only at 50 well-known charities.

Mohan and McKay agree that a very small number of charities pay their highest-paid employees at a very high level: they found one charity paying one person £990,000 in 2011 and another paying someone £920,000 in 2010. "These are high numbers by (almost) any standards, and somewhat removed from the levels found in other charities," they say in their latest research paper.

But to widen the picture, they drew upon salary data from 9,700 charities in a database of more than 10,000 that has been set up by the TSRC with the National Council for Voluntary Organisations, which uses it for its annual UK Civil Society Almanac. Charities with incomes of more than £500k are required by the Statement of Recommended Practice to list in their accounts, in bands of £10k, the number of people paid more than £60k, and data clerks have recently fed that information into the database. "We probably couldn't have done this exercise until this year," says Mohan. "We brought it up the agenda a bit because it is clearly an area of public concern on which we were in a position to throw some light. We have a data source that is representative and not driven by short-term concerns or a focus on particular subsets of organisations - that is its strength."

The key conclusions from their examination of higher salaries in the TSRC/NCVO database are:

- Data from the representative sample indicate that there are about 11,600 staff in charities in England and Wales who are paid at least £60k. 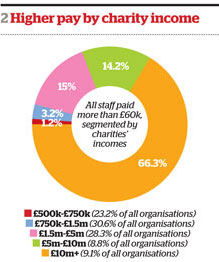 - 66 per cent of higher-paid staff are found in the 9 per cent of charities with incomes of more than £10m a year (see table two, right).

- In most charities, most of the time, the great majority of highly paid people are somewhere in the £60k-£80k range. 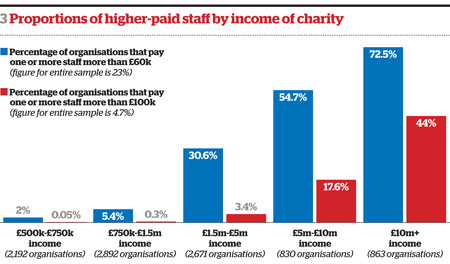 - The strongest predictor of salaries of more than £60k is the size of the charity's income (although one charity with an income of £1.4m pays one person £170k).

- Charities based in London are more likely to pay higher salaries.

- Independent schools are significantly more likely, and religious organisations significantly less likely, to pay at least one member of staff at least £60k (see table 4, below). 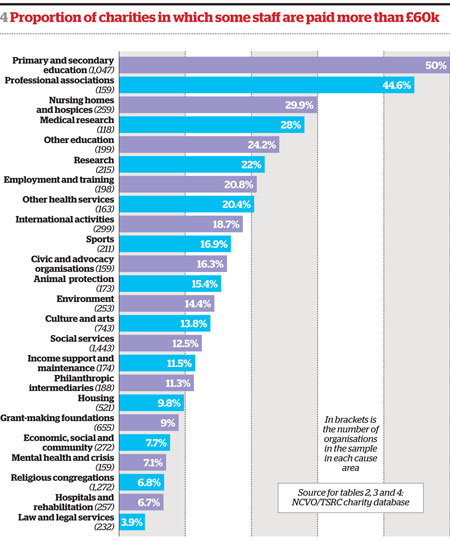 - There is no evidence that pay of more than £60k is associated with a charity's reliance on a particular source of funding.

Mohan and McKay also decided to extract from other surveys some comparisons of higher pay in the different sectors. "There is a wider debate going on in society about higher pay and, arguably, about income inequality, so we wanted to see whether the patterns we see in the charity world were similar to or different from those in the private or public sectors," says Mohan. "Our conclusion is that the proportion of people who are paid high salaries in charities is considerably lower than in other sectors."

To make the comparison, they used figures from the latest Annual Population Survey by the Office for National Statistics, which show that 2.7 per cent of workers in the third sector are paid between £60k and £100k, compared with 4 per cent in the public sector and 4.8 per cent in the private sector (see table 1 right) 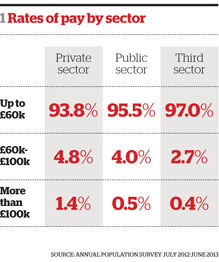 However, other surveys indicate that the differences between the sectors might be more pronounced. KPMG's Guide to Directors' Remuneration 2012, produced by the financial services firm, shows that chief executives in the FTSE 100 companies had median earnings of £830,000, excluding bonuses benefits and share options.

"Such rewards are exceptional," say Mohan and McKay. "But for comparison, hardly any salaries in the charitable sector exceed the median for the FTSE 100; we found very small numbers of salaries in the charity sector were greater than £250,000, and most of these were in medical or other health-related organisations."

They also looked at an Institute of Directors study that found that the typical salary for the chief executive of a small business with a turnover in 2010 of up to £5m was £70k. "In contrast, only 22 per cent of charities with turnovers of up to £5m in 2010/11 reported that they had any employees paid more than £60k," they say.

They also note that some estimates of the third sector workforce are considerably higher than the figures used by the Office for National Statistics. "Our view is that the Annual Population Survey figure of 1.4 per cent is likely to be an over-estimate of the proportion of charity sector workers who are paid salaries of £60,000 or more," they say.

Steve McKay is professor of social research at the University of Lincoln.