Analysis: Fundraising complaints - Are some methods being pushed too hard?

For the third year running, the Fundraising Standards Board has devoted two of the three 'in focus' sections of its annual Fundraising Complaints Report to direct mail and telephone fundraising.

The reasons are clear: these two fundraising methods have consistently attracted the highest numbers of complaints, and in the case of direct mail the numbers are growing at a higher rate than charities' use of the methods (see table, below).

Direct mail attracted nearly 15,000 complaints last year (almost half the total), and the report says 32 per cent of them related to "frequency of mailing". The previous year, "poor data" attracted most complaints, and the year before that it was again "frequency".

Complaints about items included in direct mail packs such as pens and stickers, which were the subject several years ago of concern that resulted in a tightening of the relevant Institute of Fundraising code of practice, were on the rise in 2011, the report says.

But there was one complaint for every 11,500 pieces of direct mail last year, and one for every 2,500 telephone fundraising calls. Consequently, many charities might decide the rate is too low to worry about and continue as before.

Complaints about outdoor fundraising such as fun runs and challenge events increased by 187 per cent from 437 in 2010 to 1,253 in 2011, even though the number of event participants registered with FRSB member charities fell by 18 per cent from 1.2 million to 1 million.

Concern about the social and environmental impact of such events has grown in recent years, prompting the Institute of Fundraising to revise its code of practice on outdoor challenge events in 2010.

The Three Peaks Challenge is one of the most popular outdoor fundraising events and involves climbing the highest mountains in England, Scotland and Wales, often within 24 hours.

Adam Naylor, manager of the Wasdale Head Inn at the foot of England's highest mountain, Scafell Pike in the Lake District, still has serious concerns about the damage charity walkers do to the area.

"Some people who do it leave rubbish, defecate behind walls and have no respect for the local communities," he says. "We are at the worst leg of the three peaks. People come from Fort William in Scotland where they've bought all the things they need. They arrive here between 11pm and 4am and turn around in our car park, revving engines and setting off car alarms."

Nick Johnston, events manager at Three Peaks Challenge Ltd, which gives advice to charities, says: "Challenge participants account for only a small group of those who climb these mountains each year - we estimate that 30,000 people complete the Three Peaks Challenge, while 250,000 climb Snowdon." 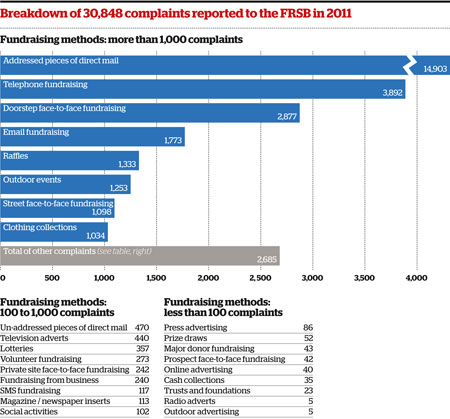 The FRSB has decided that complaints about email fundraising by charities, which grew by 282 per cent from 464 in 2010 to 1,773 in 2011, will be the subject of more detailed examination in next year's report.

The increase happened in a year when the volume of emails sent by FRSB members increased by 25 per cent from 86.8 million to 108.7 million. This was a greater recorded increase in donor contacts than in any other kind of fundraising.

Alistair McLean, chief executive of the FRSB, said that email would be one of the regulator's 'in focus' fundraising methods in next year's report. This will examine the reasons for complaints, such as data protection and frequency.

"It is an interesting fundraising technique, and because of its growth and the level of complaints, it is certainly one to watch," McLean said.

Peter Lewis, chief executive of the Institute of Fundraising, said there were very few complaints compared to the volume of asks.

"That does not mean people should be complacent. If there are trends that can be picked up, that will help us to see what issues we need to address," he said. 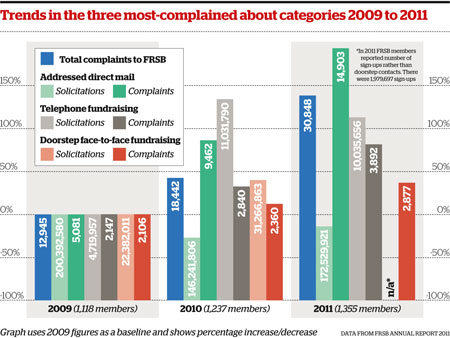 THE STORY IN FIGURES

9.6bn donor contacts by members - 7.1 billion of these were through television, radio and billboard adverts

67% of member charities reported no complaints

3 complaints adjudicated by the FRSB board, of which one was upheld