Analysis: How the lid came off at ShelterBox

Tom Henderson, the founder of the ground-breaking disaster relief charity, has been dismissed as chief executive for gross misconduct and is pursuing an unfair dismissal claim. Andy Hillier reports on how the crisis unfolded

The international relief charity ShelterBox, which distributes green boxes containing a tent and lifesaving supplies to disaster victims, has been a notable success: in 12 years its annual income has grown to £16m and so far this year it has helped more than 8,000 families.

But it has recently been rocked by the decision of its trustees to dismiss for gross misconduct its founder and chief executive, Tom Henderson, after a row resulting from an allegation that he had tried to place an order worth £650,000 with a company connected to his son John.

In a statement earlier this month, the trustees said they had concluded, after an investigation earlier this year, that Henderson had failed to abide by the charity’s "related-party transactions policy", failed to give an adequate explanation of his actions, neglected the charity’s intellectual property rights and put the charity at risk.

Henderson disputes this, denies wrongdoing and has lodged an employment tribunal claim for wrongful dismissal. He also plans to start a new charity that will "take disaster relief to the next level" by including water, sanitation and medical facilities in addition to shelter.

ShelterBox’s links with companies owned by Henderson’s son John go back some years. Its latest annual report says that it purchased goods and services worth £52,081 in 2011 and £477,810 in 2010 from Ocean Fabrication Limited and Camping Solutions Limited, of which John Henderson was director and sole shareholder.

With the trustees’ knowledge, the companies supplied ShelterBox at a competitive price with the Frontier Stove and a specially designed multitool. But in 2010 the charity received a complaint from a member of the public about the purchases that led it to review its "related-party transactions" policy and introduce stricter procedures.

The events that brought matters to a head are detailed in a serious incident report from ShelterBox to the Charity Commission that was made public earlier this month. It says that in 2011 Tom Henderson decided that certain items should be purchased from new suppliers, and in January 2012 placed a £650,000 order with Found International for 2,000 disaster-relief tents, 1,000 multitools and 3,600 toolkits. The report says Found International was discovered by the charity’s head of finance, Michael Johns, to be connected with Camping Solutions Online Ltd, another John Henderson company: "It was feared that the proposed order was a related-party transaction that had not been reported by the chief executive in accordance with the charity’s own internal processes, and that the previous transfer of business between Camping Solutions Limited and Camping Solutions Online Limited (now trading as Found International) was a process to circumvent the related-party transaction policy."

A spokeswoman for the charity has confirmed to Third Sector that its investigation did not successfully establish that Tom or John Henderson were closely involved with Found International. But as a result of the suspicions, the report says, the order was not placed, the charity severed all ties with Camping Solutions Online Limited and the trustees commissioned an investigation by the solicitors Foot Anstey in April this year. This lasted longer and cost more than anticipated, the report says, largely because of "the lack of cooperation from the chief executive and his son, John Henderson".

The trustees considered that the charity could not afford a more forensic investigation, the report says, but felt able to conclude from the solicitors’ inquiry, which has not been made public, that there "was sufficient evidence at this stage to prove a concern about managerial incompetence and a lack of awareness of the attendant risks". The report adds that there were grave concerns "about the functioning of the relationship between, on the one hand, the board and senior management team, and, on the other hand, the chief executive officer".

Henderson disputes many parts of the serious incident report. Speaking to Third Sector, he says that he spent approximately 180 days a year travelling, was not directly involved in the ordering process and only found out recently that his son John was acting as a designer-engineer to Found International. "There was a team in place that would order the stuff and I would simply look in on a monthly or two-monthly basis and ask ‘what are we short of?’" he says.

But the board decided, in the light of the solicitors’ report, that Henderson could no longer hold an executive role and offered him a presidential role in recognition of his contribution to the charity. ShelterBox says in its recent statement that Henderson "reneged" on an agreement to take on a presidential role and made it clear to the board that "it was chief executive or nothing else".

At a board meeting on 23 July, the board unanimously voted that Tom Henderson could no longer remain as chief executive, and he was formally dismissed by letter. He used an internal appeal process but the decision was recently upheld. A number of ShelterBox’s 20 international affiliates raised concerns and some threatened to withdraw from its network.

Henderson disputes the allegation of gross misconduct and the reasons for his dismissal. He says both he and his son engaged fully with the solicitors’ investigation and that the copy of their report that he had seen concluded that he had acted "in the best interests of the charity" and that "everything that was bought from his son was bought at cost or less". The report added, he says, that "so far as the trustees are aware, no products were purchased with a view to a direct or indirect financial gain".

Henderson says: "After the investigation was completed, the chair told me that there was nothing in that report to worry me and he also said I could be proud of my son. In that report it was discovered that my son had been working
hard in the background for many years doing his best to save ShelterBox many hundreds of thousands of pounds."

Henderson argues that he was acting in the interests of the charity by seeking additional suppliers for critical items in case existing suppliers went out of business. He also denies that an order was ever placed with Found International, and instead says that the alleged order was merely a proposal for the charity to consider.

He believes that the main reason for his removal was a personality clash with the chair, Ian Munday, who, he says, did not like his management style. "I believe that it started off with one of the senior management team quite rightly raising what he believed to be a problem," he says. "But then I believe that Ian Munday saw it as an opportunity to get me out of the door and he jumped in with both feet. There was a huge difference between Ian Munday’s attitude and mine. And that’s where part of the conflict came from."

He admits he can be forthright but says that is why he has been successful. "What I say is, ‘judge me by what I’ve done and not by what you’ve heard’. Why do you think ShelterBox sits on the world stage as a leader in disaster relief? It’s because of my management style. If that irritates people, forgive me. But I’m focused and I need to be focused because I’m in the business of saving lives in a disaster."

Henderson also believes that the charity failed to follow the proper processes. He says a barrister engaged by ShelterBox to handle his unsuccessful appeal against his dismissal pointed out in a letter in October that there had been "no notice from the employer that it was contemplating dismissal on the grounds of misconduct and no disciplinary hearing". The barrister, Henderson claims, concluded that he was wrongfully dismissed and entitled to damages.

ShelterBox declines to comment on Henderson’s allegation that a personality clash with the chair was behind his departure and says it will robustly defend the claim that he was wrongfully dismissed.

A spokeswoman says: "The board of trustees worked with Mr Henderson for months to resolve a number of matters around his capability and conduct until they unanimously agreed that he could no longer be chief executive.

"On at least three distinct occasions, Mr Henderson has remained unwilling or unable to explain the nature of the £650,000 transaction. As trustees are bound by UK law to protect the charity and were unable to reach resolution, they dismissed Mr Henderson for gross misconduct."

FACTS AND FIGURES ABOUT THE CHARITY:

ShelterBox was founded in 2000 by Tom Henderson, a Rotarian and former Royal Navy search-and-rescue diver, after he realised that most disaster relief was confined to food and medicine.

The large green ShelterBoxes are tailored to a particular disaster but typically contain a tent for an extended family, blankets, water storage and purification equipment, cooking utensils, a stove, a basic tool kit and a children’s activity pack.

Since its inception, the charity has responded to almost 200 natural or man-made disasters in more than 75 countries.

The charity had an income of about £16m last year. Approximately half of the money came from public donations, while the remainder was donated by affiliated organisations overseas. 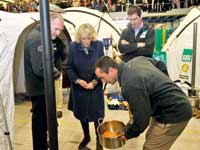 HRH The Duchess of Cornwall (right) has been president and royal patron of the charity since 2007.

ShelterBox’s head office is located in Helston, Cornwall, and it estimates that it has put more than £4.5m into the local economy over the past two years.