Analysis: The Office for Civil Society

Changes at the OCS mean it has less money to dispense and spends more time promoting the role of the voluntary sector across government and in society. David Ainsworth talks to the officials and the charities minister, Nick Hurd

Over the past few years, the Office of Civil Society has changed significantly, not least in the amount of money at its disposal. Between the end of the last parliament and the end of this one, its annual budget will have shrunk by about 75 per cent. In 2009/10, the last year of the Labour administration, what was then the Office of the Third Sector had a total of £227m to spend on the sector. But in 2014/15, the last year of this parliament, the Office for Civil Society will have only £56m.

The Labour years were marked by some big spending programmes, such as the infrastructure programme Capacitybuilders, the loan fund Futurebuilders and the youth volunteering initiative v. Together, these were worth a total of £563m. Under the coalition, the only big programmes have been the £100m Transition Fund, now closed, and the National Citizen Service, currently run by the OCS but not funded by its core budget. Most programmes are small, often match-funded, and intended to have a pump-priming, catalytic effect.

This fall in the funding of the OCS suggests that its staff numbers might also have shrunk. But this is not the case: the office inherited between 80 and 90 people from Labour, and OCS officials say that number has changed very little. One reason is that its policy work has not been reduced in line with its programme delivery. The OCS is part of the Government Innovation Group, which includes teams working on other Cabinet Office priorities such as open data, open policy-making, and the behavioural insights team, also known as the 'nudge' unit. Staff in the GIG are deployed flexibly.

OCS staff are overseen by Helen Stephenson, joint director of the group, and operate in five policy teams, two of which are responsible for areas that have been added to the office's responsibilities by the coalition government. One of these two is the National Citizen Service, the expanding volunteering programme for 15 and 16-year-olds, which will be transferred to an independent trust next year and will cost £250m a year by 2016. The other is youth policy and strategy, which the OCS took on from the Department for Education earlier this year.

Core civil society issues are handled by the three other teams: the sector support team, which works on charity law, cutting red tape for charities and improving relationships with local enterprise partners and local authorities; the social action team, which promotes measures to encourage the giving of time and money and grow community involvement; and the social investment team, which works to develop finance for the social sector.

In general, civil servants in the OCS see its role as fostering civil society by acting as a catalyst for increased giving, volunteering and engagement in communities, and for more delivery of government services by charities. This involves developing better policy for charities and acting as an advocate for the sector across local and central government. Nick Starkey, head of the sector support and local intelligence team, talks in a briefing with Third Sector about creating "better, smarter and more interactions" between civil society and the state.

This means the OCS must communicate constantly with both the sector and other parts of government. "The two come together," he says. "We talk to the sector a lot about things such as the lobbying bill, European funding - you name it. That gives us credibility to talk to the rest of government; quite often our job is to tell them that using the sector is a better way of doing things."

The team's role concerns local as much as central government, he says, and involves persuading local authorities and local enterprise partnerships of the value of supporting the sector. And he says the OCS interacts frequently with charities of all sizes. "Smaller charities tend to approach us about capacitybuilding and funding," he says. "Larger organisations have a much wider range of issues."

Kieron Boyle, head of the social investment and finance team, says the focus on advocacy in all three core OCS teams comes alongside programme delivery, and civil servants are attracted by the combination of conceiving policy and delivering the programmes that policy produces. "I don't think we can draw a distinction between delivery and policy functions," he says. "It's part of the power of the OCS model that you have the same team working on policy design and delivery."

Sara Allen, joint head of the social action team, which encourages volunteering, giving and community engagement, says morale in the department is extremely good and many civil servants who move elsewhere choose to return because they value the work of the OCS. "It's amazing fun and very rewarding," she says. "Doing this job is a massive privilege."

'Slipping down the hierarchy'

Sector leaders who work with the office give positive reports about the civil servants who work there, but they question whether it has the leverage it needs in Whitehall to achieve its aims. "There are some good people in the OCS who understand the sector," says Stephen Bubb, chief executive of Acevo, who has worked in the sector for more than 13 years. "But it doesn't have the clout it had in its glory days. It had more money then. Its leader was a minister of state and its civil servants were seen as players. Recently, it's been slipping down the hierarchy in Whitehall."

Bubb has recently said that there is a "sinister agenda", opposed to charity campaigning, that involves some government ministers, other MPs and parts of the media. He feels the treatment of the OCS reflects this. "The fact that the OCS is losing influence is part of a broader problem with a coalition government that doesn't understand our sector," he says.

Bubb's arguments are robustly challenged by the Minister for Civil Society, Nick Hurd (see Interview, page 10); and Bubb concedes that the current standing of the sector is higher than before the creation of the Office of the Third Sector in 2006. "A decade ago, the sector had a policy unit in the Home Office," he says. "It wasn't quite in the basement, but it might as well have been."

Dan Corry, chief executive of the sector think tank New Philanthropy Capital and a former head of the Number 10 policy unit under Gordon Brown, shares many of Bubb's concerns.

"Everybody likes the people at the OCS," he says. "But there was a period under the last government when they had more money and power. They had a Minister for the Cabinet Office, Ed Miliband, who fought for them, whereas I'm not sure that's true of Francis Maude, the incumbent. You can see this with something like the lobbying bill. I'm not sure anyone asked the OCS about it.

"We're struck by how much the OCS focuses on social investment, volunteering and the NCS," Corry says. "Other than that, they have little bits of funding for this, that and the other."

- Read our interview with Nick Hurd 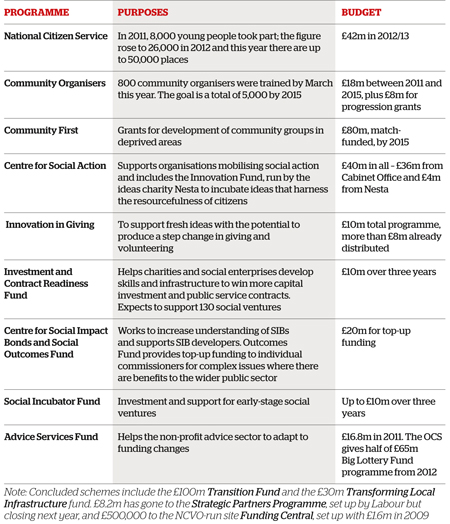