The transition to HMRC's new digital claims system Charities Online has been reasonably smooth, but take-up has been slow and some doubt whether smaller charities can adapt. David Ainsworth reports

So far, 40,000 have signed up to Charities Online, the new digital claims system for Gift Aid that HM Revenue & Customs introduced this month after a six-month transitional period.

Normally, between 60,000 and 70,000 charities claim Gift Aid each year, and HMRC says it would like to have had a few more signed up by now. But it says the new system has been a model of consultation and will make it quicker and easier for charities to claim. There has been no sign of the technical disasters and cost overruns that have bedevilled some government IT projects.

Sector leaders asked for the system to be introduced and see many advantages in it, not least that it could be a stepping stone to a universal Gift Aid database. But they say the transition has not all been plain sailing and there are still questions to be answered, such as whether smaller charities will turn away from Gift Aid.

Chris Lane, policy officer at the Charity Tax Group, says charities have had to devote a lot of resources to making the change work. "It hasn't been the easiest transition," he says. "In a lot of cases financial teams have been left waiting for the income while it's being sorted out. It was sprung on the sector a bit, and we had to fight for the transitional period, which hasn't been quite long enough."

The new system offers three ways to claim: a spreadsheet option for most charities, a database option for the largest organisations and a new, more basic paper form. Some major charities have struggled seriously with the database option, Lane says. Several have had problems with their software suppliers that are likely to render them unable to submit their claims.

Lane is also concerned at the rate of take-up of the new model. Figures from August show that more than half of charities were still claiming with the old paper form. "The biggest question for us is about small charities," he says. "Will they take up the new system?"

Richard Bray, regulatory and taxes manager at Cancer Research UK, also expects that most problems will be experienced by very large and very small charities. For larger charities, he says, there has been significant extra work and expense in setting up the database option. Many smaller charities, on the other hand, are run by volunteers and might be tempted to step away from Gift Aid altogether, he says.

"Smaller charities will have to register to claim online," says Bray. "They might need a newer version of Excel. The new paper forms are much more arduous to use and, despite all of HMRC's efforts, some will not have realised that things have changed. Is this really something you want to try to figure out on a Sunday afternoon?"

Bray says that charities also face a number of technical problems after they sign up. Some things that they could do previously are now excluded, he says - for example, there are stricter rules about when multiple donations can be submitted on the same line. And there are extra things charities now have to do to make claims, such as split out anyone who brings in more than £500 in a sponsored event. 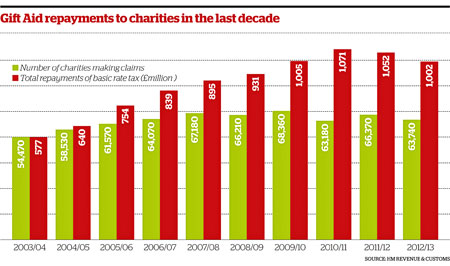 Peter Mills, programme manager of Charities Online at HMRC, says the project marks a high water mark for communication from his department and he is optimistic about the future. "This project has had an unprecedented level of customer consultation and engagement," he says. "I would have hoped to have a few more people signed up, but a lot of people took advantage of the transitional period to make their one claim a year. They won't need to make a claim until at least 12 months down the line."

Mills says the new system will allow applications to be paid significantly more quickly - in many cases, within two or three days - and HMRC will confirm to charities that it has received their claims. It will also allow HMRC to assess more accurately whether a claim is fraudulent and to decide more effectively which charities to audit.

Most agree that in the long term there might also be other benefits. An online database might make it easier to introduce a universal Gift Aid database - another long-term goal for the charity sector. Such a database would contain donor details, a confirmation that they are taxpayers and a declaration showing that all their donations should be Gift-Aided. This could make record-keeping much easier for charities. 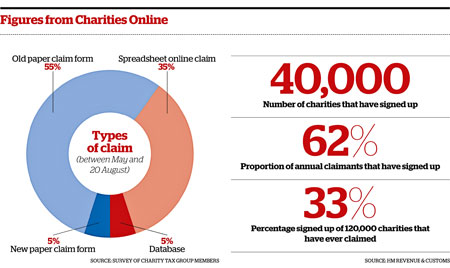 A key test of the success of the new system will be if there are more claims. But Katherine Smithson, a policy officer at the Charity Finance Group, says that a number of factors will make it hard to gauge the effect. Figures for both the number of claimants and total repayments will be affected by the level of overall giving, quicker repayments under the new system and the fact that many organisations might have changed their claim dates in the first year to take advantage of the transitional period and postpone registration. Smithson said the CFG would be pressing HMRC to collect data to measure the "trajectory of the new system".

"We're still in the first year," she says. "The majority of charities make only one claim a year, so we won't know how this has worked out until we get to the end of the tax year. The main thing we want to get across is that this isn't over yet." 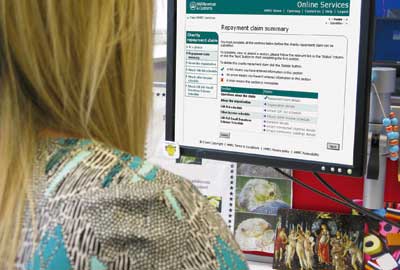 Charities have to register with HMRC online services and then with the Charities Online service. Once signed up, any charity making a claim of less than 1,000 lines can file by completing an online form, transferring information from their database onto a spreadsheet and sending it in, attached to the form.

HMRC expects that most charities will make claims of less than 1,000 lines. A line usually contains the name of a single donor, but not necessarily - it could, for example, refer to money collected from a single sponsorship event. Charities will be able to make more than one claim, so an organisation that sometimes makes claims of more than 1,000 lines can simply submit two forms together.

But larger charities are likely to make much larger claims - Cancer Research UK, for example, make claims of up to 500,000 lines - and are expected to develop their own database software. Up to 70 software providers have expressed an interest in providing software that charities will be able to use to file claims.

HMRC has also introduced a new paper form, replacing the existing paper form, the R68i. The new form is designed so that HMRC can scan the information into the online system.

The new system requests some information that was not required under the old system, such as donor postcodes, although there will be a transitional period until April 2014 when that information is not required.

The new system must also be used for applications for payment under the new Gift Aid Small Donations Scheme, which allows charities to apply for tax relief on up to £5,000 of small cash donations that are not accompanied by Gift Aid declarations.

THE HISTORY OF CHARITIES ONLINE A LONG WAIT, THEN A HURRIED LAUNCH

Charity umbrella bodies have campaigned for the introduction of online Gift Aid for several years. It was one of the key demands during consultations on Gift Aid reform in 2010.

At the time, HMRC said the move was likely to be several years away. But since then the government has adopted a digital-first policy, designed to move all interactions with government online, and has prioritised the introduction of new online systems.

However, Charities Online has been slowed down by the introduction of the Gift Aid Small Donations Scheme. A new mechanism was needed to allow charities to claim under the GASDS, and HMRC decided to combine the creation of that mechanism with a reform of the main Gift Aid claims system.

The system was delayed for six months to wait for the GASDS rules to be finalised, then delayed again because of the need to introduce Real Time Information, a new HMRC computer system for reporting pay-as-you-earn information.

After a long period of discussion, the system was launched in a hurry: HMRC made the original announcement in December, with a start date at the end of April. But charities complained that the timescale was far too tight. HMRC eventually backed down, introducing a six-month transitional period during which charities could use both the old paper forms and the new system. That period ended last month.