Analysis: How would a Scottish 'yes' vote affect charities?

Independence for Scotland would have serious implications for charities that work on both sides of the border, according to some commentators. A few organisations are making contingency plans, Ian Griggs discovers, but many are choosing to wait

A referendum asking Scottish voters whether they want their country to be independent is due in the autumn of 2014. A poll earlier this month by Angus Reid Public Opinion found that 32 per cent of Scots support independence, 47 per cent are against it and 20 per cent are undecided. But the serious campaigning has not yet begun and the high proportion of 'undecideds' suggests the likely result remains unclear.

If the result is 'yes', charities that work only in Scotland or England are unlikely to feel a strong effect, and some charities that operate across the UK do not think they will be affected either. Oxfam, for example, works in 94 countries and does not envisage Scottish independence having a negative impact on donations.

But there are likely to be serious implications for thousands of charities that operate on both sides of the border, especially those working in health, welfare or social care. At the very least, they might have to reconsider their fundraising strategies and branding. Some of them might need to make their Scottish operations into separate entities to demonstrate that they are spending money on projects or beneficiaries in the donors' own country.

"We've all heard of 'food miles', but I think the concept of 'fundraising miles' might come into play, post independence, with certain charities perhaps trying to show donors that their money is being spent within 100 miles of where they live," says Joe Saxton, the consultancy's co-founder. "Many domestic charities are going to be able to raise far less money for their causes."

Saxton argues that charities that have a token member of staff working north of the border would have to commit to an all-or-nothing approach, either hiring more staff there or pulling out of Scotland altogether.

"If the UK ceases to exist, there will have to be a complete separation of the Scottish element of charities that already work in Scotland," he says. "Scottish independence will have to mean independence for Scottish charities as well, because including Scotland in the national fundraising plans of UK-wide charities will become as odd as including Belgium. I dread to think how little UK-wide charities have done about the possible ramifications for them."

Earlier this year, the Carnegie UK Trust published A Charitable Concern, based on research conducted among 164 charities in Scotland that have annual turnovers of more than £500,000. More than half operate only in Scotland, and nearly a third are Scottish offices of charities with headquarters elsewhere.

The researchers asked the charities what steps they were taking to meet the challenge of possible independence. Eighty-five per cent of respondents said that their board of directors had not requested any information on the possible impact, and 90 per cent that their charity did not yet have a working party to consider the issue.

Anonymous quotes in the Carnegie report paint a picture of a sector in denial, with one charity chairman saying they would not touch the issue "with a bargepole" and another simply describing the subject as "toxic".

The report says charities might be reluctant to engage with the issue for fear of becoming involved in the political debate about whether or not independence would be a good thing. "People are keeping their heads below the parapet ... There's a concern that, by raising this issue, we might get painted into a corner," said one respondent.

Charities might be more forthcoming after the Scottish government's White Paper about the referendum comes out in November. But the Carnegie report's authors conclude that now is the time for charities to start exploring how the issue will affect them.

"Under different constitutional arrangements, everything from budgetary choice by government to entity regulation could be subject to change, or at least review, and that range of choices merits attention by charity boards," writes Professor Richard Kerley, lead author of the report.

A similar hesitation to engage with the question is evident south of the border: several charities asked by Third Sector about their plans say independence is not yet on their radar. The British Heart Foundation, for example, says the issue is "many years away" and "not a priority".

But some, such as the Brain Tumour Charity, are already alive to the issue. "We have to present a case to Scottish supporters, and one way of doing that is to create a web page for the Scottish side of our operations," a spokesman for the charity says.

Kidney Research UK is also considering changes, and says the prospect of independence is a challenge for all charities that operate across all of the UK. "As well as fundraising in Scotland and operating several retail outlets there, we fund a significant amount of research at Scottish centres of excellence," says Peter Storey, director of marketing at the charity. "In the event of an independent Scotland, the challenge for us will be to communicate the importance of this work directly to Scottish supporters. We would need to consider a change to our brand and there would be additional costs associated with this."

Girlguiding, known as Girlguiding UK until two weeks ago, recently rebranded with the issue of political changes and their possible effects on fundraising in mind. It carried out a fundraising study and found that many of its regional offices were struggling with funding applications because of having 'UK' in the title, and asked for it to be dropped.

"These changes make us fit for purpose and future-proofed to any potential changes in the political and financial landscape of the UK, including Scottish independence," says Donna Holland, head of marketing at Girlguiding.

The Scottish Council for Voluntary Organisations says the issue for Scottish charities might be not whether donations suffer, but whether they have to spend more money to do the same thing as before.

The Institute of Fundraising Scotland is also conducting research among Scottish charities, due to be published at the end of March, which might shed more light on the sector's readiness to cope with the possible effects of independence.

"Very few members have begun any formal work on assessing the possible impacts on fundraising, and there is a widespread desire for more information on what independence would look like,"

says Gregor McNie, Scotland manager of the IoF. "What is certain is the uncertainty."

Another key problem to be addressed in the event of independence for Scotland is that of branding in an environment where the UK no longer exists, at least as currently understood, and the word 'British' might be perceived by some people as excluding Scotland.

Branding experts have differing views about what the key problems might be for UK-wide charities. "If we lose the St Andrew's cross from the Union flag, that could have implications for any third sector organisations that use the flag in their identities," says Neil Smith, co-founder of the consultancy Howdy!

Another consultant, Max Du Bois, thinks there are bigger issues facing charities: "But they will see it as a pain to be endured if they have to bear the cost of dropping 'UK' from their titles."

The Royal National Lifeboat Institution has a long history of working in Ireland as well as the UK and has transcended any problems associated with having the word 'Royal' in its title. It says it will continue to offer a joined-up search-and-rescue service if Scotland becomes independent. 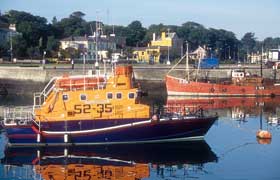 "The charity has been in Ireland since 1824," says Niamh Stephenson, public relations officer, Ireland, for the RNLI. " When independence came, the coastguard left, but the Irish government asked the RNLI to stay on.

"The volunteers are trained in saving lives, whichever coast they are working from - so when our donors give to us, they know the money will be used to save lives at sea.

"Many people who give to us do so for personal reasons. We have stations all over Ireland and we've always viewed the country as one division. We're apolitical, and people here are proud of their lifeboat crews - because they save lives."