Despite government pressure on councils to avoid 'easy' cuts, voluntary sector budgets have been slashed by nearly a fifth in the coming financial year, a Third Sector survey indicates. John Plummer interprets the figures

In September last year, the Prime Minister, David Cameron, urged local authorities not to do the "easy thing" and cut voluntary sector funding in 2011/12. Other ministers echoed his plea, saying a strong voluntary sector was necessary for the big society.

Eric Pickles, the communities secretary, increased the pressure at the start of this month by saying he would consider using "statutory force" against councils that made "disproportionate" cuts to sector budgets.

But with the financial year ending next week, a Third Sector survey of local authorities suggests that the message might have gone largely unheeded: the amount allocated to specific voluntary sector budgets by councils that responded has gone down by 19 per cent (see table and case studies, below).

This can be regarded only as an indication because, in many cases, it is not possible at this stage of the financial year to give a comprehensive account of a council’s spending on the voluntary sector for the year 2011/12. Some of that spending will come in the form of contracts from individual departments that might not yet have been awarded.

But many councils have specific voluntary sector budgets, used mainly for grants, that have already been decided. Thirty-four of the 69 councils we contacted in England and Wales were able to give figures for such budgets, which are reproduced in the table (opposite) with figures for the previous year. If they also award or extend contracts in due course, their total sector spending will grow.

Many other councils said they did not have, or no longer had, voluntary sector budgets as such, but pointed out that their spending on the sector might still be considerable once contracts have been awarded or extended by individual council departments later in the year. These councils have been omitted from the table.

Of the 34 that gave their voluntary sector budgets, only four said funding had gone up. Twenty said it had gone down and 10 said it had stayed the same.

Many big northern cities have been badly hit. The voluntary sector budgets of city councils in Liverpool, Manchester, Leeds and Sheffield have fallen by a combined £43.9m. The few councils that have pledged increases are adding comparatively small amounts.

Some, however, have announced other methods of support: Wirral Borough Council, for instance, is establishing a big society unit to "involve voluntary organisations more". Bolton, which this year decided to discontinue all grants in favour of commissioning, has created a £150,000 transition fund for organisations facing funding cuts. Reading says cuts to its grants budgets are more than offset by increased sector commissioning overall.

They are also critical of Pickles’ intervention. "It is not up to central government to tell councils what to do," says James Hulme, head of the LGFU. "That seems the absolute reverse of localism."

But voluntary sector organisations think the steep budget cuts increase pressure on Pickles to act. Neil Cleeveley, director of policy and communications at infrastructure organisation Navca, says: "He needs to act now, otherwise it will be too late to save many local charities." 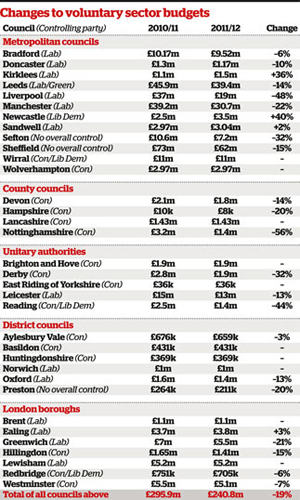 Newcastle City Council is increasing its funding to charities despite making overall cuts of £45m. The Newcastle Fund, which has been set up to channel grant funding to not-for-profit organisations, will distribute £3.5m in 2011/12 and will be worth £10m over four years. The council awarded grants worth £2.5m in the year just ending.

Andrew Lewis, director of policy at the Lib Dem-controlled council, says the level of voluntary sector support will actually double because some organisations that previously received grants are now getting contracts. He says the local authority is commissioning more services, but grants still have a place. "They can help to build resilient communities, which is important in a city like Newcastle," he says.

The council’s actions prove cuts are not inevitable, he adds.

"A council that has had one of the toughest settlements from the Communities and Local Government department is making a commitment to a whole suite of voluntary organisations for three years that gives them a degree of stability," Lewis says.

Newcastle’s voluntary sector employs 7,000 people and generates £70m. "It’s at these times of stress that you have to reinforce relationships," he says.

Few places have experienced more voluntary sector turbulence than Liverpool over the past few months.

The city council leader, Joe Anderson, wrote to the Prime Minister in February, reversing its decision to be a big society vanguard area.

This month, the Labour-controlled council imposed new restrictions on street fundraisers and announced a voluntary sector funding cut of £18m, or 48 per cent. Its overall budget was cut by £91m, or 22 per cent.

With nobody available for interview at the council, it says in a statement: "We have tried to shield those who provide services for the most vulnerable and are looking at ways of levering in additional financial support from elsewhere to support some of the organisations. We are still spending significant sums on the voluntary sector – about £19m a year."

A spokesman for the Local Government Association says the reason many city councils in deprived areas are cutting voluntary sector budgets deeply is that they have lost funding from central government programmes that are often distributed to charities, such as the Working Neighbourhoods Fund and Supporting People, as well as suffering budget cuts from central government.