Analysis: the sector divided on the fall in individual giving

Richard Harrison, head of research at the Charities Aid Foundation, says he is confident the figures in the latest UK giving survey are accurate

Last week, the National Council for Voluntary Organisations and the Charities Aid Foundation published UK Giving 2012, which suggested that donations to charities had fallen by 20 per cent in a year - a fall in real terms of £2.3bn.

The fundraising community has reacted with deep suspicion to the survey. Stephen Pidgeon, a trustee of the Institute of Fundraising, calls it a "pile of poo" and has said the two agencies should apologise if proved wrong; Peter Lewis, chief executive of the institute, says the findings do not match the experience of his members. "This is only a survey of what people say they have given," says Lewis. "It creates difficulties for our members when there are headlines like this."

But Karl Wilding, director of policy and research at the NCVO, insists the findings are accurate. "There is a 3 per cent margin of error, within a 95 per cent degree of certainty," he says. "For a survey of this kind, that's extremely good."

His confidence in his methodology appears well-founded: the survey has a very large sample size compared with most, and the people questioned are highly representative of the UK as a whole. It was conducted by the well-respected Office for National Statistics and has been repeated, using the same system, for eight years.

"We're really, really confident that we've got this right," says Richard Harrison, head of research at CAF. "When we first saw the numbers we thought they were extraordinary. But it's only the same as the drop in petrol consumption or some types of tourism. We have to remember that we are in relatively uncharted waters."

He is supported by the timing of the report - the survey was conducted between the two low points of the double-dip recession - and by the high level of inflation, which turned a 15 per cent fall in giving in absolute terms into a 20 per cent drop in real terms. Fundraising, he says, performs poorly in highly inflationary periods because donors are slow to update the value of their direct debits.

Wilding observes that giving is a "lag indicator" - one of the last things people tend to give up when they are tightening their belts; so it is possible that people are only now reducing donations to reflect reductions in their incomes two or three years ago. 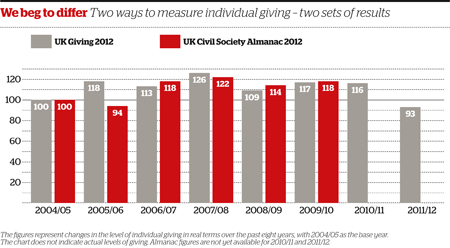 UK Giving has been fairly accurate as a predictor of trends later visible in the NCVO's UK Civil Society Almanac and other research based on charity accounts. But there is a tendency for it to produce wider swings than other data. In 2005/06, the figures predicted an 18 per cent rise in giving in real terms. The almanac suggests it fell by 6 per cent. And in 2008/09, the figures predicted a 13.5 per cent fall in giving. The almanac showed a drop of 6.5 per cent.

Cathy Pharoah, professor of charity funding at Cass Business School, analysed fundraising data from the largest charities in 2008/09 and found a smaller fall of 3.3 per cent. HM Revenue & Customs figures for that year suggest a 1.5 per cent dip in Gift Aid claims, which closely reflect fundraising trends. "No previous recession shows a fall as large as the one indicated in this latest research," Pharoah says. "Nor does US data mirror the trends it shows."

She says the survey has limitations. "They asked 3,000 people, but not all of them are actually donors," she says. "Samples are usually highly skewed by a small number of generous people. So the mean donation can be heavily affected by a minority." Nor, she says, does the sample capture high net worth individuals - only the general public.

Fundraisers say the fall does not tally with their experience in the field. But they admit that fundraising has become more difficult: IoF data published in April showed that 93 per cent believed it had become harder to fundraise in the previous year, and 94 per cent said they expected the current year to be worse still.

For Pharoah, the most likely scenario is that the report has identified a substantial drop in donations, but nothing like 20 per cent. "I'd expect they've correctly identified the trend, but not necessarily the level of change," she says.