Analysis: Serco and the sector - 'We share the blood, sweat and tears'

Serco says charities should be grateful for the work it does with the sector, but some of them are sceptical about the growing role of the giant services company. Andy Hillier reports

Just saying Serco's name is enough to send some people in the voluntary sector into a rage. For some, the giant services company embodies everything that is wrong in the new age of contracting, in which charities find themselves competing against the financial might of big companies or becoming subcontractors in a supply chain.

Serco's growing involvement with the voluntary sector runs deep. It is a prime contractor for the government's Work Programme, subcontracting to 34 organisations, of which 15 are in the third sector. It runs six prisons in the UK and commissions work from a range of voluntary sector providers, including the national charities Catch22 and Turning Point.

In September, the Cabinet Office also awarded the NCS Network, a Serco-led consortium, the largest number of regional contracts to deliver the National Citizen Service programme in 2013 and 2014. Serco will work alongside Catch22 and the youth charities the National Youth Agency, vinspired and UK Youth to deliver six of the 19 regional contracts to send 16 and 17-year-olds on an eight-week programme that involves living away from home and volunteering. 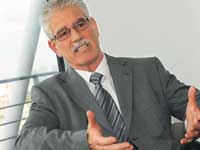 Gareth Matthews (right), business director for Serco's welfare services, believes that, rather than loathing the company, charities should be grateful for its presence in the social welfare market. He points out that it created the "integrator model" of commissioning, where a large organisation works as a prime contractor, then subcontracts work to smaller organisations in a supply chain.

"When we came into the welfare services market in 2008, we did it in a transformational way," says Matthews. "At that time the majority of delivery was almost exclusively about self-management and self-delivery, but we didn't do that. We created a model where we work as prime contractor and deliver through a network of suppliers."

Since then, the government has adopted this supply chain model for the Work Programme and extended it to other contracts. As a result, Matthews says, many opportunities have been created for third sector suppliers. 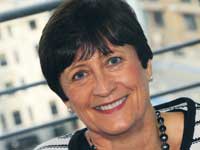 "The government wants parent company guarantees and huge amounts of liability - not all of which can be covered by insurance - which is way out of the league of small organisations," she says. She believes that government favours awarding large contracts to big private sector providers partly "because they can beat us around more than they could a small organisation".

But the supply chain model has been fraught with problems, especially in the Work Programme. Some small organisations have complained about prime contractors delaying payments and passing on the hardest clients to them.

Matthews says Serco takes its role of prime contractor seriously. "Before an organisation contracts with us, we do an awful lot of due diligence," he says. "We try to understand what they can offer and add to the contract delivery. If you look at why some organisations are leaving the Work Programme, one of the reasons most often cited is that the proper due diligence has not been done." Bailey adds that Serco tries to agree a pay mechanism with subcontractors that "smoothes their cash flow and keeps them on a stable footing".

The National Council for Voluntary Organisations and the local infrastructure body Navca have accused private sector organisations of treating charities as "bid candy" - using them to enhance social or political credibility in order to secure contracts. But Bailey says she's incensed by this accusation. "The third sector is not bid candy to us," she says. "We don't do things in an ivory tower with the third sector somewhere in the distance. We're in this together. We do the blood, sweat and tears of the bid together."

Matthews points out that charities aren't always the most reliable of partners. One charity subcontractor, which he declines to name, recently pulled out of delivering its Work Programme, he says, because it won other contracts in another area of its work. Its exit has cost Serco "a considerable amount" of money because it has had to transfer its clients to another provider. "We've accommodated that and most of the cost has been borne by us," says Matthews. "I don't fault the charity's logic for doing what it has done and we wish it well."

He says that another third sector organisation is going to pull out of the Work Programme because it is going through a merger; again, he says, the organisation's withdrawal will cost Serco money, but they will arrive at "an amenable solution".

Overall, Matthews believes that the benefits of working with the third sector outweigh the risks. "The third sector is very innovative," he says. "To be honest, I could spend a decade building up that experience in-house. By and large, I just capitalise on it and it delivers fantastic results."

But does the third sector really need to work with the likes of Serco? In the case of the NCS Network, for example, the charity partners already have solid track records of delivering sizeable government contracts.

Bailey believes that size is the main issue. "The government says that it wants to scale this up really fast," she says. "But organisations such as Catch22 say that they cannot scale up that fast without help."

She says that one of Serco's roles in the NCS is to negotiate the rates for residential accommodation for participating young people. "It's more efficient for one organisation to do it on behalf of the others," she says. "And we'll have greater purchasing power if we buy the accommodation as one lot."

Matthews adds that the types of contract it bids for are generally beyond the reach of even the largest third sector organisations. "The fact that we are looking at opportunities and successfully acquiring them is positive for the third sector. It's a way of protecting it as contracts become bigger."

Bailey denies that Serco puts profits first. "It's important to us that the users of our service get the best service they can," she says. "I would prefer people not to have to go to prison. But if they have to, I'd rather that they were looked after in one of our prisons because there is respect and dignity, and our staff care about them.

A charity that does not want to be identified is having problems with the contract that Serco is offering it to carry out part of the government's National Citizen Service youth programme. The charity was a subcontractor with another prime contractor last year and received £1,300 per place to cover all costs for the duration of the programme. But this year it is being offered only about £980 per place. "This is a huge reduction for a small organisation such as ours," says a spokeswoman. "If we deliver the programme, we will get tens of thousands of pounds less than last year."

The Cabinet Office says subcontractors will receive less this year because they won't be responsible for recruiting young people and will be doing less work. But the charity believes Serco's involvement in the NCS just takes money away from hard-pressed charities that could run the scheme on their own. "The only thing Serco seems to be doing is helping with recruitment," she says. "I fail to see how a four-person Serco team, working across a whole region, will make a difference to recruitment here. The national marketing campaigns Serco plans will not engage young people living in temporary accommodation, young carers or young people with disabilities."

A spokesman for Serco said: "We do believe that we are bringing value for money to this contract. We are also working through a network of voluntary sector organisations that are skilled in this area."

Carolyn Coxon, development manager for the charity, says it worked well. "It was the first time that we had worked in a prison," she says. "We were pleasantly surprised about how the project went."

She says that funding for the eight-month programme came through on time and Serco was amenable. There were a few minor problems, such as changes of session times at short notice by the prison and the fact that another provider was delivering a similar project at the same time. But there was nothing of major concern, Coxon says: "Serco told us that it was happy with our work and wanted to work with us again. We're hoping that we'll work with it again in the future."

The many arms of an outsourcing giant

Serco has become a behemoth of public service outsourcing in recent years and now manages an unusual array of contracts worldwide. Although it had an operating profit of £266m in 2011 and employed about 100,000 people in 30 countries, it keeps a low profile and is sometimes billed as "the biggest company you've never heard of".

It was founded in 1929 as the UK division of the Radio Corporation of America and initially provided services to the cinema industry. But in the early 1960s it won a maintenance contract for the UK Ballistic Missile Early Warning System at the Royal Air Force base in Fylingdales, North Yorkshire, which led to its involvement in the public sector.

In the 1970s it moved into the space industry, providing technical support to the European Space Agency, and in 1982 it was awarded a contract to maintain London's traffic signals. After a management buyout in 1987, RCA Services was renamed Serco and in 1988 it was listed on the London Stock Exchange as the Serco Group. During the late 1980s and 1990s it expanded rapidly, winning a range of contracts in areas such as transport and local government.

In the UK, it currently operates the Docklands Light Railway in London, runs six prisons, has maintenance contracts at military air bases including RAF Brize Norton, and runs cleaning and facilities contracts at hospitals including Norfolk and Norwich University Hospital. Overseas, it manages immigration applications on behalf on the US government, provides support to the Australian military and operates Dubai's driverless metro system.