Social impact bonds are being promoted as a new way to fund charities to tackle social problems. David Ainsworth examines how they work, how they will measure results and whether they will eventually be attractive to commercial investors

When the government announced a second round of social impact bonds in August, Nick Hurd, the Minister for Civil Society, made it clear there was strong political backing for this new method of financing charities and for the voluntary sector to tackle crime and disadvantage. "We must not be afraid to do things differently," he said. "Social impact bonds could open serious resources to tackle social problems in innovative ways."

If the pilots work and the bonds take off, they will potentially bring a profound change in the way some charity and voluntary sector projects are financed: investors, rather then the government, will provide the finance, and will receive a dividend from public funds if the projects achieve a pre-defined and measurable level of success (see diagram below).

First reports are encouraging, but it is clear that social impact bonds have a long way to go to become common currency. The biggest questions they face are about the measurement of results and their attractiveness to commercial investors.

The metrics for measuring results in Peterborough are relatively simple: investors will get their money back if the project reduces offences committed by the target group by 7.5 per cent. If the reduction is more than that, returns rise proportionately, but are capped at 13 per cent a year. If reoffending falls by less than 7.5 per cent, investors will not get their money back.

The new bond for projects with problem families is likely to be more complex. The consultants A4e Insight have been hired by the Office for Civil Society to develop the metrics and will produce an initial report by Christmas. Edward Hickman, director of the firm, says that before any project can go ahead, it must be able to quantify a way of improving families' lives and the improvement must generate sufficient savings for the local authority. Those savings must also be "cashable", he said - capable of being turned into hard cash that will be used to pay back investors.

Andy Robinson, assistant chief executive of Leicestershire County Council, one of the local authorities involved, says there are likely to be a number of metrics. "There are a range of outcomes that might benefit the council," he says. "They might include a reduction in police visits, a decrease in eviction rates, or a rise in school attendance."

It remains to be seen who will invest in the second scheme, but the 17 investors in the Peterborough project include private philanthropists and charitable trusts, including Panahpur, Barrow Cadbury Trust, Esmee Fairbairn Foundation, Friends Provident Foundation, Tudor Trust and the Henry Smith Charity. There are no private investors.

Toby Eccles, development director of Social Finance, the main pioneer of the bonds, says that they will need to attract commercial capital if they are to be successful in the long term. But it will take years, he says, before they appeal to institutional investors, who have strict rules about how they invest their clients' capital.

Andrew Hunter Johnson, head of charities at the investment house BlackRock, agrees it will be many years before institutional investors join in. The projected 13 per cent annual return provided by the Peterborough bond is better than stocks and shares, he says, but it lacks many characteristics needed to make it a good investment prospect.

"It lacks liquidity," he says. "Once you've bought it, you're stuck with it for years. You can't sell it if you need your money back or you change your mind. It has no track record, so you don't know the risk to your money. And it's too small scale. It would probably need to be worth £100m at least before we would look at it."

As an investor, he says, he would also want some control over how the project was run. "Otherwise, what's to stop the charities involved just saying 'sorry' and doing something else?" he says. "What's to stop their best people leaving?" 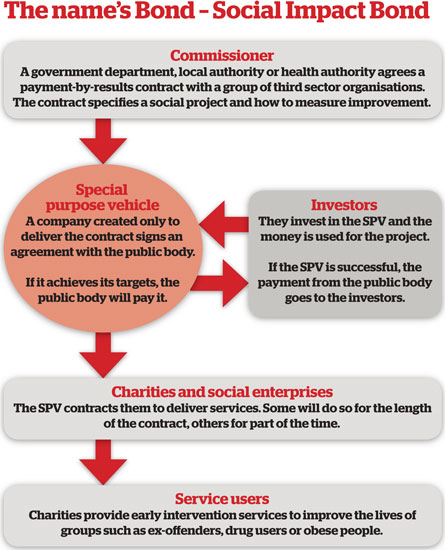 THE DEBATE: A SMART PROPOSITION - OR JUST WRONG IN PRINCIPLE? 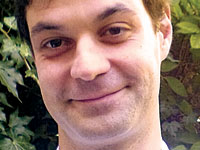 THE EASY WINS AND THE INTERESTS OF THE HARDEST-TO-REACH

Eccles says the Peterborough pilot bond focuses on the hardest-to-reach, and that other projects will need similarly rigorous metrics, he says. "We focus on how often people reoffend, rather than whether they reoffend," he says. "If we'd based it on whether you reoffended, the incentive would have been to stop working with you as soon as you did anything wrong." For example, a bigger return is earned for someone who committed 10 offences last year and only commits two this year than for someone who committed two last year and none this year.

THE TENSION BETWEEN CHARITABLE WORK AND PRIVATE PROFIT

The need for private finance flows from the need for charities to win government contracts, says Eccles. "If you take a government contract it's inevitable that you will be asked to measure something," he says. "The sector wants the government to procure according to outcomes and impact, which are hard to measure, rather than outputs and inputs, which are much easier. If we want procurement according to outcomes, it will take years to measure. This means a cash-flow problem. The social impact bond is a way to solve that problem."

DOES PRIVATE MONEY COST MORE IN THE END?

Eccles believes it will be difficult to persuade the government to fund more early intervention work directly. "The government is very risk-averse," he says. "Trying something new over a long period is a dangerous thing for it, because it's difficult to justify if it doesn't work." The social impact bond, he says, allows that risk to be taken neither by charities nor government, but by people who have money. "We think something like a social impact bond should be used for a risky proposition with no track record, in order to help develop a track record," he says. 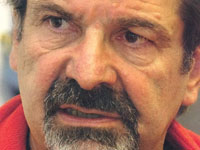 THE EASY WINS AND THE INTERESTS OF THE HARDEST-TO-REACH

Any system for measuring success works in favour of easy wins, says Demarco. "Behind any social impact bond are money men who want a return," he says. "They will look around and say 'who's going to give me that return?' And that's just not the way a charity or social enterprise should be run." People don't fit into neat categories, he says, and some need more help than others.

THE TENSION BETWEEN CHARITABLE WORK AND PRIVATE PROFIT

The moment you procure for profit, says Demarco, you lose the connection between providers and beneficiaries. "I object in principle to the idea that helping poor people is a dividend-based activity," he says. "This is a value-based sector we work in, and when I hire someone for community work I want to look into their eyes and see that they're doing it because they want to help people. If you do this work for profit, instead of because of your morals, you lose the connection you need to do it successfully."

DOES PRIVATE MONEY COST MORE IN THE END?

Demarco says social impact bonds are aptly compared to the private finance initiative, which attracted private finance to public schemes such as building hospitals, but also meant high repayments. "Social impact bond contracts are complicated," he says. "And because they involve all sorts of consultants and money men, they're expensive. It would be much cheaper if the government could fund this itself. It still safeguards its money, but rather than strict targets, you have a case worker who meets you regularly, and you talk about whether you're achieving your objectives."