Analysis: Student unions - a 'college' for board members

The requirement for student unions to register with the Charity Commission has caused controversy, but some say it will create a body of 'oven-ready' trustees. Mathew Little reports

They comprise more than 100 charities, have a combined turnover of about £250m a year and represent some seven million people, but few people would even realise that many student unions are charities.

There is a reason for this lack of awareness. Before the Charities Act 2006, student unions were exempt charities, regulated only by their parent universities. The act required student unions with incomes of more than £100,000 to register with the Charity Commission. Portsmouth University Union became the first to gain charitable status in June 2010, but since then 130 have registered. Ten still haven't, but will have charity numbers soon.

The unions provide a range of services for students, from bars and cafes to sports clubs, advice services and nurseries. Matt Hyde, chief executive of the National Union of Students, says they deserve their place on the register of charities. "Student unions are a key part of the voluntary and community sector but often aren't recognised as such," he says.

The received wisdom of a student union is as somewhere to go to the bar, Hyde says, but that fails to take into account the charitable work done by many student unions. Rag collections raise £7.5m a year, 400,000 students volunteer annually and 500 young people a year become trustees - a fifth of whom, according to NUS research, are keen to take on similar roles in the wider charity sector. "Using that human capital and the resources of student unions is a massive opportunity for other charities," says Hyde. "We are ambitious about our impact on wider society, not just on education."

Rosamund McCarthy, a partner at the law firm Bates Wells & Braithwaite, which advises several student unions, also welcomes their inclusion on the register. "It's a tremendous benefit to the sector to have the insight and enthusiasm of students and all the things they get involved in, whether it's volunteering, fundraising or activism," she says. "It breathes new life into the sector and revitalises it."

But the story of the charitable registration of student unions also reflects long-running sector debates about democracy and how far charities should be beneficiary-led.

Student unions have traditionally been exemplars of democratic practice. They have been governed by a combination of an elected executive of student officers and elected union councils. Sometimes, a general assembly open to all students has been added to the mix. Hyde admits that this ambiguity had to be clarified. "Having a clearly defined trustee board was a requirement of registration, and that was the main challenge," he says. "Previously it was implicit that the executive committee of union council was the trustee board."

But many student unions also realised that their governance structures needed modernising. Unions employ 3,500 careers advice staff and 20,000 students. "Arguably, the system wasn't robust because you had people in the early parts of their careers scrutinising the work of the very experienced senior management team," says Hyde. Hyde himself is an employee of the National Union of Students - which, in common with its member student unions, has an elected president.

To comply with Charity Commission regulations, many student unions created trustee boards comprising elected student officers, a president, a welfare officer and, for the first time, coopted students and older 'lay' trustees, many of whom have been chosen for their expertise in, say, law or accountancy. Some unions, including the London School of Economics Students' Union, will allow only students to become trustees.

Hyde says the move to boards of trustees has proved controversial, leading to some resistance, anxiety and hostility. "The notion of a mutual body - students electing people to run the organisation - has been entrenched for years," he says.

But Sam Budd, chief executive of Bristol University Union, believes the new trustee structure has brought benefits. "The nature of the student union is that there is a lot of churn: every year you have new officers and new students," he says. "One role of the trustee board is to hold the organisational memory and think about the future. There is a sense with external trustees that you have that kind of stability. You also bring in the expertise you might lack because of the nature of the membership of the student union."

So most student unions that are registered as charities operate a dual structure. The trustee board deals with what McCarthy calls "the boring stuff" - finances, pensions, relations with the university, the business plan and providing public benefit. The executive committee and union council concerns itself with policy and campaigning. That might be on a micro level - campaigning, for example, to lengthen university library opening hours - or more visible, national campaigning. Many student unions will also form part of the national NUS demonstration in London in November against fees and education cuts. "I don't think these changes have dulled the campaigning zeal or activism of student unions," says McCarthy.

Some charities, including the RNIB and Diabetes UK, have experimented with governance structures that allow the experiences and wishes of beneficiaries to be heard while ensuring the charity does not become controlled by them. Some establish beneficiary councils below the trustee board. Hyde believes student unions offer an example of beneficiary-led governance that works and can influence the wider charity sector. "There is something about the power of mutual, cooperative, democratic endeavour that is part of our DNA," he says. "It's particularly relevant at a time when people are asking 'how do you really empower your beneficiaries? How do you keep in touch with your members? And how do you get democratic participation?'"

But one area where student unions can make a tangible difference to the charity sector at once is in the realm of trustees. According to the Charity Commission, the average age of charity trustees is 57. Student unions, by contrast, have 800 young trustees, the vast majority under 25. Elected student officers, such as the union president, automatically become trustees. The NUS runs a 'trustees academy' to train them; they serve for one year, possibly two if they are re-elected. Then they pursue their lives and careers beyond university. About 500 of them leave their posts each year. An NUS survey carried out last year found that 20 per cent were interested in becoming charity trustees.

Hyde says: "There is a real responsibility on the third sector to diversify the people who make decisions in charities. We have these 'oven-ready' trustees, about 500 a year and probably under the age of 25. That's a real source of diverse talent that I think is a massive opportunity for the sector." 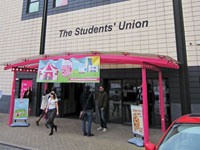 The Huddersfield University Students' Union has a membership of 20,000 and registered as a charity in August 2010. Matt Mills, its chief executive, says: "The process was straightforward. We had been anticipating it for some time and had started the process of establishing external trustees before the registration deadline."

Before 2007, the union was governed by an executive council consisting of five elected student officers, the union president and four other sabbatical officers. From 2007/08, the union began to recruit external trustees to ensure the majority of its new trustee board were not paid. The 10-strong board now consists of five elected student offices and five external 'lay' trustees. The external trustees include senior Huddersfield University academics, an IT consultant, a theatre manager and a retired HR consultant who acts as chair. "I feel most accountability lies in those trustees meetings, when professional, external trustees ask difficult questions," says Mills.

The union has retained an executive committee, elected student council, student forums and referenda. The student body recently voted, by a 75 per cent majority, in favour of taking part in the NUS national anti-fees demonstration in November. Mills says charitable registration has attracted talented staff and enabled it to benefit from charity discounts with suppliers.