Text donation campaigns raised £32.7m in 2011, but are predicted to bring in as much as £150m next year. Ian Griggs assesses the potential of a growing method of fundraising

A soldier shot my father, then he tortured my mother and then he married me ..." These hard-hitting words featured in a recent text donation campaign for the charity War Child that ran on underground and overground trains in London and south-east England.

Campaigns that ask members of the public to text donations of relatively small amounts have become an increasingly regular sight. In fact, it's not usual for text-to-donate adverts for several different charities to be displayed in a single carriage on busy commuter routes.

Text donation campaigns have been used for at least a decade, but the creation four years ago of VAT-free special short codes beginning with the number 7 has led to an increase in the number of charities using them. According to a report produced by the research firm ThinkTank for the premium-rate services regulator PhonepayPlus, text donation campaigns raised £32.7m in 2011, but are projected to raise £150m in 2015.

Exterion Media, which manages the advertising space for Transport for London, says 458 charities advertised with it in 2013, compared with 299 in 2011. So far this year, 271 charities have advertised on TfL's network.

Some mobile phone operators, such as Vodafone, waive network fees for text donations beginning with the number 7, and most networks pass on 100 per cent of the donation to the charity or company acting on its behalf.

Vir2, a company that specialises in collecting text donations on behalf of charities, charges its customers about £430 a year for three keywords - the words used when someone sends a donation by text - and £10 a month for each additional keyword. There is also a charge of a few pence a month per donor to send a regulatory message that advises people how they can stop sending regular donations.

Text-to-donate campaigns are not necessarily a cheap alternative to other fundraising methods such as face-to-face fundraising. Once production costs are taken into account, it can cost £9 to display a poster on an overground train for four weeks, and charities will usually need to run several thousand posters to make the campaign viable. One charity, which asked to remain anonymous, tells Third Sector it spent almost £30,000 on one overground advertising campaign - and that did not include any costs for the creative work or hiring a call centre to convert one-off donors into regular givers.

Research carried out for PhonepayPlus suggests it's only the bigger charities that are able to run such campaigns successfully. In its 2012 report, Charitable Donations by Premium-Rate, it quotes the concerns of a number of unidentified small charities about running text-to-donate campaigns. One said: "We know it's great, but we don't have the resources to take full advantage of it." Another said it took 18 months to call some donors back because of its limited staff resources. It said: "If we did this sooner, we would have had a much better take-up, I'm sure."

Stephen Pidgeon, a fundraising consultant and a trustee of the Institute of Fundraising, believes that charities are increasingly using text donation campaigns because they open up the possibility of a two-way conversation with donors. "The value is not the monetary value of the initial small gift, but the indication that the supporter is interested in the cause," he says. "The value comes with the subsequent call and conversion to a regular monthly gift. Conversion rates vary hugely, but they regularly reach high single figures, which makes it an effective form of donor recruitment."

Adrian Sargeant, professor of fundraising at the Centre for Sustainable Philanthropy at Plymouth University, says conversion rates can be as high as 20 per cent, which he says is significant when a monthly donor can be worth up to £700 over the lifetime of their relationship with a charity. "For many charities, the conversion rate isn't small," he says. "It is pretty significant, and we shouldn't be surprised by that because by sending in a text you're in effect putting up your hand and saying 'yes, I'm genuinely interested in the work that you're doing'."

Sargeant says text donation campaigns can draw in younger donors who might not have given to charity before. PhonepayPlus's 2012 report argues that such campaigns elicit a swift emotional response and give donors the psychological reward of instantly having done something to help. They also use technology that the younger generation typically has to hand.

This could become important. A report from the Commission on the Voluntary Sector and Ageing, published earlier this month, found that, of £8.4bn donated by adults in 2011/12, more than half came from people over 60.

So does this mean that text donations could eventually supersede more traditional fundraising methods? Pidgeon doesn't think so. He says: "Nothing supersedes another method; it simply adds to it - everything waxes and wanes in effectiveness."

But he does worry that the plethora of text-to-donate campaigns on public transport and billboards will make the public blind to them. Pidgeon says: "Over-saturation is already happening. Early users have cashed in and later entrants might struggle."

Sargeant thinks over-saturation is unlikely, however, arguing that this will become a problem only if a donor is, for example, confronted by an underground carriage full of posters for different charities working in similar cause areas. "Donors won't give to a charity they're not interested in and they will focus only on messages they personally find compelling," says Sargeant. "Charities will be testing all the time, and if an advert doesn't work or cannibalises other channels they will drop it very quickly."

The Mobile Data Association, a membership body for mobile network operators and manufacturers, says the increased use of these campaigns is testament to their success. Roger Craven, director of the MDA, says: "In time, media agencies and their charity clients will get more savvy about buying the media, and good fundraisers will always rise above the noise by creating campaigns that resonate with the public."

Pidgeon believes text-to-donate campaigns are still in their infancy and future charity campaigns will offer something for nothing as a means of making first contact with potential donors. For example, a cancer charity might offer a free guide on breast cancer if a potential supporter texts the word "guide". The charity will then ask the person for their name and address: it then has the name, address and phone number of a potential supporter.

Pidgeon says: "This is the sort of thing that will dominate the donor recruitment market in the next few years."

The children's charity ran a campaign at Christmas that combined text-to-donate posters on the London Underground and on trains with television advertising. The campaign ran for six weeks and resulted in 24,000 text messages, raising more than £96,000 in one-off donations and an estimated £80,000 in regular donations over this year. This surpassed the charity's targets of 19,000 texts, £76,000 in one-off donations and £56,000 in regular gifts. The charity asked for £4 from text donors and received a minimum of £3.97 per message, depending on the phone network used. It declines to say what its costs were. 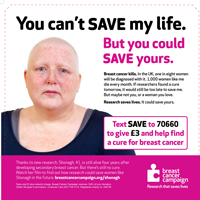 The cancer charity launched its first text-to-donate campaign in March, using 4,000 posters and asking for donations of £3. The charity declines to say how much money the campaign generated, but says it achieved its target for one-off text donations and hopes to convert some donors into regular supporters. It also declines to say what its costs were, but estimates that its return on investment over a five-year period was likely to be similar to that of running a face-to-face or direct mail campaign.

The mental health charity ran a text-to-donate campaign on trains for six weeks from late February, then put posters in the windows of its charity shops. It says it ran the campaign to find out how useful the method was. It declines to reveal income or costs, but says the campaign cost more per donor acquired than direct mail or telephone campaigns because of advertising costs. "Early feedback has shown zero attrition in the second month," says Ed Veasy, Mind's senior direct marketing officer. "The real mark of success will be how many people move from giving £3 a month to greater amounts."

eing asked to text or email the armed forces charity SSAFA to obtain a free guide to First World War medals that has been produced to coincide with the centenary of the outbreak of the war.

The "value exchange" campaign runs from this week until the end of August and will initially be promoted by an email campaign. After that, there will be advertising on underground and overground trains.

People who are sent the guide will later be contacted about becoming donors. The charity expects to reach people aged over 50 with a connection to the armed forces or an interest in military history. It is the first time the charity has used this method and it will be monitoring responses to decide whether it works or not.

The charity says it will measure the success of the campaign by the number of donors it recruits, levels of donor retention and whether it has reduced the costs of contacting potential donors. A spokeswoman says: "This is a test campaign. It is also an opportunity to engage a new audience that we wouldn't be able to reach with traditional fundraising methods such as direct mail."

Two years ago, the research company ThinkTank produced the report Charitable Donations by Premium-Rate on behalf of the premium-rate services regulator PhonepayPlus.

It showed that donations made by text were worth £15m to charities in 2010, but that figure was projected to increase tenfold to £150m by 2015.

However, the giving method was dwarfed by most other major methods of donating. During the same five-year period, giving by direct debit - the single biggest method - was due to rise from £2.3bn to just over £4bn. But the report predicted that text giving would be worth a similar amount to payroll giving by 2015.

Charitable donations made by cheque were projected to fall significantly, from about £3bn in 2010 to £2.1bn in 2015.

The predictions were based on data from a variety of sources. These included information showing historical trends in giving from the Charities Aid Foundation, PhonepayPlus data, projections for text giving from individual charities and research into historic campaigns and trends in text-giving methods.