Unicef UK experienced the kind of media attention no charity wants to attract after three of its most senior people departed in quick succession amid a top-level bullying row in September. The story has reignited conversations about relationships at the tops of charities, with experts stressing it is crucial to maintain healthy relationships between chairs and their chief executives.

Third Sector revealed that Sacha Deshmukh, the charity’s executive director since April, had had his resignation accepted by the board after he made allegations of bullying behaviour against Douglas Alexander, the charity’s chair.

Deshmukh is understood to be one of about 10 Unicef UK staff who have alleged they had experienced aggressive behaviour from Alexander, sources said.

Alexander, who denies the claims, is a former government minister who held several roles in the Tony Blair and Gordon Brown-led Labour administrations, including that of international development secretary. He was backed by the board, with the charity issuing a statement saying the news was unexpected and that no formal bullying complaints had been received.

Alexander then stepped down two days later, saying the claims were a surprise to him and reiterating that they were untrue. Caroline Underwood, one of the charity’s two vice-chairs and a member of its board since 2016, stepped down on the same day.

In a lengthy statement on LinkedIn, which has since been removed, Underwood defended Alexander and said she had only ever seen him to be considered, compassionate and polite.

“In the time I have served with Douglas at Unicef UK I have personally experienced nothing but a dedicated commitment to helping Unicef UK move forward and a fierce ambition for the board and charity to be the best it can be,” she wrote. “Yes, he is ambitious for the charity, yes because of that he is sometimes demanding, as you might expect from someone with determination and vision, but he has shown outstanding leadership of an extraordinary board.”

Following the resignations, Unicef UK said Shatish Dasani, who joined its board at the start of September, had been appointed interim chair. It also said it would instigate an inquiry into the events – initially due to be led by an external adviser from the law firm Bates Wells, supported by two Unicef UK board members, then announced as an independent investiga­tion by Morgan, Lewis & Bockius UK LLP.

But then, in an explosive letter to Dasani, Deshmukh said members of the board had been aware of concerns around Alexander’s behaviour beforehand and called for a correction to the charity’s public statements.

Deshmukh’s letter said he was “profoundly concerned about the probity of the board’s actions, and accuracy of the board’s statements, in public and to staff”; and that he first raised concerns about Alexander’s behaviour with Kirsty Gill, a Unicef UK board member and chair of its people committee, on 12 August.

The letter said Gill had responded by saying she recognised the description of those behaviours from her conversations with Deshmukh’s predecessor Mike Penrose before his departure – including in Penrose’s exit interview, which she had conducted.

The letter, which was also sent to Helen Stephenson, the chief executive of the Charity Commission, said Penrose was understood to have raised concerns about Alexander’s behaviour before stepping down last autumn.

According to Deshmukh’s letter, he sent an email to Gill on 8 September describing a meeting he had with Alexander on 4 September, in which he said he had been subject to a hostile and aggressive tone of language from Alexander – who had criticised him for more than half an hour about the management of the announcement of the actor Olivia Colman as Unicef UK president.

Deshmukh told Gill the conversation left him feeling “bullied and humiliated”, according to the letter, and this had been the case in previous conversations between the two of them. When he followed up on the email in person on 13 September, Gill told Deshmukh that when she had spoken with Alexander, he had told her he spent the weekend of 5 and 6 September putting together a dossier of evidence of the media coverage of the Colman announcement, to prove Deshmukh’s incompetence in managing it.

Deshmukh’s concerns about Alexander’s behaviour culminated in a three-way conversation involving Gill to discuss the issues, according to the letter.

But it said Deshmukh was unhappy with Alexander’s response, meaning Deshmukh no longer had confidence in the former government minister and felt that his own position as executive director of Unicef UK had become untenable. Four days later, Deshmukh’s resignation was accepted by the board.

The Charity Commission then confirmed that it had opened a case into Unicef UK after receiving a serious incident report from the charity itself. 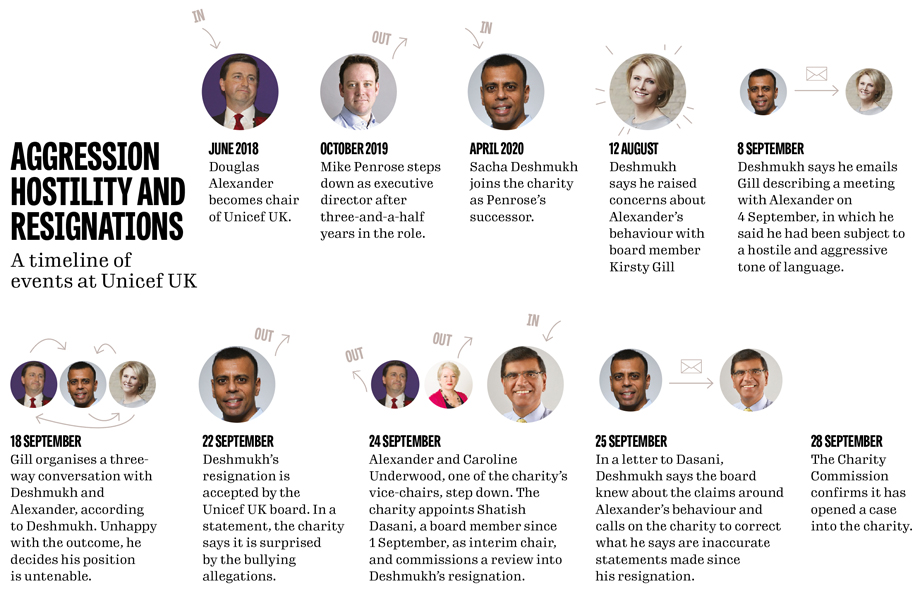 ‘Process can be undermined by culture’

The fallout from the case is damaging for Unicef UK, and serves to act as a warning for other charities to ensure they are not heading in a similar direction.

Kristiana Wrixon, head of policy at the charity leaders body Acevo, says maintaining a healthy relationship between the chair and chief executive is crucial.

“Prioritising regular, open communication is vital to building and maintaining a healthy relationship between a chief executive and chair,” she says. “Good communication means no surprises, clear boundaries and, crucially, not avoiding difficult conversations.”

Wrixon says processes matter in supporting good communication, whether that is robust induction procedures, written role description and regular appraisals, which she says are too often not in place.

Ros Oakley, the chief executive of membership body the Association of Chairs, which supports charity and social enterprise leaders, agrees processes and procedures are key but they only take an organisation so far.

“It’s so important to have good, clear processes in place and that they cover key people, such as the chair and chief executive,” she says. “That needs to include bullying, whistleblowing, disciplinary and grievance.

“But processes can be fundamentally undermined by culture,” she warns. “So an emphasis on building a healthy partnership culture is incredibly important, including opportunities to set what’s going well and what’s not.”

She says charities must ensure they monitor these culture indicators – through methods such as staff and volunteer surveys, staff retention figures and exit interviews – to try to understand if there are any trends.

“If you have the right processes in place and the right culture, then you get early warnings in time to do something about it,” says Oakley. “The longer it goes on, the harder it is to deal with and the risk increases of there being a parting of the ways and damage to the charity.”

If things do go wrong, however, Oakley cautions charities not to overreact.

“We need to be careful not to heap all the blame on a single person or event,” she says. “There is often a set of contributing factors and it’s important to understand the role that different things have played and tackle those.

“It also helps to make it more manageable when you break it down into different things that have played their part.”

Bringing in an independent third party to mediate or help charities understand what has gone wrong can also prove useful, according to Oakley.

Wrixon says it is possible for charities to bounce back from such upheaval, but it takes time because changes at the top level can damage trust in leadership.

“Recovering trust takes time, but it is possible if there is a genuine commitment to learning from what has gone wrong previously,” she says.

“To rebuild this, it is important for allegations to be robustly, transparently and fairly investigated, and for there to be regular communication with everyone connected to the charity.”