Analysis: How will it all add up?

Giving by cash machine is due to go nationwide next year. David Ainsworth looks at the key decisions cash machine operators will have to make and the desire of the sector to be consulted

One of the more eye-catching announcements in the government's Giving White Paper in May was that UK banks, building societies and cash machine operators had agreed to make it possible to give to charity at the country's 40,000 free-to-use cash machines, and were planning to start in 2012.

Francis Maude, Minister for the Cabinet Office, and Nick Hurd, Minister for Civil Society, declared themselves "delighted" by the agreement, and some national newspapers used it as the top line of their story about the paper.

Two months on, the government is encouraging the process and planning a meeting of cash machine operators with the Cabinet Office Behavioural Insights Team and voluntary research organisations. The intention is to evaluate different approaches to ATM giving and assess its overall impact.

The lead player in the scheme is Link, the organisation that provides the infrastructure that enables people to use, at virtually any cash machine, 100 million debit or ATM-only cards issued by major banks and buildings societies. It was Link that made the announcement in May, and it says the basic technology involved is not complicated.

Choosing the beneficiaries is key

A crucial question about cash machine giving is which charities will be selected - and by what process - to have their names on the screen when customers press 'yes' in response to the question 'do you want to donate?'

HSBC, which has enabled charity donation since 2005, consults its staff about its choice of charities: the ones it currently offers are the Alzheimer's Society, the British Heart Foundation, Cancer Research UK, Mencap, the NSPCC and WWF. It also has a seventh button used for appeals made from time to time by the Disasters Emergency Committee.

Peter Bull, head of community investment at HSBC, says every HSBC screen is the same across the UK, so only charities with UK-wide appeal are currently considered by the bank.

Barclays and Lloyds TSB were unable to tell Third Sector how they would select charities when the new scheme comes into effect, saying only that they supported the plans put forward by Link, and that their thinking was at an early stage. 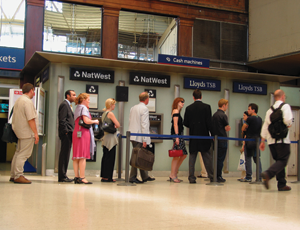 The Institute of Fundraising and the Small Charities Coalition, however, plan to urge cash machine operators to consult the sector about the selection process and make sure that small and local charities can be chosen, as well as national household names.

Mark Bowerman, a spokesman for Link, says some cash machine operators have already said that they intend to allow their local branches to make decisions about which charities they want to support. Others plan to make the decision at a national level.

"The options will vary from machine to machine," he says. "We expect there will be a mix of local and national charities. If a charity is big in a particular part of the country, maybe it will appear on cash machines in that region."

Louise Richards, director of policy and campaigns at the IoF, says banks should consult the sector before deciding how they will make decisions. "We don't want a situation where the banks say 'we're going to choose who we like and there's nothing you can do about it.'," she says.

Cath Lee, chief executive of the Small Charities Coalition, says that there is a genuine drive to get local charities listed alongside household names.

But unless people see a recognisable name, she says, they are unlikely to donate. One possibility is to ask for donations to organisations such as community foundations, which could pass cash on to a number of local causes.