Throughout The Nick Hurd Age (2010-2014), it often escaped the wider public's attention that a charities minister even existed. So thank you, Brooks Newmark - thank you very much. But the Conservative MP for Braintree's short reign as the Minister for Civil Society will be remembered less for what he did with his brief than for what he did with his briefs. Or, more to the point, without them. 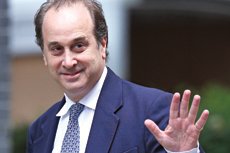 Having been appointed only in July, Newmark resigned from the job in September just before a story about his private life appeared in the Sunday Mirror. It turned out the "twenty-something Tory PR girl" Sophie Whittam, with whom Newmark thought he had been exchanging explicit pictures online, was in fact a male journalist, who duly splashed the honourable member across the news.

That's incredible. The charities minister on the front pages!? Who could have imagined it?

Further revelations followed, leading to Newmark's announcement that he would stand down before next May's general election. It's tempting to say his downfall came about because he failed to stick to his knitting - not least because that remark segues neatly into #knittinggate.

Speaking at a September conference, the minister was asked by a newspaper journalist whether he agreed with the Charity Commission board member Gwythian Prins, who told Third Sector last year that charities should "stick to their knitting" and stay out of politics. Newmark did and, needles to say, the charity sector was unimpressed, became crochety and felt like it had been stitched up, etc, etc.

Jesus invented the Big Society 2,000 years ago. I just want to see more of it

Depending on how you look at it, the bar has been set rather high or rather low for Rob Wilson, Hurd's successor's successor. Spare a thought, though, for poor Lisa Nandy, their Labour shadow; throughout this period of ministerial musical chairs, she has had the difficult task of trying to keep track of who exactly she is supposed to be shadowing.

In 2014, people did crazy things as part of fundraising viral campaigns: not wearing make-up, throwing ice over their own heads and circulating selfies just after waking up.

In March, Cancer Research UK raised £8m through a social media frenzy in which users shared photos of their unpainted visages, then got their wallets out. This was but an appetiser for the success of the ice bucket challenge, which, though derided by some as a celebrity wet T-shirt contest, raised millions across the world.

In September, an extraordinary online response to a tragic fire at the Manchester Dogs Home resulted in more than £1.4m being pledged to the charity in just four days.

This trio reminds us that chance and fate are laws unto themselves.

In February, the chair of the Charity Commission, William Shawcross, told MPs that he had spent his first year in the job "fire-fighting" and that he hoped 2014 would involve less fighting and more prevention of those fires.

That wish was never really granted. The commission faced criticism - but also praise in some parts - for its decision in January to register a Plymouth Brethren congregation as a charity.

Charity law has been asinine ever since 1601, when it began in a statute that is still followed today

Having been on the receiving end of a savaging from the National Audit Office in December 2013, the commission was then subjected to another highly critical report, this time from the Public Accounts Committee, in February. The PAC report said the commission lacked a coherent strategy and the strong leadership needed to address its shortcomings. Ouch.

As it happened, Sam Younger, chief executive of the regulator, was due to leave the commission in the summer anyhow, so into the fray came Paula Sussex, announced as its new head in April.

New broom Sussex might have been, but this didn't mean issues such as the commission's ever-shrinking budget or fears of charity funds ending up in terrorist hands - testing the mettle of commission press office and public affairs staff - were swept under the carpet. The commission's proposal to force charities to declare how much money they spent on campaigning was much criticised and dropped for the time being, but will be revisited next year.

After a couple of quiet months bedding in, Sussex revealed her vision of a risk-based, tech-enabled, more proactive regulator. Time will tell whether this equates to prevention rather than an extinguishing of fires, but Fireman Shawcross would do well not to take the heatproof overalls off just yet.

A tale of two sector knights

In Sir Stephen Bubb, chief executive of the charity leaders guild Acevo, and Sir Stuart Etherington, his counterpart at the National Council for Voluntary Organisations, we have two knights jousting for the throne of the realm of charities.

The nearest they came to direct conflict was in August. The Electoral Commission had just released its advice on compliance with parliament's new lobbying act. Bubb kicked up a stink, calling the guidance "incomprehensible". Etherington begged to differ, saying he winced at such hyperbole and "theatrical claims". With the autumn came Bubb's next move. Etherington had just announced an NCVO inquiry into Charity Commission governance; the next day Bubb's lieutenants were telling scribes that he had already done nearly the same, a month before, thank you very much.

From whence did the renewed tensions spring? Perhaps from Bubb's reported comments to a Third Sector journalist at the drinks reception after the NCVO's conference in June: "Oh dear; terrible wine." We can only speculate.

It's the office secret Santa draw and you've picked out the name of someone in fundraising whom you barely know. Fear not! Thanks to the Institute of Fundraising's Proud to be a Fundraiser campaign, you'll surely find the perfect gift among the mugs, clocks, phone covers and dog, adult or baby clothing (we could go on, but won't) available on the web, all bearing its proud slogan.

Highlights of a somewhat pride-bruising year for fundraisers included a Channel 4 Dispatches documentary, assorted critiques of fundraising methods from newspapers and MPs and an attempt by Birmingham City Council to win the power to fine unruly chuggers. Possibly worst of all, though, was the comedian Henning Wehn's failed attempt to put the profession into Room 101 on the BBC comedy show of the same name.

The IoF, the Public Fundraising Regulatory Association and the Fundraising Standards Board also spent this year facing questions about the alphabet soup recipe for fundraising regulation - ingredients: FRSB, IoF, PFRA; leave to simmer indefinitely. The accountancy firm PwC released its report on the back of nine months spent reviewing the various bodies' roles and duties, and their future. Only an underwhelming summary of the report - pretty much an endorsement of the status quo - was released, but the full version contained some rather more souped-up details of mutual mistrust.

Meanwhile, change might be afoot, with a new chief executive at the PFRA and a new chair for the IoF, the latter meaning the end of the Mark Astarita era. And the rules of the game could further be changed, pending the Cabinet Office review of solicitation statements.

Another soup-er shake-up might result from the promise of further Scottish devolution - a plea to government by the Scottish Council for Voluntary Organisations, asking for full devolution of fundraising regulation.

Slaps: How the mighty fall

It's been a bad year for the Society Network Foundation, the charity that owns the Big Society Network, and for the anti-bullying charity BeatBullying - both have gone from receiving pats on the back (and pounds in the bank) from government, to receiving slaps in the face from others. The Charity Commission has dismissed concerns about SNF's governance, but questions remain unanswered, in particular over alleged misuse of Cabinet Office funds. As for BeatBullying, read our coverage for more on its rise and recent fall.

I visited the offices of the RSPCA today. It's tiny – you couldn't swing a cat in there

Media storm clouds have also gathered this year over charities with royal backing: the RSPCA and the Halo Trust, the landmine charity made famous - as it is near obligatory to say in all reports on it - by Princess Diana, have both been in the spotlight.

Some received more than just slaps on wrists for their misdemeanours: criminal convictions were handed out this year to fraudulent Help for Heroes fundraiser Christopher Copeland, Oxfam's former head of counter-fraud Edward McKenzie-Green, who went from gamekeeper to poacher, and Eyob Sellassie, the founder of the now defunct charity African Aids Action, who was given a suspended sentence over a £100,000 Gift Aid scam. This last case was also an indirect slap for the Charity Commission over its earlier handling of the AAA case. 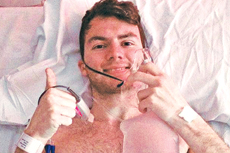 The wide grin and thumbs-up pose of the late Stephen Sutton MBE (left) helped make him the most recognisable face of UK charity. Before and after his deat h, aged 19, from bowel cancer in May, he raised more than £5m for the Teenage Cancer Trust and inspired and moved millions more.

Kris Hallenga, founder and chief executive of the breast cancer charity CoppaFeel!, also won praise for the attention-grabbing if divisive partnership with The Sun's Page 3 girls.

The Great British public also deserves to be lauded, not least for its voluntary efforts to give aid, shelter and relief to victims of flooding earlier this year.

Finally, a round of applause for the gay rights group the Human Dignity Trust and the fact checkers Full Fact: both finally won charitable status after lengthy battles with the Charity Commission.

Fundraising: Sector has always wanted to excel here, but sometimes goes too far. Interest in so-called "social" media is already paying off. Only time will tell whether we continue to teach 'telephone' and 'street' among core skills.

Finance: Revision for the new-style Sorp examinations next year is a priority. And you might grumble, but it would be gratifying to see you more disposed to providing full answers to questions on chief executive pay.

Governance: Sector has had an easy ride in the past, but with new head of department Ms Sussex and a bigger budget (thanks, bursar!), I expect this to change in 2015 - there will be more proactive, risk-based marking systems.

Management: I'm aware that you're unhappy to be paired with so many private students on your welfare-to-work and probation projects, but I nonetheless insist that sitting you next to them will produce results.

Communications: There is, you will know, a school council election coming up, and the new lobbying rulebook has been introduced for a reason. I've got my eye on you. Also, I note yet more fancy rebrands. Simply put, why?

Social enterprise: The now retired Mr Hurd was desperate for you to be more interested in the new social investment modules. This is a key subject for your future; you fail to understand that you neglect it at your peril.