Having an online presence is important for small charities, she tells Sophie Hudson

When entrepreneur Marcelle Speller sold her website Holiday Rentals in 2005 for a significant sum, having built it up during the dotcom era, she decided she wanted to put her wealth and expertise to some charitable use.

She attended an Institute for Philanthropy course in 2007, which she describes as a "fantastic experience", and says it was during this course that she had a "lightbulb moment".

"I suddenly realised I could use my skills from Holiday Rentals, which allowed individual holiday home owners to compete against big travel companies, to help smaller, local charities compete for funding against larger charities," she says.

By chance, Speller met Matthew Bocock, chair of the Community Foundation Network, while on the course. 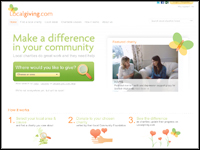 He told her about the 44,000 small, vetted charities that CFN had on its database. Soon after, Speller decided to set up Local Giving.

The site allows people to find small charities to donate to, according to their geographical location or the type of work they do.

Speller says she realised that these smaller charities needed to have an online presence and that they should see the site as a marketing tool.

Charities can appear on Local Giving for free for the first three months and then pay £60 per year.

A small trial of the site has been running since September 2009, and £3,000 has been raised since donations were first invited in April for the 160 charities that are registered. The average gift is £29.

But Speller has big plans: by the end of the year the website will be rolled out nationally, and her plan is for 20,000 charities to be registered on the site in the next 12 months.

All of these charities will be vetted by CFN and, because any money donated goes through CFN, HM Revenue & Customs and the Charity Commission have approved Local Giving as the only place on the internet where people can donate to unregistered charities and use Gift Aid.

Speller says she has plans to introduce a direct debit giving mechanism and the option of volunteering through the site. To date, she has backed the project with £1m.

Yet her philanthropic work doesn't end there. She is a trustee of the Hampshire Community Foundation and supports the Helen Bamber Foundation, which works with victims of torture.

She estimates that she gives about £30,000 a year between the two.

For Speller, the support she gives to the Helen Bamber Foundation is particularly personal.

"My mother was tortured by the Gestapo during the war. When I met Helen and we spoke about the amazing work that she does, I became very emotional and knew it was something I wanted to support," she explains.