Book Review: An exhilarating look at power and change 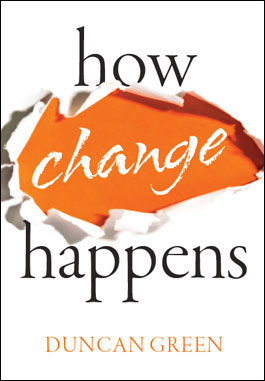 Many - perhaps most - charities pursue change in the course of helping their beneficiaries: change in laws and policies, cultural and social norms, or the distribution of power and resources. But change is often blocked by vested political or corporate interests, or by entrenched habits and beliefs.

This book aims to make change less elusive by proposing a "power and systems approach" based on the author's 35 years of experience in international development. Duncan Green is currently Oxfam GB's senior strategic adviser.

It starts by looking at complex systems - states, communities and families - and the ways they evolve or are influenced, and by analysing the nature and operation of different forms of power: visible, hidden and invisible. It then examines institutions, including the law, political parties, corporations and the media, and how they have changed and can be influenced; and it concludes with a section on how activists can use the lessons that emerge and several case studies.

"The power and systems approach encourages multiple strategies, rather than a single linear approach, and views failure, iteration and adaptation as expected and necessary, rather than as a regrettable lapse," it says.

"Analysis of the system is not a one-off, up-front engagement, but a continual process of analysing and re-analysing the context in which the programme or campaign operates."

The process Green describes is more art than science. He compares it to "dancing", with both the organisations you are trying to change and those working alongside you. It requires "risk-taking, rule-defying mavericks", he says, as well as planners and adminstrators.

The book is ideas-packed, often exhilarating, potentially of interest and use to all third sector campaigners seeking ways to pick the locks on the institutions that resist change.

How Change Happens, by Duncan Green, is published by Oxford University Press, £16.99 hardback