Any new book by Colin Rochester is something to look forward to. He is one of the most intelligent, articulate and rooted academics of the voluntary sector and writes with a passion and fluency that is always thought-provoking and never less than engaging. His latest tome, Rediscovering Voluntary Action, is no different, and I enjoyed it immensely, notwithstanding the fact that I disagreed with much of its message. 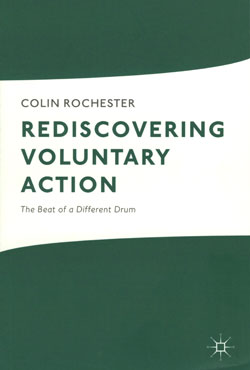 First, the good stuff. As becoming a fellow founder-member of the Voluntary Action History Society, Colin is strong on the past. His chapter on the roots of voluntary action is handled adroitly, and I particularly enjoyed his attempt to bring together the literatures on the voluntary sector and social movements, which all too often in the past have ploughed very separate furrows, as well as his plea not to forget "serious leisure" as an alternative way of conceptualising volunteering alongside philanthropy and mutual aid.

Throughout the book, Colin draws on the work of his former colleague and academic mentor David Billis, and he makes intelligent use of Billis’s now famous work on the intersecting space between voluntary organisations and voluntary associations, using it as the launchpad for his heartfelt plea to "rediscover" voluntary action. As always with Colin, the material is handled well and the arguments expressed with passion and style. But on this occasion I think he has got it wrong.

His thesis is basically that the voluntary sector and volunteering have lost their way. Seduced by the embrace of the market on the one hand and the state on the other, the sector has sold out on the core principles of independence and informality that made it such a distinctive force for good in society. In its place has grown a bureaucratic, professionalised, market-focused monster that is in hock to its paymasters in the statutory and corporate sectors, and has increasingly lost its voluntary and volunteering ethos. Of course, there is a grain of truth in this and many authors over the past decade have raised the dangers of an over-professionalised and co-opted voluntary sector; but the trouble is that he overstates his hand and, in doing so, I believe he undermines his argument.

Colin would hate me for saying it, but the picture he paints is a rather old-fashioned one, harking back to a soft-focused, golden age of clubs and associations, run by volunteers uncorrupted by links to government and the corporate sector. The trouble with this golden-age theory of voluntary organisations is that the golden age never existed. Voluntary organisations have always inhabited a world where they rub up alongside the state – indeed, this moving frontier is one of the predominant features of the history of voluntary organisations over the past couple of hundred years. The funding of the sector by the state is not new and, although the nature of the relationship has shifted, there has never been a time when the sector has lived in a bubble on its own.

And nor should we wish this to be the case. If we believe that voluntary action – the voluntary sector and volunteering – has the power to change the world for the better, then it is surely too important to spend its time on the margins, keeping its hands clean of the horrors of the state and market. It needs to be in the thick of the action, arguing its corner as to why voluntary action matters, sticking firm to it principles, but accepting the inevitability of compromise and the occasional disappointment that partnership will bring. By and large I think the sector has managed this tightrope walk pretty effectively over the years. Of course, we should not be complacent, and we need constantly to be vigilant and guard our independence and integrity at all costs. But to pine for a lost world where voluntary organisations and volunteering have nothing to do with the state and market – which in my mind would limit their ability to make the biggest difference they can to our world – seems to me to be taking fundamentally the wrong course.

It was the Reagan administration in the US that most assiduously of post-war western democracies bought into the theory of ‘crowd-out’ and the notion that the best way for government to support voluntary action is to get out of the way and allow a thousand flowers to bloom. Studies have shown that the experiment was not an overwhelming success and that, as the state withdrew its funding and support, rather than flourishing, many parts of the sector retracted in parallel. There are echoes of the Reagan administration in the coalition government’s approach to the voluntary sector and volunteering, particularly in relation to infrastructure, and I fear for the long-term impact of the de-funding of national and local support services. Colin’s thesis of non-engagement between the state and voluntary sector smacks uncomfortably to me of a restatement of the crowd-out position.

Colin’s second attack on the sector today is that it has lost its campaigning edge. Again, he puts this down largely to the increasing embrace of the state. The national infrastructure bodies come in for particular criticism, and although I need to be careful not to be seen to be rushing to the defence of a set of institutions I have spent most of the past 20 years working for (and don’t I know we have scope for improvement!?), I would wholeheartedly reject the notion that somehow because we have been paid by government we have piped only its tune. It is perhaps unfortunate for Colin’s argument that the book was completed before the coalition's proposed restrictions on the campaigning rights of charities and the fierce defence of the sector led by the NCVO, Acevo and other strategic partners. The idea that organisations in receipt of public funds automatically throw away their independence and voice is a tad simplistic to say the least.

The great AJP Taylor, perhaps the most stylish and incisive historian of them all, was once asked what is the point of history – he famously remarked that it was to tell a good story. Colin lives up to this dictum and tells a good story very well. It is just a pity that it is largely the wrong story.