Book review: A shared faith in the power of the sector 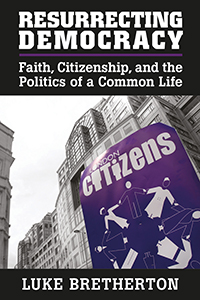 Some of us still cleave to two articles of faith about voluntary action: that voluntary organisations play a transformative role in society that goes far beyond delivering public services; and that the sector has an almost limitless ability to reinvent itself in response to changes in its environment.

Weighty evidence to support these beliefs is provided in Resurrecting Democracy by the academic Luke Bretherton. At its heart is an in-depth case study of an exciting manifestation of the latest generation of voluntary organisations, London Citizens. This alliance of community organisations filled the Barbican theatre in the capital in 2009 for the launch of its proposals for reform of the financial institutions responsible for the 2008 economic crisis. The 2,000 participants represented more than 150 organisations that included churches, mosques, trades unions, schools and universities.

Bretherton explains how this unlikely alliance between secular and faith-based organisations was created and how "the relationship between Christianity, Islam and Judaism, and those without a religious commitment" was mediated "in order to forge a common life". He describes the processes through which the body has used this understanding to address issues of shared concern.

This book is heavyweight and heavy-going, and might be destined to end up alongside Thomas Piketty's Capital in the Twenty-First Century as one of those books whose influence is in inverse proportion to the number of people who have read it from cover to cover. But, like Capital, its message is timely and important, providing a means to understand this emerging world of voluntary action and how we can play a part in its development.