Delivery of public services by the third sector in recent decades has gone through several phases: the contract culture under the Thatcher government, a time of greater partnership under Labour, and increasing private sector dominance under the coalition. 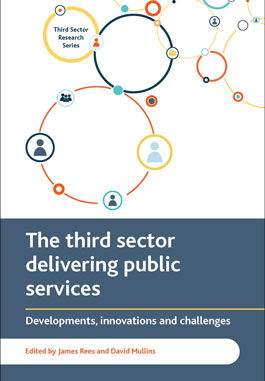 This valuable book analyses those phases in 13 chapters by 16 British academics who have studied the sector, including professors Pete Alcock, David Mullins and John Mohan, director of the Third Sector Research Centre at the University of Birmingham.

It starts with a section on the development of successive government polices and continues by examining trends such as the spin-out of public services, the "social value" agenda and the effect of service delivery on volunteering.

Its final section focuses on the changing and expanding role of the sector in four areas: contracted employment services, personalised social care, the provision of housing and the rehabilitation of offenders.

It's clear that public service delivery has been going on in various ways since the early years of the 20th century and has always provoked fears that the third sector will be taken over and shaped in their own image by the public and private sectors.

But the pace of change has accelerated rapidly since the turn of the millennium, not least because public funding of the sector grew from £9.1bn to £15bn in the 10 years to 2011. Service delivery now takes a shifting, evolving variety of forms.

And the prediction of the editors is that since the change of government last year, "the sector faces a public services environment that is tougher, more commercial, with fewer resources, and that is arguably more inimical to third sector values".

The Third Sector Delivering Public Services: Developments, Innovations and Challenges, edited by James Rees and David Mullins, is published on 26 July and can be ordered for £19.99 from policypress.co.uk