Recent figures from the Charity Commission suggest a marked rise in employment at smaller and medium-sized charities. But, as PJ White reports, that might not necessarily be good news

In the summer, Mike Wild, chief executive of Manchester's charity sector support organisation Macc, presented a report on the state of the local sector to the assembled representatives of the voluntary and community sector. Before he displayed the slide that showed the number of paid charity staff in the area, he asked teasingly: "Is anyone going to suggest this has gone up?"

Of course it had gone down, said Wild, quickly confirming the experience of people who had weathered years of cutbacks, slow growth and funding challenges. He showed that the voluntary, community and social enterprise sector in Manchester lost 1,300 full-time-equivalent staff between 2013 and 2017. That's a big dip in a sector that now employs 11,000 FTE staff, but no one was surprised.

And yet, a month after Wild gave his presentation, jobs data from the Charity Commission did deliver a surprise. Its snapshot account of returns from charities in England and Wales suggested significant job growth among smaller and medium-sized charities. Comparing data from June 2017 with that of the same period in 2016 suggests charities with incomes of between £100,000 and £5m have gained roughly 36,000 jobs, an increase of more than 12 per cent. Most are in the income bracket £500,000 to £5m, which saw a rise of 13.4 per cent in FTE staffing levels.

The Charity Commission compiles the figures from the annual returns of charities with incomes of more than £10,000 a year. But is it safe to assume that they represent real job growth within the sector? The commission won't comment on that assumption because it can't guarantee the accuracy of the charities' returns. But it says it knows of no technical reason why the figures should be wrong. 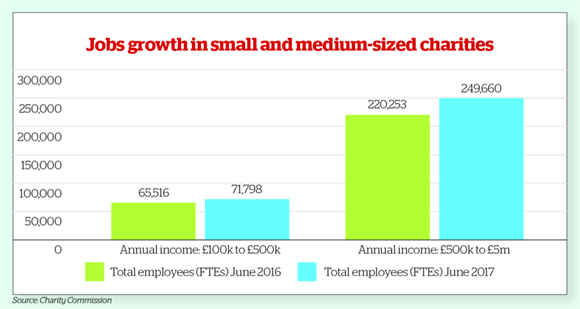 Aidan Warner, external relations manager at the National Council for Voluntary Organisations, advises caution, but agrees that there seems to have been jobs growth. NCVO researchers have not examined the figures in detail, he says, preferring statistics from the Labour Force Survey that suggest "a rather gentler increase: 3 per cent from 2015 to 2016".

Warner says that, in its experience of most charity sector metrics, the NCVO feels "the aggregate picture hides a lot of diversity in the experiences of individual organisations". The data does not say anything about the change over time for any individual charity, but simply gives total figures relating to charities within different income bands.

If the figures are right, the 9,000 charities in England and Wales with incomes from £500,000 to £5m a year employed, on average, three more staff each between 2016 and 2017. That raises eyebrows and questions, such as where the extra money is coming from. The simple answer appears to be there isn't any extra money. Not much, anyway.

As the table above shows, total charity numbers are up, income is slightly up and spending is up, but by about 2 or 3 per cent. This doesn't explain the rise in staffing levels. One of the most likely reasons would be an increase in the number of charities employing lower-paid workers, possibly at the expense of higher-paid roles. Among the charities with incomes of between £500,000 and £5m, the sector's 9,000 charities seem to have created 29,000 full-time jobs at an average increased spend of £10,892, suggesting the new roles are paying well below the £22,000 a year the NCVO estimates the average charity worker receives.

To establish what was happening on the ground, Third Sector analysed the annual accounts of 30 charities with incomes of between £500,000 and £5m (see graph below) to see their individual trajectories over recent years. The figures are taken from individual annual reports over the years from 2011 to 2016. 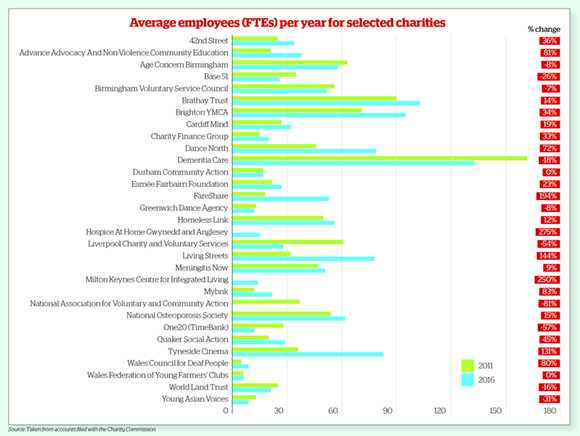 Each charity has its own story. For example, the number of artistic staff employed by Dance North nearly doubled in that time thanks to a significant Arts Council grant. At the other end of the swings and roundabouts, the local infrastructure body Navca lost more than half of its staff as national funding streams ended.

Helen Walker, chief executive of the volunteering charity TimeBank, says these fluctuations are the new norm for small and medium-sized charities. They expand when a contracted project is setting up, and downsize when it comes to an end.

The model works by outsourcing core functions such as comms, IT, finances and HR to save on overheads. Most of her staff team, she says, is attached to project money.

TimeBank suffered badly from central government cuts, and staff numbers have declined as a result. In 2011 it had an income of £1.26m and employed 28 full-time-equivalent staff. By 2016, this had fallen to £570,000 and 12.3 staff, respectively.

It coped by using reserves to continue to deliver services. "I always say reserves are for a rainy day, and it's pouring right now," says Walker. She adds that the deficit figures are better in the current year's accounts.

Staff numbers at Hospice At Home Gwynedd and Anglesey have grown steadily over recent years. At the same time its annual income has fluctuated, mainly downwards. Income for 2016 totalled £615,000, leaving it £98,000 short of expenditure. Even so, the hospice added four full-time-equivalent staff, bringing the total to 15.

The expansion is about using paid staff to build capacity in shops and community hubs. Paid shop supervisors can take over roles not appropriate for volunteers, Lynn Parry, general manager, explains. That includes operating newly introduced electronic point-of-sale tills that will help to identify donated goods and reclaim Gift Aid. Paid shop staff are all part-time, generally 20 hours a week.

The funding is from reserves. "You can do that for short time, if you're speculating to accumulate," says Parry. She is optimistic the strategy will work, though she's conscious that the general economic slowdown has affected its 13 shops: "We are surviving, but it's hard. We have to change and adapt."

Clothing has suffered, with fewer high-quality donations. Furniture and electrics are doing better, though Parry knows that could all change.

But drawing on reserves is not only for a rainy day: it can be part of a growth plan. The boards of the charities Dementia Care in Newcastle and the Caernarfon-based Hospice At Home Gwynedd and Anglesey have consciously decided to employ more people, despite falling income (see side bars). Using reserves to fund strategic growth is not what medium-sized charities do traditionally. A study published by the Community Foundation Tyne & Wear and Northumberland in June found that only 18 per cent of third sector organisations used reserves for development purposes - and only 3 per cent did so by investing "heavily". Far more organisations drew on reserves to pay for essential costs such as existing staff, utility bills or rent.

The food waste charity FareShare, which won Charity of the Year at the Third Sector Awards, has been able to grow staff numbers because money is coming in. "People understand the connection between food waste and poverty," says chief executive Lindsay Boswell. He is supported by a very business-minded and commercial board: "In the commercial world, any business that stands still is going backwards, and that's the way we're looking at it as well."

FareShare's voluntary income increased by 51 per cent last year. Its year-on-year increase in income from trusts, foundations and corporates was close to £500,000. The charity employed an additional 10 staff, an increase of 23 per cent.

For other charities, the "dash for cash" is the new coping mechanism, the new strategy, says Macc's Wild: "So many leaders say they don't have time to think or are busy hopping from one grant application to another, always thinking about the next one in order to keep the basics going."

If there is jobs growth, Wild says, it is more likely to be in the area of front-line provision. "But there's no matching growth in organisational capacity", he says.

When services contract, including in the public sector, the voluntary sector is left to step in, says Wild: it might be picking up grants or just stretching existing resources to respond to urgent social need.

Food banks and advice services would be examples, he suggests. He also points to the area of social prescribing, or community referrals, in which health professionals make referrals to non-clinical services, often provided by voluntary sector organisations. "You can hear some health and care professionals thinking they've found a lot of free stuff that they can simply refer to," Wild says.

The board of Dementia Care, based in Brunswick Village in Newcastle upon Tyne and covering the north east, also decided to use reserves in the last financial year. It added seven staff to the direct delivery side and lost two from management and administration. The immediate driver was not income generation but providing care by meeting rising demand for the organisation's services.

According to its 2016 annual report, the charity supported more than 300 people with dementia, an increase of 20 per cent over the previous year. Yet its total income, £2.5m, was £200,000 lower than in 2015. This was largely the result of a reduction in grant receipts.

Like many voluntary sector bodies in the north east, Dementia Care is feeling the loss of the Northern Rock Foundation. At its peak in 2006, the foundation made grants totalling more than £27m. That source is now ended.

Dementia Care trustees and the senior management team also have a growth strategy based on geographic expansion. Their target is to grow income to £3.9m a year over the next two years. Anticipated financial deficits over the next two to three years will be funded through reserves, followed by a return to breaking even.

With resources focused on the front line, organisations risk becoming unbalanced, hollowed out even. They lack the skills in finance and strategic planning needed to be truly responsive and resilient.

"They are adapting to the new contracting environment, winning more and more contracts," she says. They have the infrastructure for strategic and financial planning, and can cope with risk and uncertainty.

Perhaps the job growth figures contain a mix of good news and bad news. They certainly show the difficulty in saying anything definitive about the sector. Wild questions whether it is helpful to think about "the sector" at all. "Small local charities have more in common with local businesses than with big national charities," he says.

Hartley is equally trenchant in identifying variations. Whoever is getting the money to pay more staff, she doesn't think it is charities in the poorest and most deprived areas of the country. There's little point in diversification and trading in an area such as Easington, she says: "There isn't any money." Organisations in the poorest areas are more likely to be in weak and vulnerable financial positions. They suffer most from dependency on public sector funding. "In the poorest areas you haven't got the blue-rinse brigade, the golf club and the philanthropists giving you funding," Hartley says. "They don't exist in those areas."