Boris Johnson, the Mayor of London, has boosted the campaign to protect a £26.4m voluntary sector grants scheme in the capital as councillors prepare to debate the issue today.

London Councils, which represents London’s 33 councils, awards grants to more than 400 voluntary organisations, ranging from £5,000 to £500,000, for projects that operate across London boroughs.

The organisation opened a consultation on the future of the scheme in the summer and some council leaders, facing cuts to their funding from national government, want their contributions 'repatriated'.

In his written response to the consultation, Johnson said he had "doubts about the pace of this review", which could leave organisations with only three months’ notice of funding cuts.

Johnson said he preferred "a more phased or transitional approach", which would allow "for a more detailed evaluation of priorities" as well as time to consider the impact on equality groups.

"Your proposals will see funds for a disproportionately large part of services ‘repatriated’ to boroughs which will not be ring-fenced for the voluntary sector, leaving a pan-London grants programme too slimmed down to have any meaningful impact," wrote Johnson. 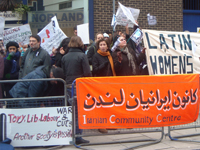 Sarbjit Ganger, chair of the network, said some of its 42 members faced closure if grants were withdrawn, but said she felt optimistic that the campaign against cuts would be successful. "The demonstration will aim to keep the pressure on," she said.

Seventy-four per cent of 519 respondents to an online consultation on the future of the scheme opposed proposals to change it.