The think tank New Philanthropy Capital has decided to revitalise its brand after 10 years with the same corporate colours and logo.

Spurred on by the arrival of its new chief executive, Dan Corry, last October, the charity set about prioritising what it wanted its future branding to convey.

"People who met us were always surprised by our energy, passion and commitment to the sector," says Sue Wixley, head of communications at NPC. "This suggested to us that something was missing in our branding." 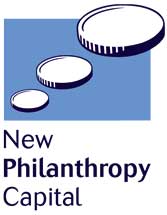 The charity decided that the rebrand also provided a long overdue opportunity to revamp its website. "We wanted the site to be more user-friendly," says Wixley. "We have a lot of valuable resources that we want to share with the sector, and we were worried that people were struggling to find them."

NPC received funding from a grant-making foundation, which wished to remain anonymous, to cover the £50,000 cost of the new website, created by Public Zone. It also received pro bono advice from the communications consultancy Blue Rubicon.

The charity paid the design agency MakeUP £15,000 to develop a new logo. The star-shaped design is made up of eight warm colours to reflect the passion and energy of the charity's staff, says Wixley. The shape is designed to "reflect a spark conveying energy and innovative thinking", and represents the charity's mission to "spark change in the sector".

"The geometric style represents rigour and analysis, the depth of our understanding and the many layers to our work," she says.

The think tank is also using the abbreviation NPC more prominently in its branding. "We didn't want to change it completely and lose our history," says Wixley. "We still have the same mission and purpose."

The think tank's rebrand also includes a change of domain to www.thinknpc.org, which Wixley says reflects the organisation's thoughtfulness and provides a call to action to supporters.

It's easy to take a pop at new brands, but New Philanthropy Capital - now rebranded as NPC - has achieved a lot with a small budget. It has adopted a bright and dynamic logo and a discernible visual language - the result is that the brand passes the all-important test of 'if you cover the logo, do you still know who it is?' On the website, NPC's complex offer is articulated clearly. So what could have been done better?

Using initials instead of the full name weakens the communication of who and what NPC is. After all, the organisation is complex and doesn't have the brand awareness of, say, the BBC. This is further compounded by an apparently ad hoc switch between name and initials. The logo would now benefit from an explanatory strapline.

Nevertheless, overall this is a good job done - more dash than cash.