The charity enjoys a high profile in part because it is often featured adding context to medical studies, meaning it is consistently in the news. Thanks to the efforts of its communications team, the BHF has in the past year contributed its views to a range of news stories, boosting the charity's profile and putting medical studies into a context the public can understand.

In the past year these have included a study that found diabetes fuelled the risk of heart failure, how a good night's sleep can help protect the heart and the ways in which chemicals in red meat can damage the heart.

The charity has a consistently strong brand. Its score in our index, which measures overall brand health, has been fairly steady at between +30 and +36 over the past year, with an average of +33.1.

Looking more closely, there have been three distinct peaks of activity. The first was in the build-up to Christmas; the second was around the Rock Up In Red campaign in late January and early February; and the third was at the time of the launch of the Fight for Every Heartbeat campaign in late April. There was a dip in its score over the summer months. 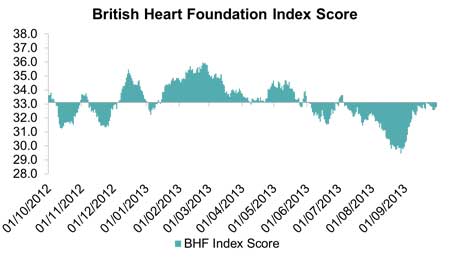 The peak in December's index score appears to have been driven by two things. The first is the heath advice the charity issued around Christmas dinners. The second was a very successful story it put out about the least wanted Christmas present, which saw strong coverage in the likes of the Daily Mail and the Daily Telegraph. The resonance of these pieces of media activity among the public is shown in the British Heart Foundation’s Buzz scores that show a defined uplift in the run-up to Christmas as the two stories came out.

It is clear that different age groups respond to the charity in different ways. Its Index score is healthiest among the 50+ demographic – indeed, over the past year, for all but two brief occasions, it has been the strongest age group for the British Heart Foundation. The over-50s average +35.9 over the time scale covered, hitting a peak of +39.6 on Christmas Eve and a low of +32.8 in late August. By comparison, the average Index score for 35-49 year olds is +32.2 and among the under-35s is +29.1.

Particularly interesting is that during the activity around the "Rock Up In Red" fundraising day in February – which included celebrity endorsements and consumer news stories – its Index scores among 35-49 year-olds increased. The British Heart Foundation’s overall brand health among this group improved from +31.1 on 4 January to +37.3 on 13 February. In the same period, the scores for the under-35s and over-50s stayed relatively stable. 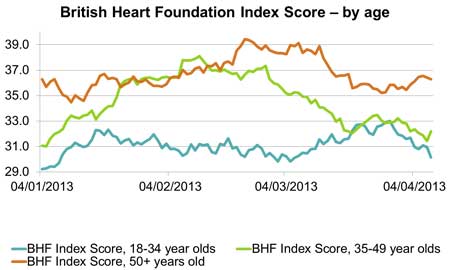 The charity undertook a lot of media activity in late April as part of its "Fight for Every Heart Beat" campaign. The British Heart Foundation released its heart disease death rate figures or the UK and coverage included a piece on Radio 4’s Today Programme as well as separate statistics for Northern Ireland and Scotland. The PR activity was tied to the launch of a new advert that explored all of those who have been affected by heart disease.

The launch of the campaign had a marked impact on the charity’s Buzz score, which measures recent brand sentiment. We are using a two week rolling average for our figures in this report but there was an evident upswing in its score after the launch of the "Fight for Every heartbeat" campaign on 19 April. The charity’s Buzz scores went from +10.1 on 17 April to +12.9 by the end of the month. 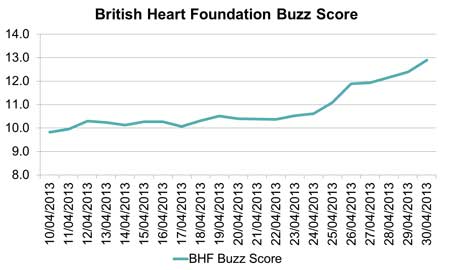 The British Heart Foundation has a strong brand, based on its press activity, fundraising ventures and powerful advertising. The charity maintains a continuous media presence through comment on related stories and bolsters this through well-targeted coverage generated in connection with particular events.

The success of these activities in driving not only media presence (as shown through the Buzz scores) but also in improving brand health (as displayed in the Index scores) is good evidence that its marketing and media functions are joined up and effective.

Simon Gillespie, chief executive of the British Heart Foundation, says: "Coronary heart disease is the UK's single biggest killer, so it's great news that we're connecting with so many people. Our campaigns are vital for raising awareness of our life-saving work, but a lot more goes on behind the scenes. The BHF is the largest single funder of cardiovascular research in the UK and we're backing thousands of research projects that could protect families from the misery that heart disease brings.

"We've had success in the past year with our Mending Broken Hearts appeal and our Great British Bagathon. We're pleased that our messages resonate with people, but our work is far from over and we have exciting projects around the corner."