Cancer Research UK has had a busy few months. It launched an advertising campaign just before Christmas, and throughout January it encouraged people to take part in its Dryathlon - participants did not drink alcohol and donated the cash they would have spent to the charity.

In late January, at the same time as it launched publicity for its 2013 Race for Life, it was censured by the Advertising Standards Authority for a "threatening" piece of direct marketing.

While most of this activity was positive for the brand, how much of it was noticed by consumers and what impact did it have on the public’s support for Cancer Research UK?

The CRUK adverts were first broadcast in December last year on television, in cinemas and online. They took the notion of research as the enemy of cancer and showed how it improves the chances of surviving the disease. The charity's 'buzz' score, which tracks whether people have heard something positive or negative about it, rose steadily from 15.7 in late December, when the adverts were first broadcast, to 22.7 at the end of January. It maintained a level close to this score throughout February.

The charity's improvement in its buzz score is not a particularly striking one if it is compared with the fluctuations in the charity's fortunes over time. However, there are two aspects of the latest improvement that do stand out - the most recent increase in buzz has been sustained for longer than in previous campaign periods; and Cancer Research UK has edged ahead of Macmillan Cancer Support for the first time since last summer, when we first started to measure the buzz surrounding charities (although this could well change in light of Macmillan’s "Not Alone" campaign). 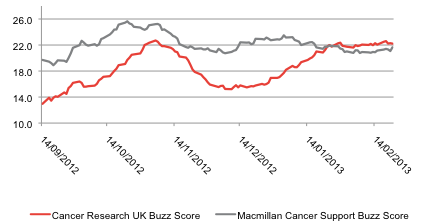 How has Cancer Research UK sustained its support this time? While the adverts were clearly a factor, the charity also sequenced and planned its campaigns to keep the momentum going. Using SoMA – our social media analysis tool – we found that the increase in people hearing positive things about Cancer Research UK in the New Year was driven to a sizable extent by Dryathlon, with the phrase being the most widely used term associated with the charity on Twitter during January. Similarly, from the first week of February phrases associated with Race for Life become the most popular terms linked to Cancer Research UK.

While the Dryathlon was not aimed squarely at males (indeed, some of the campaign’s most high-profile media coverage came from a female perspective), the figures clearly show that men had higher buzz scores than women throughout January, only to drop off when Dryathlon ended. The charity’s buzz among women continued to increase steadily throughout February as Race for Life activity started. This made up for the fall off among men and helped the charity maintain the momentum established by the advertising campaign. 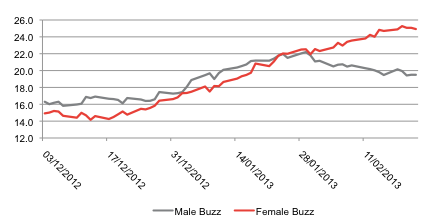 Moving ahead of Macmillan Cancer Support in terms of buzz raises an interesting question: Do different charities in the same area cannibalise support from each other? Our figures suggest that they don’t. The number of people who would recommend each charity to a friend broadly moves in tandem, implying what is good for one is good for the other. A large part of this is driven by the charities marketing themselves as providing different functions – one is research, the other is care. 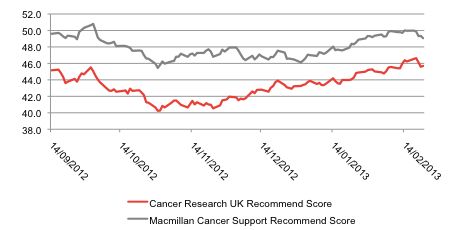 It has not all been plain sailing for the charity, though. At the end of January the ASA banned Cancer Research UK’s "It doesn’t matter to me who you are" circular. The censure received media pick up in the charity and marketing media, with Marketing Week carrying an article supporting the charity’s innovative approach.

Our data suggests that while the story interested the charity and marketing press it did not have a significant impact among the general public. While Cancer Research UK’s buzz Score fell from 22.4 on the day the ruling was handed down to 21.9 the day after, this was still higher than the charity enjoyed throughout much of the previous week. SoMA findings back this up. Throughout the week of the ruling the most popular terms used by people tweeting about Cancer Research UK were associated with either Dryathlon or Race for Life. The criticism of its direct marketing didn’t gain any traction.

This winter Cancer Research UK has clearly found ways to build momentum, make connections and spur donations among the public. The big thing now is to see if they can maintain this level of support into the spring and summer – the launch of the Race for Life advertising activity suggests they could.