- This article was corrected on 23 April 2013; please see final paragraph

Last October, ITV's Exposure programme carried evidence that Jimmy Savile was a serial sex offender. In January, a joint report by the Metropolitan Police and the NSPCC found that he is thought to have committed more than 200 offences.

This month’s Brand Watch looks at the impact of the scandal on NSPCC and ChildLine over the course of the past six months in the aftermath of the Savile revelations. While technically NSPCC and ChildLine are interlinked – the former took over operational responsibility for the latter in 2006 – we will treat each as distinct entities. The past six months are interesting from a charity branding perspective as it allows us to look at a parent brand (NSPCC) and the sub-brand (ChildLine) and see how they both fared.

Both the NSPCC and ChildLine were involved in the aftermath of the revelations, with contrasting fortunes. The NSPCC worked closely with the police to compile evidence and the report into Savile's offences.

ChildLine was prominent for another reason. The charity has always encouraged children to contact it to report abuse, but its founder, Esther Rantzen, admitted in the ITV programme that she failed to report concerns about Savile's behaviour. This prompted stern criticism from some quarters, with Katy Brand asking in The Daily Telegraph how the ChildLine founder "could possibly ignore 'green room gossip' about Jimmy Savile's alleged abuse of young girls". Rantzen admitted she feared for the organisation's reputation.

CharityIndex figures show she was right to be concerned. Buzz scores for both charities – measuring whether people had heard something positive or negative about a brand – show they went in different directions. There was an immediate and negative impact for ChildLine, while the NSPCC's role in helping victims led to a more subtle improvement in score. 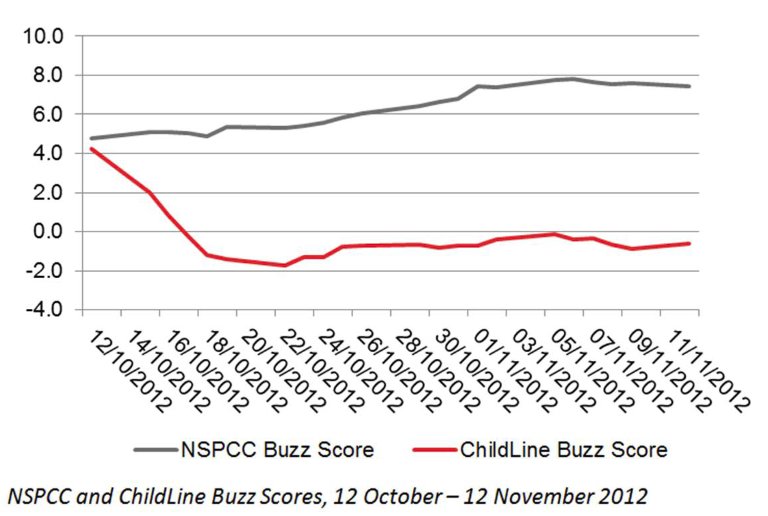 The impact was such that people's desire to donate money to ChildLine decreased. Meanwhile, the public's willingness to give to the NSPCC showed a slight increase, but remained broadly stable. 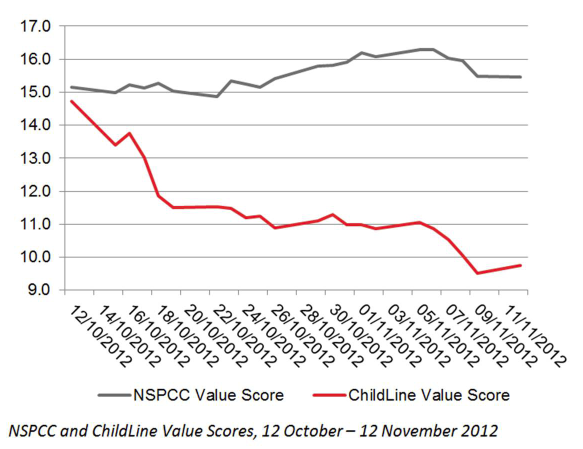 In the immediate aftermath of the Exposure programme, ChildLine took a hit among people who donated to children’s charities. As donors became less likely to give to ChildLine, they became more likely to contribute to the NSPCC. Although its levels stabilised and broadly moved in unison with the NSPCC, ChildLine’s numbers were greatly down on where they were. 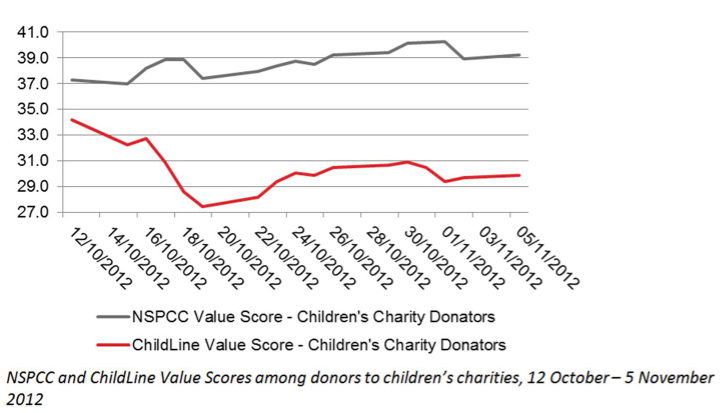 A lot of the NSPCC’s activity was related to its Christmas/New Year advertising campaign, focussing on the theme Don’t Wait Until You’re Certain – a curious echo of Esther Rantzen’s reticence to report suspicions about Savile. By contrast, for its festive campaign ChildLine focussed on a different and distinct area – self-harm among children.

The NSPCC and the Metropolitan Police published a joint report into Jimmy Savile’s crimes in early January. As the data below shows, this was the high point of positive impression among the public for both charities and the NSPCC and ChildLine have now settled back in to where they were in early October. 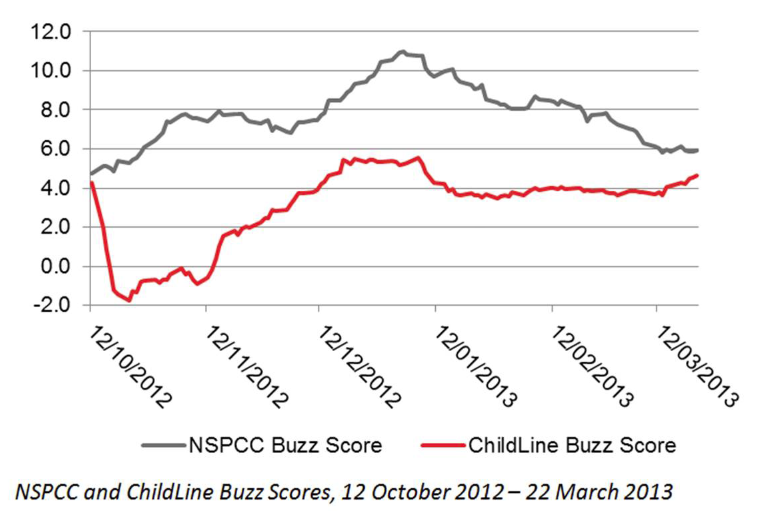 The willingness to donate to the NSPCC among those who usually donate to children’s charities increased in the autumn post-Savile and was followed by a long down period across Christmas. It only picked up again when the charity relaunched its Don’t Wait Until You’re Certain campaign after release of its report with the police in early January. 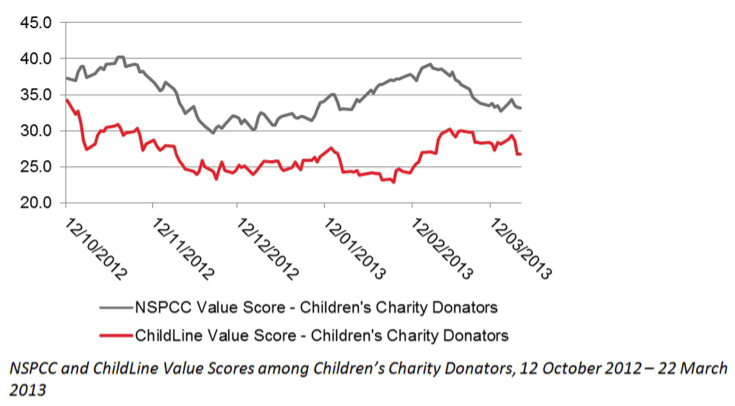 It would be easy to say that the impact of the Savile scandal on the NSPCC and ChildLine has receded and things are now back to normal for both charities. However, this would overlook a couple of important points brought out by the data.

The furore over Esther Rantzen in the aftermath of the ITV programme exposed an unexpected weakness in ChildLine, namely the problems of a brand being so closely associated with one person. It showed that if anything happens to your figurehead’s reputation it is likely to have an adverse impact on the organisation.

But the Savile scandal also showed ChildLine’s strength as a distinct entity. It is a positive for both brands that people view the two charities as separate organisations. ChildLine recovered its lost ground with its self-harm awareness campaign, displaying how it differed from the other charities by doing what it does best – helping children talk about their concerns and issues. The separation also allowed the NSPCC to undertake its task in helping the victims and the police deal with the flood of revelations without the distraction of the media scrum around Esther Rantzen.

Hopefully, the Savile scandal will prove a watershed in the reporting of child sexual abuse in the UK. Both ChildLine and the NSPCC have prominent, positive and distinct roles to play in making sure it is.

A chart and a paragraph referring to people's willingness to donate to ChildLine has been removed and the following paragraph amended on the request of YouGov because of an issue with the sample group used.