Since Help for Heroes was founded in 2007, it has grown to become one of the most high-profile charities in the UK. Due to its assocation with The Sun newspaper, regular support from celebrities, politicians and royalty, it has a high media profile nationally and features regularly in the regional press. This broad range of coverage is representative of how it raises funds - both with large, national appeals, as well as smaller, more local fundraising.

This month's Brand Watch assess Help for Heroes from early August 2012 to early June 2013. During this time the charity was in the public eye for a number of reasons, from the allegations aired in a BBC Newsnight piece, to a swell of public donations following the murder of Drummer Lee Rigby in Woolwich.

Last August, BBC2's Newsnight broadcast allegations about Help for Heroes spending money on recovery centres that could be put towards prosthetics and treatment for veterans. The story was picked up in a range of titles, including The independent, Metro and The Sun. Despite the backing of Lord Dannatt, former Chief of the General Staff, and Help for Heroes' founder Bryn Parry stating the organisation spent its money wisely, its reputation was damaged.

It is clear that the media attention led to a rapid decline in Help for Heroes' Buzz score - a measure of whether people have heard good or bad things about an organisation. It fell from 16.2 on 14 August to 3.7 just nine days later. This was mirrored closely by its Index Score, measuring overall brand health, that declined from 32.3 on 13 August to 27.9 10 days later. 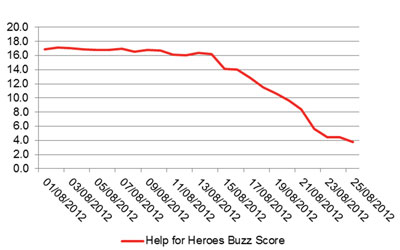 The impact of the Newsnight report was alleviated in late August and early September by a sweep of positive press coverage of the charity's work with Britain's Paralympians. The Buzz scores for this period show that the Paralympics had a positive impact, although the charity didn't quite recover all the ground it lost as a result of the Newsnight story, reaching 16.0 on 13 September compared to 16.2 on 14 August. As the Games closed, the levels of public attention quietened, falling back to 12.5 by 23 September. 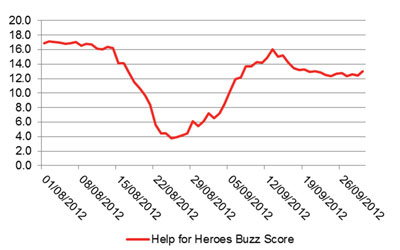 The post-Paralympic lull lasted for about a month before a steady improvement in Help for Heroes' Buzz Score over the autumn and winter. The data suggests that this increase was not really to do with media coverage around veterans for Remembrance Day (unlike the Royal British Legon, which saw an increase in its Buzz Score of 6.5 to 27 between 24 October and 23 November). Instead, Help for Heroes' increase was driven by continual, well-publicised activity from the Help for Heroes Day on Smooth Radio in September, to a sailor taking part in the Sydney-Hobart Yacht race in December, as well as involvement in The Sun-organised Military Awards. 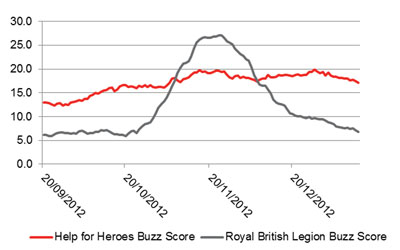 On 16 May, the BBC formally apologised for its Newsnight report. The apology received widespread media coverage from a range of media outlets and made an impression on the public, with the charity's Buzz Score improving in the aftermath of the BBC's statement. However, its impact was eclipsed on 22 May when Drummer Lee Rigby was murdered in Woolwich, south-east London, while wearing a Help for Heroes T-shirt.

The tragedy saw an influx of donations to Help for Heroes, as it was suggested that making a contribution to the charity was a fitting tribute to Drummer Rigby. However, it is clear that it was not just donations that increased after 22 May. There was also a surge both in the number of people who said the charity provided a good service and the number who said they would like to work for it, as shown by the Satisfaction and Reputation Scores. These measures are at their highest level since tracking began last summer and far ahead of the levels of the Paralympics last September.

These increases in support for the charity are also likely to have been abetted to some extent by the Hero Ride cycling fundraiser that took place on 2 June. Whether these shifts in perception will be maintaiend in the long-term remains to be seen. 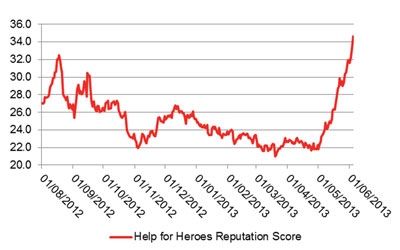 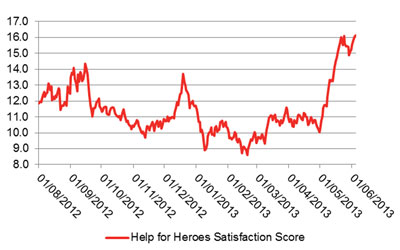 Help for Heroes has a higher media profile than a lot of other charities, both on a local and national level. This is probably why the impact of the false Newsnight allegations were so damaging to the organisation - at least in the short-term. However, its strength is its ability to let the public know what it does in a practical way to transform the lives of those it helps, as well as showcasing the fundraising efforts of its volunteers, often extraordinary people undertaking extraordinary feats.

What happened after Woolwich fits in with this. The wave of public revulsion that followed Drummer Rigby's death was matched by one of appreciation for the efforts of soldiers and veterans' charities - Help for Heroes in particular - to improve the lives of those they support. As long as Help for Heroes continues doing what it does it is saf to say it will continue to enjoy widespread public and media support.

Help for Heroes says: "The achievements of the wounded men and women are astonishing and we are amazed how members of the public want to do their bit. We show the great British public who they are supporting, how they are helping and why it is so important.

"Although you rarely see pictures of the continuing conflict in Afghanistan in the news, it's clear from the YouGov survey that helping our heroes - whether wounded at home or abroad - is something the public are passionate about."