Macmillan Cancer Support is one of the UK's most successful charities, having increased its income by 13 per cent in the past year. It topped this year's Third Sector Charity Brand Index, beating Cancer Research UK for the first time in three years.

The charity's Not Alone campaign began in February with the aim of making sure no one has to face cancer alone. The campaign tackles the different types of isolation faced by someone with cancer and their loved ones in different parts of their lives. Most of the charity's brand work since then has fallen under the auspices of the campaign. This will be the centrepiece of the charity's activities over the next few years and marks a new direction in the way Macmillan presents its work to the public.

It is designed to motivate people to support Macmillan’s cause and, as such, is as much about spreading the word about what the charity does as it is about generating donations.

The campaign started with a hard-hitting TV advert, plus a lot of coverage for the story about the number of people facing cancer alone. Looking at Macmillan's attention scores, which measure whether people have heard anything about the charity over the past two weeks, this launch represented a big bang, followed by a lull before the next stage.

We are using a two-week rolling average for our charts and so there is a slight lag between activity and impact on the numbers. However, the impact is obvious, increasing its score from 21.9 on 8 February to 27.4 by the end of the month. Yet, by early April, this had fallen back to a score of around 22 again as the initial burst of activity came to an end. 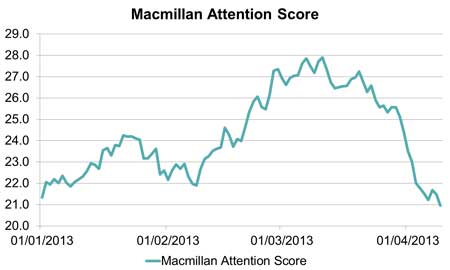 Of course, there is a difference between short-term bang and a longer term shift in peoples’ understanding of what a charity does. When we assess Macmillan’s impression scores for this period (measuring whether a charity supports a cause someone believes in) and break it down by income, a curious pattern emerges. Whereas in mid-January the scores for high and low income groups are equal (around 61), by late February a gap had emerged, with high income outstripping low income by 9-points. 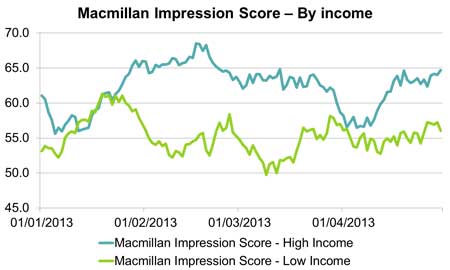 Since March, Macmillan has continued the campaign by looking each month at different circumstances in which a person with cancer might feel alone. This ranged from the cost of cancer, which took Macmillan on to the money pages of the Daily Express and Daily Mail, to how many people face prejudice when they return to work after treatment. In July, it showed how thousands face disability and poor health after recovering from the disease.

In addition to the news stories and regular advertising, Macmillan has also undertaken fundraising and awareness events, staging A Really Good Night In - in which supporters have social evenings at home to raise at least £100 - on 26 April.

From the value scores, which show people's propensity to donate, it seems the activity this summer has struck a chord with people aged between 35 and 49. In June there was a surge in that age band at about the time the charity released figures showing that by 2020 half of the population would get cancer in their lifetimes. 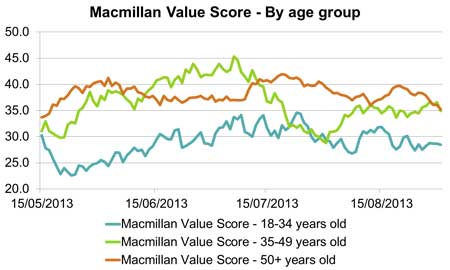 Not Alone is a long-term campaign for Macmillan, designed not only to raise funds and awareness of the charity, but also to inspire people to change their views of both Macmillan as an organisation and how people should face cancer. Due to these long-term ambitions, it will be interesting to monitor how perceptions of it change over the next couple of years. However, so far in the short-term it has been able to both integrate existing Macmillan activity, such as the upcoming annual World’s Biggest Coffee Morning, into the adverts and news stories that showcase the need for a community approach to deal with the effects of the disease.

The way different activity reverberates with different groups that perhaps previously would not have expected to engage with the charity shows that Macmillan has a first rate campaign tactics to go alongside its strong long-term brand strategy. With these things working in tandem it is likely we will see it topping the charity rankings in the coming years and also changing how people approach cancer.

Hilary Cross, director of external affairs at Macmillan Cancer Support, says: "Our Not Alone campaign is the first time Macmillan has truly integrated all of its activity under one unifying theme. No one should face can alone is much more than a brand strap line. It embodies what Macmillan is fundamentally here to do - through our wide range of services, campaigning and volunteering - and is an inspirational rallying cry for others to support us.

"At the heart of this campaign are the two million people currently living with cancer, their families and friends, and the very real issues they face. This number will rise to four million by 2030, posing a massive challenge for Macmillan. That’s why it’s vital we keep telling these stories in a compelling and authentic way, so we engage new supporters to our cause and can be there for everyone who needs our help now and in the future."