The sexual and reproductive healthcare charity does not spend a lot of money or energy on profile-raising to boost public donations, but its brand is in positive shape, according to YouGov's Briony Gunstone

Formed in 1976 to provide accessible family planning services, Marie Stopes International is now one of the largest sexual health organisations in the world, with a global as well as domestic focus. We will look at it from June 2013 to February 2014.

One of the most noticeable things about the charity is that it does not push too many stories out to the UK media. Instead, Marie Stopes International receives much of its coverage from offering comment on existing stories. For example, it commented on the once-a-decade National Survey of Sexual Attitudes and Lifestyles survey, and it also added its thoughts to the debate about changes in the abortion law.
The organisation’s namesake also generated some attention for the brand in January in an episode of Downton Abbey where her book was featured. While not going into the work of the modern day charity, it did bring the name to public attention and also discussed the area of women’s sexual lives. Following this, there was an uptick on some measures among younger people and higher earners.

It has also generated some adverse publicity. Last July a woman died following a visit to a Marie Stopes Clinic in West London after travelling from Ireland for an abortion. The incident received wide-spread media coverage with articles on BBC News Online, Daily Mail, Metro and The Guardian among others. In February it was revealed that one of the senior team at the charity earned as much as £290,000 a year, receiving coverage in The Times and the Daily Mail. Of these two stories, the executive pay saw a greater impact in the organisation’s perception scores.

Its main campaigning activity has been international in focus in the form of its #makewomenmatter activity that calls for greater reproductive choice and reducing maternal death rates in the developing world. The global focus for much of its outreach is evident on its YouTube page, where all of the recent uploads feature stories from the developing world. Its international work has been the subject of in-depth articles on the Guardian about the organisation’s efforts in Ghana as well as its activities in Ethiopia.

Index Score
Marie Stopes International’s brand is in generally positive shape. Since June last year it has remained pretty stable, having an Index Score (measuring overall brand health) between 6.2 and 8.1. However, by looking at the Index Score by income it is clear that the organisation is better thought of by people on a higher income than those earning less. The average Index Score among higher earners in the period we are looking at is 8.2, compared to 5.7 among those on a lower income. 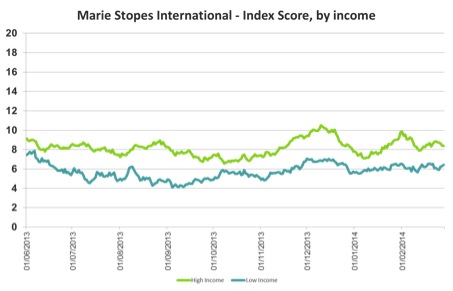 Awareness Scores
Although the organisation offers services to men, its predominant focus on female heath means it is perhaps not that surprising it has higher levels of awareness among women. However, looking at the organisation’s Awareness Scores by age shows that the group with the highest levels of awareness are the over-50s and the group least likely to have heard of Marie Stopes are 18-34 year-olds. 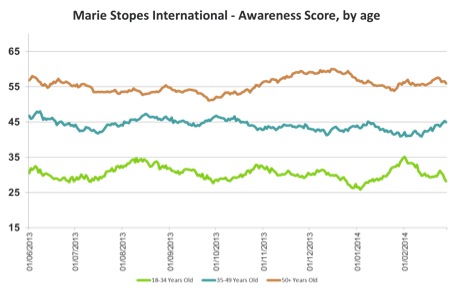 Value Scores
On the face of it, Marie Stopes International’s operations in the UK do not seem to be geared up to get people to donate. On the webpage the donate button is on the campaigns page around their efforts to improve sexual and reproductive health services in the developing world.

Given the lack of a donation "push" in both its activity and its collateral, it is perhaps not that surprising that the organisation’s Value Scores (that measure propensity to donate) are so low. Between June 2013 and February 2014 it had an average score of -0.5, suggesting more people are not considering giving money than would consider donating.

When we look at Value Scores by age an interesting pattern becomes clear. Despite having the lowest levels of awareness, it is the youngest age group that are consistently the most likely to donate to the organisation. By contrast, it is older people – who have the highest levels of attention that are least likely to consider giving money. 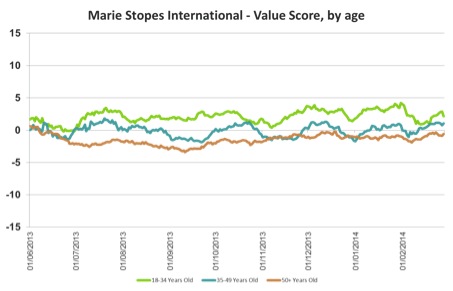 Conclusion
As a brand, Marie Stopes International is in an interesting position. Is it a domestic-focussed organisation that aims to educate and assist people when it comes to family planning and sexual health? Or is it an organisation whose main focus is on its global work in developing countries, helping secure rights for women and improving their reproductive health outcomes?

There is clearly a duality to its work. Given the often sensitive nature of its work and the people who use it, it is not surprising that it goes on with much of its work in the UK studiously but without a great deal of fanfare. Yet in terms of driving forward its international activities it needs to create more noise at home both to prompt people to pressure politicians to make a change on the world stage and also to raise funds to undertake its work in developing countries.

Presently it has good awareness among all groups (especially older people), and has solid brand health (most notably when it comes to higher income groups). Both of these things will help with its work on the domestic front, especially if awareness among younger people can be increased. The awareness will also help with the lobbying side of its international activity but where it may need to look at is that few people currently have a propensity to donate.

John Lotspeich, director of communications at Marie Stopes International, says: "It is encouraging to see that our brand is in such good shape, particularly since we do not spend a lot of money or energy on profile-raising to boost public donations. The cornerstone of our work is choice: ensuring that women and couples, in the UK and around the world, can access affordable modern contraception and choose the most appropriate method for their lifestyle and stage of life.

"We focus on promoting our services through stories such as the anniversary of our Belfast clinic in October 2013 and our Make Women Matter campaign - all to focus on delivering sexual and reproductive health and rights and an end to unsafe abortion."

YouGov's CharityIndex questions a representative sample of 125 different people each day on subjects such as the charities they have talked about with friends and family and the charities they have heard of. The results are compiled to generate scores about the public's perception of an organisation.
Communications Branding and Reputation Health & medical Brand Watch Expert comment
Tweet