The National Trust was founded in 1895 with a mission to "preserve and protect historic places and spaces – for ever, for everyone." It is one of the largest organisations in the country with almost four million members, 70,000 volunteers and its magazine is the most popular in the UK. As the charity gets ready for its summer activity, this month’s Brand Watch looks at the public’s perception of the National Trust between June 2013 and March 2014.

The Trust has a high media profile both from its own proactive efforts and also from reacting to and commenting on events. Whether it is announcing the formation of the Wild Network to get children outdoors, having a prime time documentary airing throughout the autumn on ITV or launching a campaign to encourage the public to walk, it is in the news most weeks if not most days.

Given this media profile it stands to reason that its Buzz score (measuring whether people have heard or seen anything good or bad about the charity over the previous two weeks) is positive. It has an average score of +4.7, although as the chart below shows there are several peaks and troughs in this. The most notable dip came in late September throughout October when it fell from +6.4 on 27 September to +3.0 at the end of October. As we will explore below, several news lines collided at the start of the autumn that produced this fall. 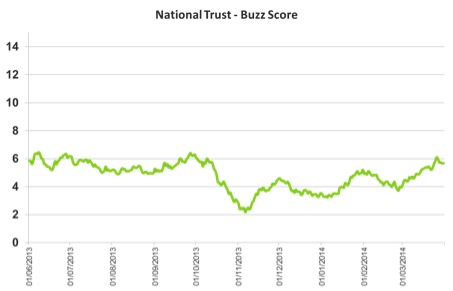 The charity faced criticism at the start of October after it was suggested that the Director-General had said the organisation had an "open mind" about allowing fracking on its land. The comments were questioned by environmental commentators, not least George Monbiot of the Guardian. The National Trust’s head clarified her and the charity’s position in a response to Monbiot’s piece, saying that the organisation was not 'anti-wind, pro-fracking' and that the Trust had not changed its policy on the issues.

The charity launched the London Project to challenge what the National Trust does and who it does it for; essentially trying to get more people – especially younger people – to explore the places and spaces around them. While the project has seen the organisation open up many sites, the one which received the most press attention (and criticism) was to invite people to look around the Big Brother house. Former Conservative minister Anne Widdecombe said she didn’t think such projects were part of the Trust’s mission and a Tory MP called it a "hare brained scheme."

As a large rural landowner and conservation group, it was reported in September that the National Trust was "split" over the trial badger cull. When the parameters of the trial were amended, the organisation’s Director-General wrote to the Environment Secretary requesting assurances over the standards of scientific rigour in the conduct of the programme. Just after this, in a non-binding ballot at the Trust’s AGM, members voted against a bovine tuberculosis vaccination programme on all its land.

The impact of all of these stories on the Trust’s reputation was varied among different income groups. In early October there is a noticeable spike in the organisation’s Reputation score (measuring whether people would be proud or embarrassed to work for the charity) among those earning less than £25,000. This is less likely to be that they are pro or anti-fracking or pro or anti-culling and more that this was the time when ITV started airing its documentary series.

However, while those earning between £25-49,000 saw a slight initial increase in Reputation score it was short-lived and went into decline soon after. There was no noticeable change among those earning above £50,000. 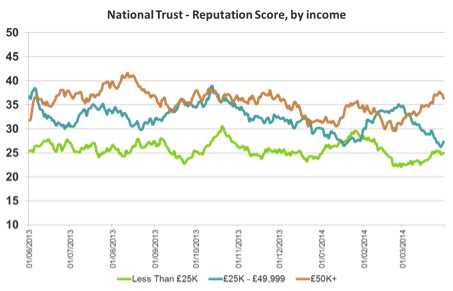 The stormy and wet winter saw the charity receive coverage for the damage done to its properties and land. The Trust lost the most trees on its property than at any time since 1987, as well as wide-spread flooding, including at a historic garden. As one of the biggest owners of coastline in the country, it was also inevitable that the severe weather that battered the country during the early months of 2014 would affect it, and the organisation’s coastline suffered years of erosion in hours of storms.

The weather damage in February appears to have had a pronounced impact on the Impression scores (whether people feel positively or negatively about a brand) among people earning between £25-49,000. The measure rose from +23.5 on 29 January to +35.1 on 26 February, implying that many people were reminded through the coverage what the Trust offers the public. In the same period, the score among those earning both more and less stayed relatively stable. 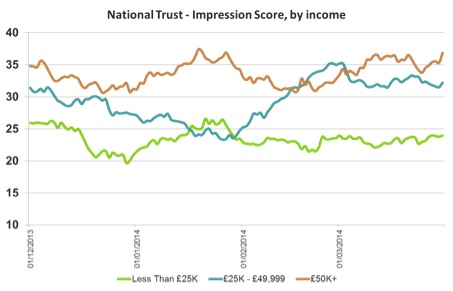 As well as the London Project, the Trust has also reached out to young people in other ways – either deliberately or incidentally. In November one of the Trust’s most famous places, the Cerne Abbas Giant, was given a giant moustache to mark Movember. In late February a fake National Trust advert – purportedly aimed at young people – went viral, leading to wide-spread coverage, with the charity itself commenting on it. Also, in an attempt to bring nature to young people who never get out of the city, the organisation also commissioned a beatboxer to record an album of nature sounds.

What impact did the Trust’s efforts with young people (both knowing and unknowing) have on under-35s’ general view of the charity? The London Project saw a small, un-sustained, bump in the organisation’s Index score (measuring overall brand health) in mid-September. However the viral video saw a more noticeable peak in late February/early March, just as there was a slump in the Index scores of 35-49-year-olds. 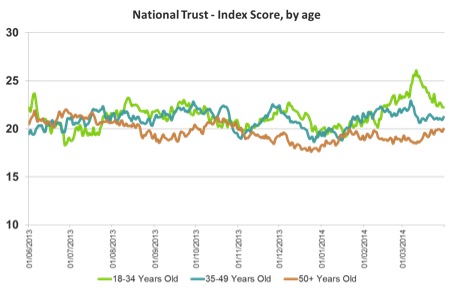 The National Trust has a strong brand and a high media profile – both through its own activity and campaigns and also incidental coverage (such as the viral video). Thanks to both the scale of the organisation and its breadth of activities, it holds a special position as a charity, meaning that many issues cross its path on a regular basis. On the whole it manages this well – as evidenced by its strong brand health and broadly positive coverage.

However, given its scale and influence it means it is noticeable when it attracts any negative publicity (as with the fracking incident). Despite some mild controversy about some areas of its campaign to attract younger people, it seems to be making some headway among this group. The only slight area of concern could be that this incremental increase in brand health among 18-34-year-olds has come at the same time as a small decrease in its Index scores among the over-50s.

Daniel Dodd, director of communications and content at the National Trust, says:

"It is encouraging to see the robustness and positivity of our brand coming through these results. Also that our work with younger family audiences and in London with younger urban audiences is beginning to shift ‘brand health’ measures. Our vision is that special places matter in people’s lives whether that is about reconnecting children with nature or working to create a healthy and resilient environment for people to enjoy. In the last few years we have stood up more publicly for these things with a louder campaigning voice and have taken positions on planning and development, climate change and the importance of renewable energy.

"The recent extreme weather gave us the opportunity to talk about these issues and create content around the impacts on our places. This survey suggests the approach was powerful with audiences. We are Europe’s biggest conservation charity with 350 major properties, a quarter of a million hectares of land and 740 miles of coastline so when we say things people tend to respond. We carefully track our brand positioning and media positivity and we know that despite the occasional flurry we achieve around 98 per cent positive or very positive media coverage."

This article was clarified on 13 May 2014. The paragraph beginning "as a large rural landowner" replaces one which read:

As a large rural landowner and conservation group, it was reported in September in the lead up to the National Trust’s decision on the badger cull that it was split over the issue. As the cull approached, the charity voted against a bovine tuberculosis vaccination programme on its land. Once the cull was underway, the organisation’s Director-General wrote to the Environment Secretary  requesting assurances over the standards of scientific rigour in the conduct of the programme.