The animal welfare charity uses media activity to educate owners about how to care for their pets rather than to drive donations, finds YouGov's Briony Gunstone

The People's Dispensary for Sick Animals (PDSA) is the UK's leading veterinary charity and was founded in 1917 to provide care for sick and injured animals of the poor. Its mission is two-fold: to "care for the pets of people in need by providing free veterinary services to their sick and injured animals" and also to promote "responsible pet ownership." This month’s Brand Watch looks at how the organisation was perceived between June 2013 and the end of April 2014.

The charity does not seem to directly use its media activity to drive donations, instead using direct marketing for this purpose. While voluntary contributions make up the majority of its income, PDSA receives substantial revenue in the form of legacy donations. It is likely that their donations – both voluntary and legacy – come more from those who have had personal interaction with the charity when helping them directly.

The PDSA’s media activity is therefore less about driving funds and more about highlighting how special animals are and also educating pet owners about how best to care for their animals – essentially to highlight the second part of its mission statement. It would be logical to conclude that this is part of a longer-term strategy where the public associate the charity with looking out for their pet’s health, turning to the organisation when it is most needed. Once they have used the charity, they are then more likely to donate.

Throughout the year the charity issues a variety of awards to notable animals. Last September, a search and rescue dog in Scotland’s mountains was given a bravery award in recognition of his efforts in saving the lives of ten people. In December, a cat from Croydon was honoured as the organisation’s "Pet Survivor of the Year" after recovering from the effects of a fire.

However, the award that garnered the most extensive coverage for the organisation was the announcement in April that the charity’s 2014 Dickin Medal was being given to an army dog, killed while in Afghanistan. News of the award, which the charity says is the animal version of the Victoria Cross, received coverage in a wide variety of newspapers, including the Daily Mail and Guardian. It was also the subject of a feature in the Independent as well as the subject of a blog from the political editor of the Daily Telegraph.

The charity also runs an annual Pet Fit Club competition that aims to find the animals in the UK most in need of a health regime. The charity is very savvy when it comes to how the whole thing is rolled out to the media, maximising the exposure for each stage of the process and finding innovative ways to keep the over-arching story – animal obesity – and the charity in the spotlight as often as possible.

The annual Pet Fit Club is launched with a news story that highlights the scale of the problem of unhealthy pets in the UK. The finalists for the most-recent competition were announced in June, with the Daily Mail carrying a video of the chosen pets and the Daily Telegraph’s website carrying pictures of the finalists. A couple of weeks after this, the media carried further reports about one of the pets after it was revealed to be Britain’s fattest dog. When the winner was announced in November, the Daily Mail and Daily Telegraph covered the story, while the Independent ran a photo gallery of the finalists.

PDSA has an active press office that proactively pushes out a variety of stories that publicise the range of work that the charity does. In October, 100 wedding and bridesmaids dresses were donated to a PDSA shop, causing the charity to issue a press release and receiving coverage in the Daily Mail and BBC. As well as launching the Pet Fit Club, PDSA also uses research at other times of the year to talk about areas it is concerned about. It December, it released research that showed that one in three dogs don’t get to run off the lead every day, highlighting how a lack of physical activity can cause a psychological impact on pets.

PDSA has the strongest brand health (as measured by the Index Score) among 35-49 year-olds (with an average score of 16.4) and the over-50s (average score 16.7). The brand is markedly less healthy among the under-35s – most likely because this age group is less likely to be pet owners than the other two – with an average Index score of 11.0 between June 2013 and April 2014. 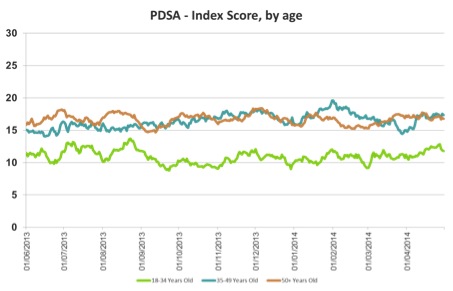 However, over the past eleven months, the 35-49 year-old age group is the one with the greatest propensity to donate to the charity, as shown by the value score. This age group has an average score of +5.7, compared to +1.9 among the over-50s. 35-49 year-olds reached their highest value scores in January possibly as this cohort took ownership of a raft of new pets they received or bought children for Christmas. 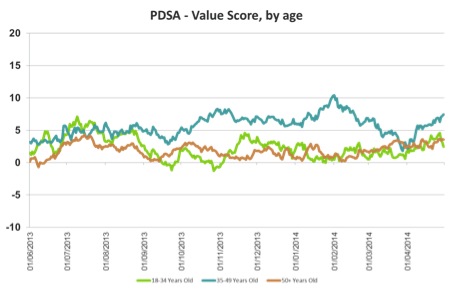 Due to its mission to care for the pets of people in need by providing free veterinary services, it is perhaps not surprising that across most measures, the PDSA scores highest among those on the lowest incomes. This is most evident when it comes to the reputation scores, where the charity has the best scores among those earning less than £25,000 a year and has the lowest scores among those bringing home more than £50,000. 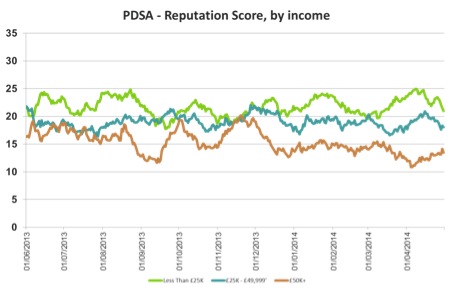 This is transferred directly across to the propensity to donate scores where the lowest earners are the group with the highest value scores (an average of +6.2) and those earning most are least likely to donate (an average of -1.3). 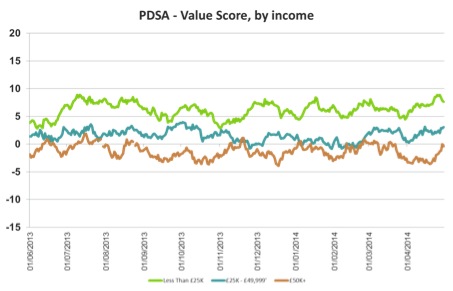 The PDSA’s media strategy is shaped by its mission statement in a very direct way. Given it cannot perform the first part (caring for the pets of people in need) through media activity it instead focusses on the second – promoting responsible pet ownership. The results show that the organisation knows the groups that both form its core user donor audience, namely older people and lower income groups.

By promoting responsible ownership to these groups (through things like the pet fit club), the charity will be front of mind should anything ever happen to their animal, and should they want to donate to a charity and have the resources to do so. The relatively low propensity to donate among older people is more likely to be driven by personal economic pressures, and the organisation’s high level of legacy donation implies that many people who are cash poor but have assets remember the PDSA in their wills.

Maria Heckel, director of marketing at the PDSA, says: "This report is a very accurate observation and reflects our own findings. The PDSA's public profile is overwhelmingly positive - about 99 per cent of media coverage and public comment is favourable, which is encouraging.

"However, we recognise that there is more work to do in communicating the work of the charity, particularly the PDSA's scale and impact. Last year alone we treated more than 470,000 pets through our national network of 51 pet hospitals, branches and more than 380 private practices."